Does the human soul really exist?

Seems pretty much everything is dependent on our physical body, if there’s damage to the brain there’s damage to our consciousness, and if someone has damage to a certain part of their brain or there is some restriction to it, it seems that does not change when they leave their body via projection, the state of their second body is still very dependent on the state of their brain. Some Taoists believe that when someone dies, their soul is incapable of containing memory as they lack the ‘hardware’ to store memories, which I guess would make more sense but much of it still doesn’t.

No the brain is said to be a receiver of consciousness. If a computer breaks, it does not mean the internet stops existing as well. Similar to that.

f their second body is still very dependent on the state of their brain.

Because the soul is still bound to the brain during projection.

Maybe the soul is something you have to create…Maybe the soul is what we strive to as an idea…
The soul or idea of makes the most sense as the field of data (like a morphic field) of the body that prevents u from walking through walls, and prevents ur atomic structure from just scattering…From this perspective, even a chair has a soul…beyond this point as the “transecndental idea” , I dont think so…

I dont think half of the ppl who use the word or beleive they have souls have them…What they wrap around the idea would have to be constructed…however if u beleive u have it, what work then goes into constructing a soul …which im gonna define loosely from the traditional perspective as a non physical vehicle of conscious awareness…

It’s a neat idea…but the complexity required to bring such a thing into being from being a base physical organism would be immense…Maybe with magick we can create a soul…???

Maybe with magick we can create a soul…???

In one of E.A.'s videos he had mentioned that Azazel has (or has access to) a “soul forge” with which a soul could be created.

Another topic related to this and thoughtforms is the tulpa. Some believe it’s just sectioning off a portion of your own consciousness, but others believe it’s essentially splitting your soul or creating a new soul. The tulpa sits somewhere between a servitor and egregore in some circles.

I believe there is a way to create/destroy a soul, and there is no distinction between human and other earthly souls because all life on Earth can be traced back to one primordial organism. (Food for thought: your life is connected through the entire family tree back millions of years to the first extant living organism on Earth)

Some souls may be recycled into new lives, but just like the eventual heat death of the universe, all things must come to an endpoint of stasis. Deific souls (gods, demons, etc.) are no exception in my eyes, but likely have amassed enough power/energy to increase their longevity in the plane of existence “loose souls” inhabit.

Do u think there’s a way to create longevity by feeding on souls so to speak? Sort of like a necromantic harvest of the released consciousness of the departed.

There are beings in various mythologies that consume souls, so it may be possible. I tend to look at mythologies as having at least some sliver of truth to them about at least one thing or another so it may be a thing.

If so, I’m not sure how a human would go about doing it. The closest thing I’ve heard of would be psychic/energy vampirism, as some (including Uncle Chucky) have reported the act does make you more youthful and energetic. That’s still a ways off from devouring souls, though.

Yes. That which is truly alive can never die.

A human creates a soul through using their own, i.e fragmentation of their own, not quite the same way a God creates one but pretty much close to the same as how a demon, angel, or something else would. The fragment is a ‘smaller’ piece of your own soul with a clean slate that you can either send off to reincarnate, put in a servitor to make it a living being, or even use it as a battery either way the first two mentioned the soul is bound to gain it’s own individuality.

However, a soul is not immortal a soul can be “destroyed” in the sense it ceases to exist as a soul, to consume a soul is to make it cease to exist as a soul, it becomes ‘digested’ and converted to energy for you, albeit consuming a soul too many times can have a more detrimental effect on your own. I.e that’s why mindless ‘ghouls’ exist in the etheric, from the over-consumption of souls.

Psy-vampirism does consume qi/prana/life energy, but some also consume emotional energy, sexual energy, etc. But not a whole soul.

Because the soul is still bound to the brain during projection.

If the brain is the receiver of consciousness, then why when you leave your body the brain suddenly becomes the sender? Things shouldn’t be so dependent on the brain when you leave your body if it is simply a receiver of consciousness, because now you have left your physical ‘hardware’, and from what I hear we see this with supposed ‘ghosts’ as well, they are much like their physical counterparts when they were alive.

However, a soul is not immortal a soul can be “destroyed” in the sense it ceases to exist as a soul, to consume a soul is to make it cease to exist as a soul, it becomes ‘digested’ and converted to energy for you, albeit consuming a soul too many times can have a more detrimental effect on your own. I.e that’s why mindless ‘ghouls’ exist in the etheric, from the over-consumption of souls.

Is it possible to consume a soul when it is still bound to a body? I remember in E.A’s ‘Become A Living God’ book he says the very advanced psychic vampire can consume someone’s soul (while they are still in a physical body).

However, I find it is possible to damage a soul of someone reincarnated, as I’ve taken to crafting curses centered around such for a more “long term” thing if I should ever decide to, of course I have had to test it. So I did test it on people I have less savory attachments to in the past, but I also tested it on a few human/nonhuman souls etherically. So while not in my opinion possible to consume a reincarnated soul, but able to make it deteriorate overtime, in my case the test made it deteriorate into these mindless parasites that exist in the etheric that are due to overly consuming souls, so I took that idea and made it into a curse, it works on the reincarnated and dis-incarnated, however, physical effects are usually a deterioration of their mental state or emotional state or both, while spiritually it’s a bit different yet similar.

If the brain is the receiver of consciousness, then why when you leave your body the brain suddenly becomes the sender? Things shouldn’t be so dependent on the brain when you leave your body if it is simply a receiver of consciousness, because now you have left your physical ‘hardware’, and from what I hear we see this with supposed ‘ghosts’ as well, they are much like their physical counterparts when they were alive.

There is still contention among groups whether the brain and consciousness are related in that way. To say the brain is the receiver/processer of consciousness doesn’t sit well with see who support the better-documented NDE cases because they’re clinically dead yet still consciously experiencing the world around them in an OBE during death while hooked up to machines that show they’re dead, no heartbeat, no brain activity, dead as a doornail.

Moreso I think the brain is a filter through which the soul processes the plane of existence we know as the universe around us (3 physical dimensions and the 4th dimension of time), while the soul itself exists on a higher dimensional plane. The soul is an entity of continuous experience, I think. That would potentially explain how it can separate from the physical brain.

I feel that when you have an OBE you aren’t experiencing what you think in real time, it just seems that way because the experience of the soul is being reported to the brain when you return to the body instantaneously, and the brain can only process the information the only way it knows how, which makes it seem like a realtime experience. This is why sometimes information comes quicker or slower depending on the person, i.e. intuition vs remote viewing respectively.

The embodied soul isn’t what carries the memories and energy signature between physical incarnations, based on what I have seen.

Human souls appear to be multi-layered things, some levels of them bear little to no resemblance to the “human” walking around on earth, and almost all people are a version of this: 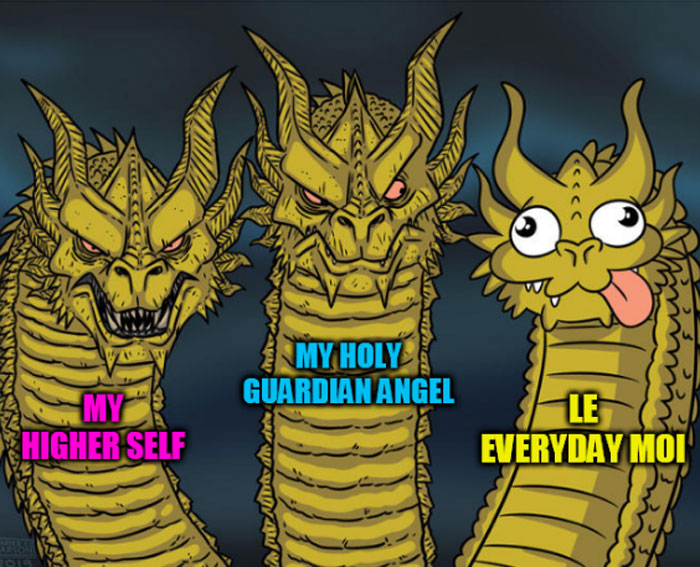 Source of my opinion: many years doing work based on core shamanism which encourages a degree of engagement with one’s own Higher Self and then also interacting with others.

@Lady_Eva Since you posted that meme, I cant relax without asking this, where does HGA and Higher Self differ? These terms really confuse me.

A possibility is that the body constitutes a limit to the soul which, after death, will be unrestrained. Other than that, indeed one of the spiritual schools of thought is that Man is one: no astral body etc. so no immortal soul as well; but, walking the Path, various manner of self knowledge (and consciousness) are possible, other than the physical one. These corresponds to the “bodies” and allow for a survival after the material death.

Sorry to say I’m not sure, I found the meme a while ago and saved it because it amused me, but I haven’t worked with HGA as that’s a very specific thing.

The HS & Everyday difference is pretty much well attested to in magick though, and I’ve posted methods of working with someone’s HS, most notably this:

Try evoking their Higher Self, imagine yourself in a temple space and see a light form on the ceiling of that space, call “Higher Self of (their name) appear before me” 3 times in your mind, visualise them come down from the ceiling as a wiser, calmer, more generally advanced version of themselves. First, thank them for coming and make a case for why your relationship needs to work, present this with passion and clarity as though you are appealing in a court of law for something. Don’t beg or …

@Lady_Eva Well, its better than nothing, thank you.

Yes a thing such as a soul exists. You have a soul within you . You can’t live if you don’t have a soul . What is a soul ? A soul can basically be considered to be energy. The energy and consciousness within you proves that there is a soul . Energy cannot be destroyed that’s why when you die there is a afterlife