Discussion About El, "God" And Source

In 1884, Helena Blavatsky, in volume two of her Isis Unveiled, citing Dutch Egyptologist Willem Pleyte (1836-1903) (Ѻ), on El, and Hodder Westropp and Wake Staniland on Phallism, stated the following view: [7]

Thank you for the reference.

But, if El is already an Egyptian god, why does he also get identified with Set?

There is not one god, there is a beginning which is the source, everything is an emanation of the source, now there are " gods ", a definition of a god is a being who has power over natural or supernatural forces.

But there is not one god, for I mean come on WE are gods in the flesh, as Ea Koetting said.

And this is of topic but don’t ever insult another member of the forum, if you can’t debate without trying to personally attack someone, then maybe you don’t have the intellect or logic to even be in a debate.

I have no belief in external divinity, as I’m sure most of BALG would align with… “No god before yourself” is what I usually say.

Do you know humans are divine . I mean our soul. We are no original sinners . Its a fucking lie. Through Meditation and yoga tantra etc we attain higher level of consciousness and move to higher plane of existence , the existence where gods live . We be like a God . But Godhead has been branded a shirk and sin in abrahamic faiths . We know that is a lie .

To give a rough analogy:

Ishwar = Allah of Islam minus the necessity to accept Muhammad as final Prophet.

In other words, If someone says first part of Shahada : lâ ilâha illallâh (There is no other God except one and only Allah) but rejects the second part : Muḥammadur rasûlullâh (Muhammad is his messenger), that is close to concept of Ishwara.

[]Sanatan Dharma and or Spiritual Satanism do not rests on historic events , the goal is to attain higher state of consciousness through Spiritual Practices like Power Meditations , Yoga , Tantra etc .

Abrahamic faiths state that there is only one life as a result there is urgency to have all sins and all merits accounted for after death.There is so much justice and inequality in life and all of this needs be reconciled by the “Day of Judgement” where God balances the scale of justice . On the other hand We SS aka spiritual satanists or Sanatan Dharmi know that the life we lead is just one of the many stories our soul goes through i.e. The Law of Karma .

Abrahamic faiths also reject the idea that there is any kind of oneness of the soul and God . hence it becomes easy for them to build this fake concept of eternal damnation in hell . We Spiritual satanists or Sanatan Dharmi knowing divine nature of soul do spiritual practice to attain a higher state of conciousness and realize the truth . []

Yajurveda 32.11
Ishwar resides at each point in universe. No space is devoid of Him. He is self-sustaining and does not need help of any agent, angel, prophet or incarnation to perform His duties. The soul which is able to realize this One and only One Ishwar achieves Him and enjoys unconditional ultimate bliss or Moksha.

That is the highest plane of existence wher You have one unique individual existence along with other gods.

What I was saying that The essence of SANATAN DHARMA / SPIRITUAL SATANISM is that there is One God One Truth and One Reality which is revealed in number of ways . This is the reason for this plurality in Hinduism for plurality in Egyptian religion. Different rishis , gurus , incarnations , gods , yogis , masters have delivered varied perspectives about the one truth .

This is in the English dictionary, these are the other definition of the word " God ". 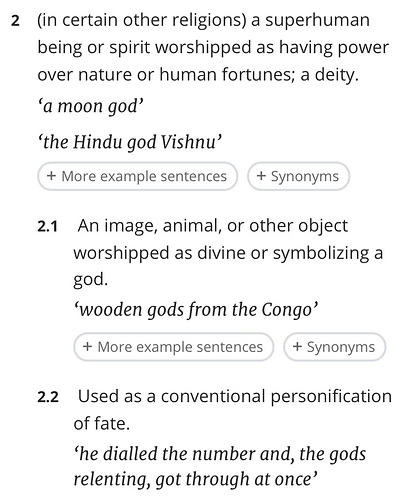 Also , Even Satan conforms to Vedic Practices fully where he states -

THERE IS NO GOD BUT MYSELF" “KNOWING THIS, WHO DARES WORSHIP THE FALSE GODS OF THE KORAN AND BIBLE?”
-SATAN
FROM THE QU’RET AL-YEZID

I fully agree with this . He wants us to elevate and attain a higher state of consciousness … Even Shiva /Satan meditates and does the acts of yoga tantra siddhi . Satan is declared one of the greatest yogis as per ancient far east hindu texts .

So you ignore two of my comments

Do you know humans are divine . I mean our soul. We are no original sinners . Its a fucking lie.

Of course I do. My goal is to elevate myself and my partner to higher consciousness. (Honestly if I didn’t I don’t believe I would be on this forum) As I said, “No god before yourself”. That is directly acknowledging we are divine by nature.

But I dont know what “the source” is. As I said, through practice and study I will find out eventually. But I’m contented not knowing.

It seems my response went over your head.
Or in one ear and out the other.

This is in the English dictionary, these are the other definition of the word " God "

I said there is no proper english equivalent of Sanskrit word Ishwara . I know there can be various definitions of God as per dictionary uwu

So you ignore two of my comments

Naah i ddint , but I got fingers to type lel and not a jet engine xD

But I dont know what “the source”

THERE IS NO GOD BUT MYSELF"

HAHAHAHAHHA thats hilarious that I say the same thing without knowing of that passage. This Satan guy seems cool

Look It’s fine to have you’re own opinion or even fine to back up some ancient or modern belief and systems.

But saying that " there is only one god ", is pure dogma, there is the source of all creation, that is purely called ’ the source '.

What you displayed was dogma, something that has enslaved and opressed our race for hundreds of years.

You need to understand that’s your opinion, it’s my opinion that chicken is the best thing ever, but I don’t go and tell that to everyone

Even science has not been able to answer it. I am presently studying moar about this and when I am done I shall be able to talk about this .

But saying that " there is only one god ", is pure dogma, there is the source of all creation, that is purely called ’ the source '.

Thats why I said there is no English word for sanskrit Ishwara. Ishwara and Gods are not the same things . Gods are those who have meditated and live on a much higher plane . We meditate to open up moar because they are subtle beings and cant be seen with our naked eyes. We make a pact with them / worship them so that they can help us be like them .

it’s my opinion that chicken is the best thing ever,

The source is just the source, scientists would call it the Big Bang, but in spiritual and magickal terminology it’s ’ the source '.

And yes KFC is fatty heaven.

The source is just the source, scientists would call it the Big Bang, but in spiritual and magickal terminology it’s ’ the source '.

No you misunderstand look the source is all, the thing that has always been eternal is the void, which is both nothing and all, at the same time.

But I know what you mean, plus quantum physics isn’t down right saying there wasn’t a Big Bang, I never said I believed in the Big Bang I used it as an analogy to describe what others think the source is.

Plus if you actually read what quantum psychics believes, is this " The new study isn’t suggesting there was no Big Bang, Koberlein says. It’s suggesting that the Big Bang did not start with a singularity – a point in space-time when matter is infinitely dense, as at the center of a black hole ".

This from the quantum physicist who came up with the theory you just stated.

But may I add that this is all science, this all theory talk, it has nothing but theory.

eternal is the void, which is both nothing and all, at the same time.

There is a quote: "all Gods are one God and all Goddesses are one Goddess, and there is one initiator. (Dion Fortune, in “The Sea Priestess”).