There is recently something that came to my mind, and I needed to talk with you about it.

When it comes to the vampire mythos, there is always one name that drops on every mouth : Dracula. Many US Occultists are surprised to discover that during the 20th century, the figure of Dracula has played a major part in european vampiric circles and wonder how much our forefathers have romanticized around a caracther that their own cinema have cherished. After all, some fictional caracthers such as the Old ones from the Lovecraftian lore have played an important part in the develloppement of some forms of Magick.

In the original Green Order ritual, a new adept entersinto the Vampiric Chain through an entity known as the Drakul or Dracúl, who offers him the Dark Gift of Immortality and the powers of his lineage. Within the Green Order itself, there is a real debate on the nature of this being. We know for certain that they made psychic contact with members of the Golden Dawn two centuries ago during their evocation sessions. As elaborated earlier, it is likely that the writer Bram Stoker was a member of the Golden Dawn, and that he used it as a basis for the creation of his character Dracula. To many members of the Green Order, the Dracúl is an Ascended Being. An Undead who was once the ruling warlord, or voivode, named Vlad III of Wallachia, a.k.a. Vlad the Impaler or Vlad Dracula, who became a most powerful Unknown Superior thanks to the acts accomplished during his material life. This is a consistent assumption, as the Voivode’s life is filled with clues connecting him to the Vampiric cult. In addition to his father’s membership in the Order of the Dragon, the main vector of Abramelin’s magic among the European nobility, Prince Vlad was notorious for his practice of impalement, including during his detention in the Hungarian jails. Few know that this practice was an integral part of ancient pagan custom from his Dacian ancestors. It was through this that they communicated with their god Zalmoxis and sent him messengers, who were said to gain immortality. Many of Prince Vlad’s detractors further described him as a Vampire and adept of Darkness. Its main fortress, Poenari Castle, is regularly the setting of events that can be linked to Initiatory Vampirism. The peasants of the region are reluctant to venture near the ruins of the castle, despite the fact that today it has become a tourist spot. According to the account of the Romanian historian Florescu, vampiric demonstrations would have taken place in particular among the Gypsies. An old Gypsy named Tika tells through the historian that when her father died at the foot of the castle, no cadaver raiders appeared, suggesting that he was fueled by the Magick of Undead’s condition. In 1969, two American filmmakers attracted by the myth of the vampire entered the ruins of the castle expecting to shoot there, but one of them fell and was hospitalized. The second committed suicide shortly after the expedition. The film on the castle was never made. But there is an even darker hypothesissupported not only by some occultists, but by linguists and bibliophiles too who have worked on the notes left by Bram Stoker from the original and unpublished version of his novel. According to the defenders of this idea, the Dracúl is not Prince Vlad, but a much older being. In Romanian, again, this name translates to both the Dragon and the Devil. The coordinates left by Stoker in these notes for the position of Dracula’s castle are latitude 47° north and longitude 25°75’ west. This position does not correspond to the location of Bran Castle popularized by the cinema, nor to the fortress of Poenari, but at a volcano called Peak Izvorul in Mount Calimani, part of the Carpathians mountains. This information was only revealed very recently by heirs of the Stoker family. In ancient times, volcanoes were seen as gates to Hell, and as the place where the Devil was likely to come out. It is possible that in Stoker’s eyes the character in his novels was a devil incarnate. In the ritual of the Green Order allowing the evocation of the Drakul, first comes into contact with an ancient deity, Zalmoxis, who is visualized as living in the center of the earth, surrounded by molten magma. This is a very strange coincidence, as Stoker’s notes were not made public until recently, long after the Green Order had ceased to operate. The evocation present in the ritual calls for the power of the being evoked in these terms:

From the Darkness of the Scholomance,

The mention of Scholomance is not trivial. According to ancient Romanian legend, Scholomance is a legendary school of Black Magick reputed to be ruled by the Devil himself. It is allegedly located near an unnamed lake in the mountains south of the city of Sibiu. In this secret school, which only admitted ten students at a time, the Devil taught the secrets of nature, along with the language of animals and spells. At the end of the course cycle, the soul of the tenth pupil was owed to him. Scottish author Emily Gerard speaks about it in these terms in the English magazine Nineteenth Century entitled, “Transylvanian Superstitions.” And while I’m on the subject of thunderstorms, I could also mention here the Scholomance, a school supposed to exist somewhere deep in the mountains where all the secrets of nature, the language of animals, and all the magic spells and imaginable charms are taught by the devil himself. Only ten students are admitted at a time; and when the course of apprenticeship has expired and nine of them are free to return home, the tenth is held by the devil as payment, and mounted on an Ismeju, he now becomes an aide de camps of the devil and assists him to “make time,” that is to say to prepare the lightning. A small lake, infinitely deep, located high in the mountains south of Hermanstadt, is supposed to be the melting pot where lightning is brewed, and in good weather the dragon sleeps under the water. The Drakul, could well be one of those tenth students whose soul was doomed to the Devil. It is interesting to note that in the myth of Scholomance, the role is to prepare lightning, which may also establish a connexion with Zalmoxis, often described as a storm god armed with a lightning bolt. Is this Devil simply a face demonized by Christians of the ancient God Zalmoxis, or a demonic and predatory being whose nature remains unknown? In the Ritual of the Green Order, the Dracúl acts as an initiator. After the Dark Gift is transmitted to the adept, the Drakul will live inside him and through him, with all followers of the Vampiric Chains. He is the Eternal Master who offers power and binds Initiates to one another. His nature remains a great mystery, which appears to adepts under different masks, but whose power is undeniable, hence his station as an Unknown Superior.

In my grimoire, Scholomance : the Order of the Dragon, the Dracul is the key the Gran Mysterie of Immortality and the vampiric chain. He is the iniator of the new adept and the master that assist the all process of his transformation. Discover the full magickal system of the Green Order, only on 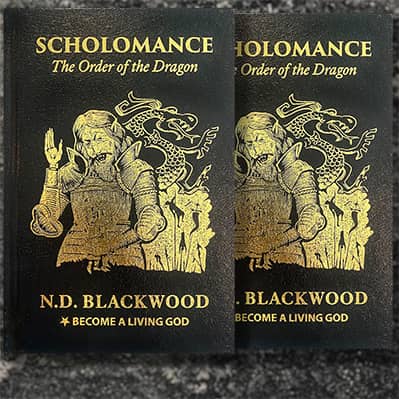 Scholomance: The Order of the Dragon | N.D. Blackwood | Become A Living God

Unmask the sinister science and occult history of the Vampiric Arts from The Order of the Dragon. Receive the Dark Gift of The Drakul for apotheosis in the Draculean Chain of undead Vampiric Adepts with Scholomance by N.D. Blackwood.

We’ll be waiting for you

The rest is complete bollocks.

Vlad The Impaler (Vlad Tepes) was nicknamed Draculea, not Dracula. His father was nicknamed Vlad Dracul. They were Christians, did not drink blood and were no vampires.
Vlad Tepes used to impale thieves, traitors of the country and enemies and leave them to rot at the city’s entrance to serve as warning.