This may seem like a silly question. Are all demons technically mages?

I wouldn’t say so. They have different skill sets, yes, but they’re more like teachers who pass their knowledge unto you than mages.

Now, there are entities which teach and do utilize magic. Marduk comes to mind. You could, technically, call him a mage.

I think it depends on what definition of demon you are using. Some demons are gods, some deamons (greek) might have had human incarnations but became so wise that they evolved into a different being that chose to stick around and teach. Some magicians may again choose to incanate into a demon upon soul evolution. So it depends.

Okay. Agerath/Agrat Bat Mahlat (Demon). Is known as the “Witch Queen”. Does that technically make her a mage too or is it just a title? I did research on her. She did teach magick to people. Can’t any other demon do the same?

What about Incubus/Succubus? They’re technically demons too. Many people say they that many of them have different skills. Are they all technically magicians? Agerath/Agrat Bat Malat is like Lilith. They both spawn incubus/succubus.

I mean if Agerath/Agrat Bat Mahlat the “Witch Queen” is a magician, then what about her succubus/incubus? I’m feeling embarrassed to ask honestly. I’m just going to have to ask her. I know really beautiful lady.

I would say no. Even if an entity was a human mage at one time it has ascended to a perspective beyond human appreciation. It is something different.

Saying all demons are magicians because they work some kind of magick is like saying all beavers are civil engineers because they build dams, just like a human.

Also consider that not all things considered “demonic” are of the same nature of entities as each other. To use a bad metaphor, some are simply different species.

It seems important to first define what a magician is.
A magician (IMO) is a physical person on this material dimension who uses dimensions/frequencies/vibrations of a higher level to bring his will back down to this material earth. As above, so below.

Also reminds me of the Magician tarot card and what it represents. Bringing WILL down to earth using all tools at your disposal. Demons and entities can and do have effects on the earth but I think the important difference is the starting position. Magicians’ starting points are physical/material/4th dimensional while demons are already in the place where the magic happens, floating around in the fabric of the universe (i don’t actually know where the hell they are).

Not all demons are magicians, but some of them are. And if you’re sensitive to energies and spirit energies, their magical powers is physically noticeable, and it’s much faster than a human magician because of their direct access to their dimension.

One of my spirit spouses is a magician, and she have this magical claw wand and the energy from that is very powerful. The physical characteristics from that wand looked similar to this: 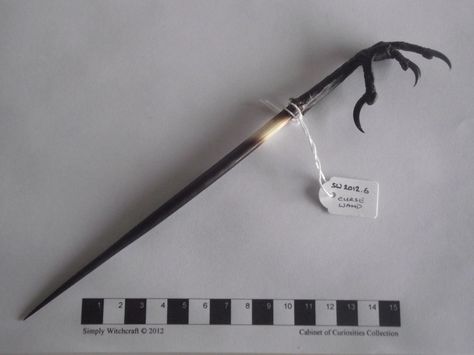 In comparison to human magicians, a spirit magician has direct access to the magical currents and doesn’t need rituals and other preparations. And they don’t have to negotiate with other spirits for results, either.

So much work. Do they have to work as hard as we do?