When it comes to Hinduism, there are so many spirits to work with each unique and different but most stick to the mainstream deities. However there are many lesser known deities in the path. One of these deities is Dee Baba also known as Madurai Veeran

As far as origin stories go, there are mixed opinions on his origin. Information online points to him being a folk hero who was abandoned by his family and raised as a warrior after which he fell for a princess and who fought of bandits from the city. He meets and falls in love with a dancer and is then executed making him a tragic hero. In another story, he was a brother of one of the forms of Shakti and he used to constantly get drunk, indulge in weed and fight on the streets. It reached the point where after many complaints, the Goddess made him guardian of her temple where he could get all the stuff he enjoys in return for acting as a gatekeeper. Many recongize him as an incarnation of Shiva.

This deity was one brought by Indian slaves to Africa and the Caribbean and his presence is strong. He is a protector of the land from spiritual forces and physical forces. He is very easily pleased and many offer him tobacco, alcohol (rum and whisky) and weed. Sacrifice of Roosters in his name is common but instead, he can be offered fruits and sweet rice (I use these offerings). As much as he is easily pleased, one should not forget him.

Now this deity works well for protection of your land. He is a powerful gatekeeper and has a brother named Munishwar. He doesn’t really help much in areas outside of protection but this is because that’s his preference. His workings are not to be taken lightly. He is called upon during Navaratri by men while the Goddesses are called upon by woman and only men are allowed to consume his offerings.

My experience with him has always been positive. I partly fixed one of his statues after a kid broke it and in return, when this guy was being an asshole to me, my Deity got enraged. I had to tell him to not harm the guy as I had a feeling that the guy would have had a terrible accident. The bully didn’t return to college though.

If you desire to work with this Spirit, please seek guidance from a Guru as I was born into working with him so yeah. Oh and this is one tradition I won’t break mostly because this is a dope God. 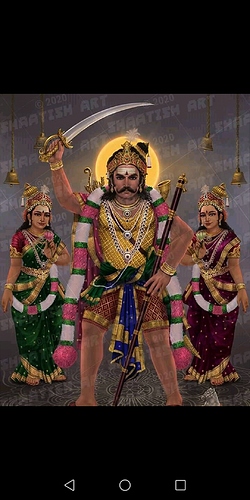 An image of him

For generations my family have done a rooster sacrifice every year. We offer biscuits with butter and Puncheon Rum (75% alcohol) along with flowers and white candle. Its quite sacred. I have seen him around from time to time, especially when my family (and I) are in distress. He is always there to defend and protect us. Other family members have seen him lurking around the house and yard as well. He’s always welcomed and friendly. I always have to make sure I let him know to allow other spirits to enter the premises when I practise rituals etc. Good post!

I find him to be a very underrated deity but then again, his workings seem to be generational. He confirmed the story of him as a Warrior being true and said that he was a normal human who ascended to Godhood due to his bravery and deeds kinda like Hercules.

I’ve seen him around too. He sometimes takes a ghostly form but I believe that this is to ward off dangers