Deciphering Sigils in the Goetia

Every attempt to find out the meaning behind the way in which the original Solomon sigils have been created, leads to the notion that the spirits have communicated their own sigils to King Solomon.

I say, FINE, but does anybody know what any aspect of the sigils mean? Specifically, if the sigil has a bunch of humps, or is less wavy and more ‘straight edges’, does it mean anything? What about sigils with dangling crosses, or the seals that have horns. There are sigils that are more symmetrical, others, not so much. Some sigils, if you squint, look like faces. Others look like they have a tail. etc. etc.

All sigils look quite distinct, but there does seem to be some repeated symbolism. Crosses, humps, circles (balls) , symmetry, non-symmetry, etc.

There’s got to be some meaning to this stuff. Does anybody have a clue?

Other sigils may make use of magic squares and all that weird stuff, but I’m talking about the King Solomon sigils specifically. (for now)

Any insight would be tremendously valuable.

Agrippa gave us a cheatsheet for some symbols:

Not sure if that’s helpful but I recognised some symbols from spirits I know, including my demonic Child, and it helped me “interpret” them.

This is pretty damn cool Lady Eva. Thanks!

Interesting read. Thank you for sharing.

This is something I have been really interested in of late as well.

I love the thinking behind the symbolism that was presented in those tomes.

I wonder if a correlation can be made between the description of each of the 72 spirits and their respective sigils. The typical references have short descriptions. I have “The Encyclopedia of Demons” , that aggregates descriptions of spirits from various sources.

Perhaps a combination of scrying with the sigil and contemplating the spirit’s description could lead to the discovery of a patterns that relate to Agrippa’s work. I’m looking beyond mechanical interpretation.

I may just ask Berith. He spontaneously came to me one night in the wake of someone else’s departure. He told me to contact him for help anytime. He seemed playful, always moving around and spoke to me in a nasally, (edit: yet clear) voice. I had no clue who he was, and was still in shock due to the previous visitor’s manifestation. As it turns out, Berith is the best ‘man’ for the job.

When I get around to this evocation, I’ll chime back into this thread with any info. I’ll learn as much as I can before contacting Berith. This can take a few days of prep.

A Global meaning, for example, is that they represent Levels of Frequency.
They exactly transfair, to certain Energy-molds of Light, Dark, Emotional…

A Single meaning, many of us allready know about:

The Seal of Lucifer:

It’s a Key, usable to construct the “Cup of life”, literally.

Some Sigils, can be decoded. Indeed.

Some, however, are like a exact constallation, of an Astral route, basicly like a Google Maps Routing, showing how to get to the target Point.
Of Course, These are also literally,
where one can travel to, and unite with, a certain intelligence, which is allready there, and allows to be activated by human conciousness.

there is also sigils, that unfold, once you use divine Mathematics, and Holy Geometry on them.

i’ve heard a legend, about a Magician, whom used his own conciousness, to direct frequencys to the universe.

I’m not sure, but it felt a Little, like he was similar to Solomon.

And how could i be sure, i’ve never met Solomon, yet.

You literally have Berith in your name. My goodness.

Thanks for the explanations. I hoped that the seals would have grandiose meanings. I am receptive to anything I can sink my teeth into.

The goal was for the seals to be more ‘real’ and in turn, more powerful to me. Your explanations are still mysterious (except for the magickal squares of course), but its enough of a handle.

When I look at the seals, many of them seem to reflect. Its as though my gaze and the seal are exchanging information. It sometimes feel like a hall of mirrors. Perhaps this is due to how I perceive the Solomon seals. After introspection, its clear that I have a deep rooted need for the seals to have a dual nature; to both tune the mind to welcome the spirit, and as a key, similar to a “true name” which is used to evoke.

When simply contemplating seals in general last night, an image of a flame appeared. Sometimes the flame stood tall, sometimes it was pushed to the left (by constant wind) and bent accordingly. The flame’s projection and surrounding darkness also moved. Sometimes it seemed to break into two peaks and a valleye could be seen between. Once it sputtered chaotically. Each of these poses made me feel a bit different because of the orientation of the wind, the character of the flame and the mood created by the interplay of light and dark as projected away from the flame.

It all seems to support, or at least hint to what you were saying.

it seems, one of my serviators initiates you.

sincronize your breath, with the Pulsation.

and think of seels as shakles.

shake em away, one you’re done.

I love it. Thank you.

Can any one help decipher this sigil 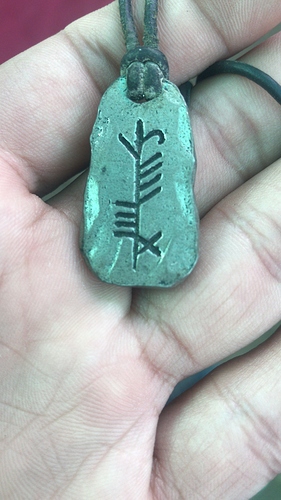 And decipher this too 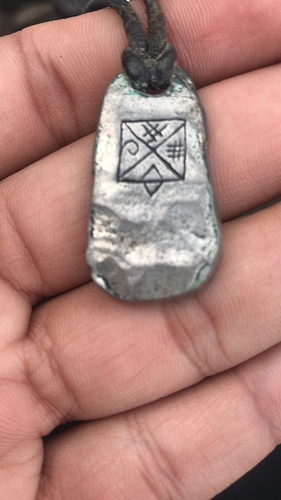 Interesting, I imaged searched them but didn’t find anything, but they’re definitely rune. Hopefully someone will know some closure about them for you.