How do I tap into the dark aspect of a benevolent goddess like Kuan Yin, Aphrodite for the purpose of evocation / invocation?

What name do you use to call them?

What characteristics could you expect from the dark side of an all loving being? The exact opposite?

Why don’t you try Kali? She’s the dark aspect of the benevolent mother.

I naturally go into Kali mode frequently because of natal astrological stuff.

Characteristics: bloodthirsty, will not stop until somebody is dead (whether that’s a literal death or just feeling like you’ve reduced a person to the point where they’ll never be a problem anymore). Rampage. Bringing out every weapon you have and going nuclear because you’re serious about putting an end to some shit. 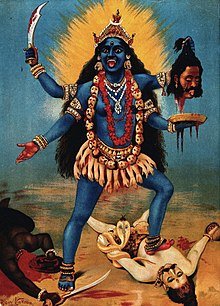 Dark aspect of Aphrodite I think would produce characteristics like the woman in this video:

As for the name of this goddess, or how to call her, somebody else will have to tell you.

Look at their myths and legends and see what traditionally pisses them off or if they have a named alter ego for their darkside. Those myths will also tell you what they tend to do in such a state.

I work a lot with goetic demons and I would not want to have any clashes between her and them. Although I must say…for quite some time I’ve been wanting to commune with her. I’m drawn to her like I’m fascinated hypnotically by her,

No but they will teach you the same concept but in a different way. For example Kuan yin is about forgiveness and compassion usually for others but at the same time she might trial you with the hardest thing of all making you face your shit making you seek forgiveness and compassion for yourself. She’ll probably give you a few head smacks along the way lol when you try to get out of doing it too lol.

This may be of use for you:
Statue of Kwan Yin (Quan Yin) a small round baking dish as a portable altar red candle and lotus flower. I use a plastic because there are no real ones here. I use “lotus blossom” incense. Place the altar at the front of the house inside on the left.
You could begin with thanking her for her attributes of love & compassion call her essence when you’re relaxed state works better if you are wanting to channel but not if doing a simple candle spell. She can help altar the home environment make you less reactive and put in perspective what would normally piss you off especially as a parent. She will after getting to know her be willing to share / gnosis things about you that you need to address.
Hope this is helpful for you. I have not seen much of her dark aspect but i dof know she embodies love & compassion protection for women & children.

Yes agree Kali will be if you are prepared to change yourself she will be there to assist you. If she likes you she will show herself … (well for me it was in a dream she just smiled at me & didn’t look scary at all).

I have no idea who or what that is

This is interesting since I imagined hugging her for some reason yesterday.

She’s truly wonderful. I don’t feel Chaos around her, I feel love but I know that she’s not a fluffy deity at all.

Like Satanswife said, heads will role. You don’t mess with her children or even her husband’s children. She doesn’t play around then.

It’s all one thing to me, so yeah