So I subscribe to a practice that doesn’t really touch upon chakras. I started to branch out this year, however, in an attempt to learn other practices, and am started to peruse the endless wealth of knowledge pertaining to chakras. As I started to delve into the fuckload of writings about them, I realized that my crown chakra is situated right where I have this severely tender piece of scalp.

And I mean really fucking tender. So gotdamn tender it bothers me, and I have a very high pain threshold. And it’s been that way for as long as I can remember, ever since I was a kid.

I’ve brought it up to doctors countless times, and they’re always fucking stumped.

The really odd thing about the pain, though? It makes me want to dig into my scalp with something sharp. Like there’s something buried under the surface. In fact, when I was younger, I used to tug at the hair around the area incessantly, only to cause more pain, but It would bring me relief, in a way.

I can think of a few things causing this, and I’ve stepped up my meditation game in an attempt to fix the problem, but to no avail. Has anyone ever faced this problem, and if so, what worked best?

It’s just a lot of clogged up energy - you gotta gently work it out. I get top of head pain sometimes too.

Try doing the full version of the AUM mantra, start with AW in your chest, move it up in the same out-breath with OOOO in your throat, then feel the MMMM coming out through your crown with your lips closed tight (don’t clench your teeth) - this may dislodge any blocks. Try one go with it and see if it helps, if it feels like it’s moving things in a good way, do 2 more, or as many as you feel are helpful.

Thanks for the advice, loves. I’ve been making progress little by little. I’ve actually been meditating on magical/enochian/angel squares and it’s helped greatly. The discomfort is still there, but it’s not as bad as it used to be.

Makes me wonder if some sort of energy blocks are the cause of trichotillomania (hair pulling), although usually it doesn’t manifest directly on top of main chakras.

If angelic energies are helping, it may be worth trying this:

Short and simple: I have some nerve problems in my back, and have found some success in chanting the syllables of Raphael's name - RA - PHA - EL and envisioning them wrapping the affacted area in a triangle, like the way words are written round the outside of a poker chip. I used the inverted triangle (like V) to bring energy "in" to heal a couple of times, and then I mainly used a point-up triangle (like ^ ) to regulate that energy and to heal it. Weird things happened like seeing the trian…

Hi EvelineJanus,
I work with Kundalini daily as an artist who paints the spiritual realm & a LHPer. I’ve uploaded this painting for you as it was something that helped me greatly. Many years ago I unable to express my creativity because of work, kids, life etc. I thought my head was going to explode because I had so much creative energy stuck inside me and this was my answer. It may not be relevant to you but I offer it to you to try: put it in your mind and let what ever happens, happen! I hope you problem resolves soon.
Virtue 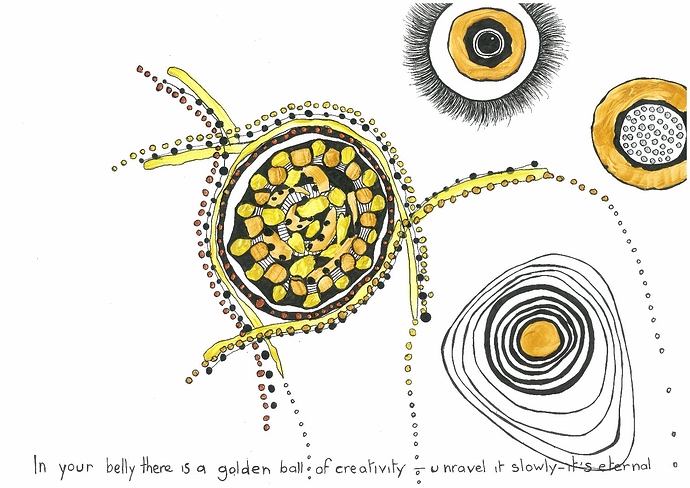 @Lady_Eva Gonna give it a shot later tonight. Truth be told, I’d never in a hundred years thought that angelic energies would help me. This experience really taught me not to knock it till I’ve tried it. Many Thanks.

@Virtuefern Thanks a million. Your artwork is beautiful. I will meditate on your piece, as I completely relate to the head exploding part.

Hi, I came across your post in a search to somehow gain some understanding of my own pain at the top of my crown. I too, have experienced this since I can remember, and when I begin to pay attention to it I can’t stop wanting to dig into the area to find some relief. The way you described it was so on point and really resonated. I signed up to the forum to post this, and wanted to know what has worked for you in clearing this? I’m just starting to think about finally delving into this mysterious sensation I’ve had for my whole life. Thanks!

Welcome to the forum @Gemmaborealis ! Please take a moment to click the image below and introduce yourself:

Hey, so i was working on my 3eye chakra for couple of days. And couple min ago i started to feel presure on my crown chakra. I dont get why? I was more expecting things like this happining around my 3eye.