Crimatheira the Crimson Goddess. A being I encountered a while ago and kept to myself for a time for more of an investigation. She is a vampiric spirit that has proven quite insightful on matters of internal alchemy and vampirism as well expanding your domain or empire.

I have observed her in multiple forms the usual being a beautiful woman with red hair and black eyes dressed in a dress of flowing black and red. I have thought she might be in some way connected to Lilith but investigating her I am getting none of the usual things associated with her but stuff that seems rather unique. For instance there seems a large connection to an outer sphere beyond the standard kabbalah or Qlippoth which as stereotypical as it is I still choose to name Nibiru for the sake of simplicity. There does seem many things that can fit into multiple spheres but don’t suit any single one. Other differences seem largely in personality, I do not have many dealings with Lilith but have had enough to get a good feel for when it is her or some aspect and Crimatheira simply does not match up despite certain similarities.

Her powers as said before seem to lie largely in works of alchemy and vampirism especially in dealing with physical and astral blood as well the use of emotions towards certain ends. She is not kind however and will test you only helping if you can prove yourself worthy or serve some goal to her. She favors to teach through possession using your body as a vessel to channel and demonstrate methods directly upon the world. If you feel you are ready for a challenge and can handle her teachings and have an interest specifically in vampirism and alchemy in relation to it then she would be an excellent next step if you need to be pushed to the limit.

A few things of note.
I do feel she has some connection to Sumerian magick by some of the images that appear when working with her though I don’t quite feel comfortable making too many comparisons.
Also despite her relatively distant sphere and possible difficulty in contacting her she is able to manifest some pretty impressive stuff once you have her attention.

Below is her sigil: 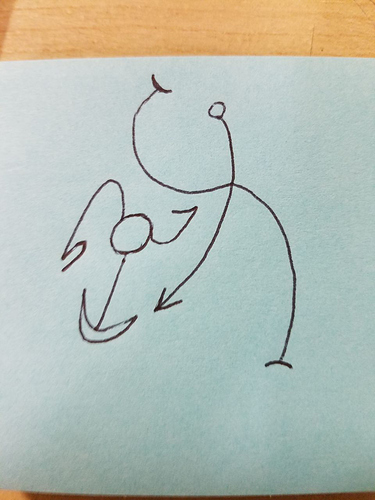 Bookmarked
Will do today

Crimatheira
"Vampires bloood dwells in you. Awaken it. You are not afraid, but you must learn to weild it with accuracy and as a tool. The astral blood awakens within you even now as we speak.

I will show you methods of astral blood letting and how to bend the blood of your enemies. Yes you can do that. "
(Part she tells me not to write. Private shit.)

She looked like a young woman with long bkack hair and a black and red dress. She had a scorpions tail that i saw as she was leaving.

She blew me a kiss as she left

Excellent!
Get ready for some strange things to happen and good luck. Look forward to hearing the end results when you get there. For me I got similar and some unique ways to use my aura.

I will show you methods of astral blood letting and how to bend the blood of your enemies.

Reminds me of an episode of avatar the last air bender when katara first used bloodbending. Pretty cool.