Hello!
I have always loved cats since I was a child and I always wondered why they were related to witchcraft.

The spooky history of how cats bewitched us

Witches have always liked cats. Sure, they’ve been known to hang out with a wide variety of creatures, including lambs, hornets and crabs. But felines are their favorite consorts, according to an academic analysis that tallied up animal “familiars” from 200 historic English witch trials.

Is anybody really surprised? The hags from Macbeth didn’t dunk their “brinded” cat in the cauldron with the newt’s eye and dog tongue – they preferred to keep it alive and meowing. In America’s Salem-era scares, witches made their child victims “purr like so many cats” (which, many parents might concede, is a far more melodious alternative to normal kid noise). Today, cats – especially black ones – still pounce upon us at Halloween time, in costumes and decor.

But why are our cuddly darlings, the most popular pets in America behind freshwater fish, so persistently tied to the occult in myth and history? Superficial feline characteristics can explain some of it. But perhaps the deeper link between house cats and black magic is rooted in the very real powers they have over us.

Objectively speaking, felines are more mysterious in behavior and exotic in looks than most of our other pets and domesticated animals. For one thing, cats are alert and active while we sleep, making them seem more likely to take part in clandestine midnight gatherings. They are also ambush hunters, prone to hiding in odd places and then making sudden, startling movements — especially on dark and stormy nights. Exquisitely sensitive, cats seem to commune with the invisible, precisely because they can see and hear things that humans cannot. Their eyes [glow at times], because a mirrorlike structure behind their retinas promotes their night vision.

Yet the glow is not the most unsettling thing about our cats’ eyes. Unlike tigers and jaguars and other big cats, house cats have vertically slit pupils, a common feature among small nocturnal predators that hunt close to the ground. What else has vertically slit pupils and also occasionally hisses? The serpent. And who made his first biblical appearance as a snake?

It’s not clear when Western Christians first picked up on this dark resemblance. While the Bible is full of felines, especially lions and leopards, it excludes house cats except for one iffy mention. In his book “Classical Cats,” the historian Donald W. Engels argues that ancient Egyptian religious traditions – which involved a whole lot of house cats — evolved into Roman-era pagan rituals, which competitive early Christians may have been eager to stamp out.

But it was in the Middle Ages that the tension between cats and Catholics began to escalate. In 1233, Pope Gregory IX’s “Vox in Rama,” a warning against the perils of witchcraft, accused its targets of canoodling with a black cat that was actually Lucifer in disguise. Although the pope also decried frogs and ducks, anti-feline prejudice quickly swept the church. Cats were burned and hurled from bell towers – a practice that is supposedly memorialized today in a bizarre annual festival in Ypres, Belgium. (Now, only stuffed cats are hurled, a reflection of our more humane age.)

Some historians, Engels included, even blame a resulting, continent-wide cat deficit for the subsequent devastation of the Black Death, thought to be spread by rats (though some research suggests cats can transmit plague directly to people). Left in peace, the thinking goes, Europe’s cats might have pounced upon the plague-ridden rodents, saving the lives of tens of millions of people.

Sadly, this idea doesn’t hold much water. Research has shown that cats are reluctant rat-killers at best, and cats that do kill plague-infected rodents often catch the plague themselves — and readily spread it to humans through fleas. It’s also highly unlikely that the ecclesiastical cat assassins, however hellbent, could have killed anywhere near enough cats to alter the Black Death’s trajectory. Cats are almost supernaturally good at surviving: Modern-day governments find it practically impossible to rid even small islands of invasive cat populations, let alone to purge a land mass the size of Europe. (It recently took several years and $3 million to rid one small California island of cats, which were dining on a threatened species of lizard.)

Finally, even at the height of cat-quisition, most medieval Christians probably still liked cats as much as anybody else and safeguarded their favorites from the fanatics. Indeed, Exeter Cathedral in southwest England even had its own cat door. Note that cats are not exactly rare in Europe today – and as the animal behaviorist John Bradshaw writes, black cats, generally thought to be the wickedest ones, are especially numerous in many places, with more than 80 percent of the of the population carrying black-coat mutations.

But let’s play devil’s advocate here. What if Pope Gregory was actually on to something? He may have had one perfectly sound reason to suspect cats of demonic mischief: allergies. Respiratory reactions to cat dander can be sudden and crippling, as University of Pennsylvania zoologist James Serpell has pointed out. Could this attribute have given the impression that a possessed cat was actually stealing a baby’s breath? In a world of limited medical knowledge, the frightening “hecticks and consumptions” triggered by the feline presence might have seemed downright malevolent.

Good thing most of us no longer believe in magic. Except that recently, scientists did stumble upon another real power of the house cat. Doctors had long known of a mysterious parasite that can cause grave birth defects in human children, but they didn’t know where it came from. It wasn’t until 1969 that scientists realized that this creepy disease, toxoplasmosis, which has likely influenced the human constitution since prehistoric times, was spread exclusively by felines.

In the decades since, the story has gotten even spookier. Human fetuses are not the only ones affected: Toxoplasmosis, some research suggests, also holds sway over healthy adults and has been linked to ailments from obesity to brain cancer to schizophrenia. Some researchers even think that the cat parasite can manipulate human personality and behavior, causing infected people to become “attracted” to cats, and to otherwise be maneuvered by them.

All of this sounds an awful lot like witchcraft.

Yet in the years after the first wave of toxoplasmosis coverage, people did not forsake their cats, any more than most medievals did after Pope Gregory’s dire warnings. Indeed, the 1970s were when cats’ popularity as indoor pets began to skyrocket.

Logic has its limits. We prefer to stay under cats’ spell. 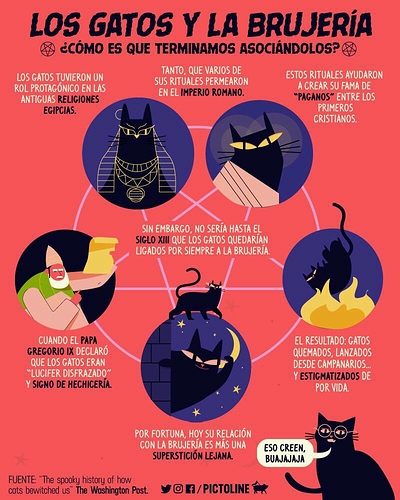 This thread has melted my heart.
Poor kitties and avoidable kitty deaths… Rest in Tuna.

right? The same happened to me!!

Growing up in a country home, and with my mother being “that lady that would take in strays when on one else would” I grew up amongst cats. Kind of like George of the Jungle, but with up to 10 indoor outdoor cats on average, plus my predilection for Egypt made for the Purrrfect devote of Bastet.

The best description of cats I have ever heard and it is so very very true is in the film Constantine. Cats are half in and half out of hell. They are most certainly on the dark side imo ( I have two one is now 19 years old and the other 17 old for domestic cats) and they can talk if they have mind to, but its telepathically. I could tell you stories you wouldn’t believe.

Tell me a story…or start a Cat

So cute!! I like Egyptian culture/history/religion etc, too…and always loved they had adoration for cats

“Thousands of years ago Cats where worshipped as Little Gods, they have never forgot this.” As the quote goes. And many feline Goddesses they had from Sekhmet to Qed-her. Something they knew about our feline friends that we have forgotten. Other old religions, like Thailand’s branch of Buddhism maintains that they, or more specificity tigers, are one of the few animals that can achieve enlightenment.

In the morning she wakes me up - every morning with the same ritual. go for a wee and she is there hovering around, but what she does is watches me wee and nuzzles the toilet seat which makes it fall and if Im not quick hits my willy. lol. Every morning the same ritual.

One night - this has happened only once - I was asleep and I was having a dream, I was in the desert, I was in this square space with like sheet barriers upto my chest in height all around me. One corner was pitch black - no light at all so I went over and out of the darkness came a voice - the voice was most certainly not human and it said - ‘I’mmmm hereeee…!’ I woke up and there no more than one foot from my face upon opening my eyes, there she was staring right at me. Was it her ? Did she speak to me telepathically ? Cats are spooky. I have lost things and wondered to myself out loud where the thing is - sometime later there she is playing with it in the middle of the floor. Did she know when I asked myself where the thing was. Did she hide it ? This has happened many times.

I have rescued mice before that she is torturing and am convinced they have thanked me audibly with a little thankyou. Seriously…! Its the little things - they creep up on you can scare the bejesus out of you and they KNOW what they are doing, oh they know alright. Cats are devious - selfish - devilish - cruel and so very very vain. They are manipulative - demanding yet elusive and mysterious.

If im doing a circle or magic they will immediately hover around watching and listening, often getting in the way, lol maybe even sniggering <-- sometimes I wonder. Life with cats (im on my own with my two cats) is an occult experience in itself.

The dobby one should be at 100 million views.

Yeah! lol
Check this out hehe