Couple snapshots of my moment with Belial

Tonight during the new moon I performed an invocation of Belial. I had been meaning to work with him for a long time and had been putting it off too long… I’m very pleased with how to ritual went, and I feel Belial and myself reached a perfect understanding of one another and agreement…

Here are a couple shots of a special moment with Lord Belial. 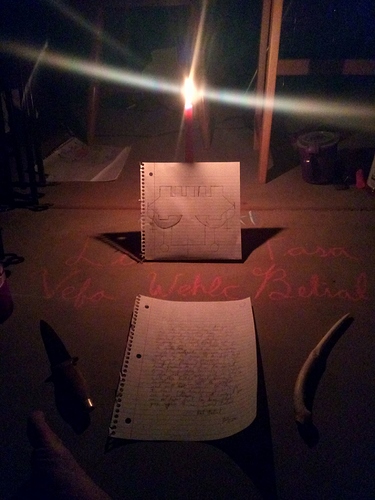 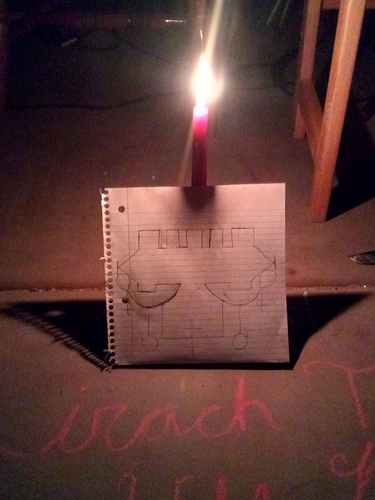 I knew Belial had been clearing some things from my life, and for a while, I was overwhelmed by it all. When I realized that all the wild changes in my life were the clutter and the bullshit being destroyed, I realized I needed to work more closely with Belial… I had Invoked him around a fire during a solitary ritual back around January. The ritual itself was amazing. Very empowering. But after that, other than communicating telepathically and being aware of his presence, I didn’t work any deeper or closer to him. There was a lot going on…

But I sucked it up and put forth a great amount of energy and effort to invoke him last night. We discussed my need to focus more and dedicate more time and energy to my magic. I told him that my body is his temple and that he can use me as a gateway or bridge anytime he desires. I made the promise to him that I will work on improving this temple for him.

He informed me that not only should I improve my temple in his honor, but that I should also realize that I am a Lord as well, worthy to be king and that this Temple is mine as well. I greatly respect and admire Belial.

I could feel and hear him clearly during the ritual. There was also this feeling of “It’s about time”.

Tonight marks an important step in my journey. I will be practicing my craft more and more from this point forward and will be giving thanks to and learning from Belial as often as I can.

He is showing me that I need to work harder to accomplish my ambitions in this life.

I do love Belial, an i can jus feel awesomeness for you sharing it here!
Really a beautiful altar and energy!

Wonderful and simple. My right hand is buzzing with energy looking at your picture.

Once I have some time tonight, I will upload more information on this work. Its been unfolding rather intensely. Very powerful. Working with him has helped to usher in a whole new chapter in my life, and performing the ritual on the new moon was the perfect timing. Thanks to @Lady_Eva for her reminder of the new moon. <3

I’m actually typing out a few stories on the computer right now explaining in detail some of the many experiences I have had in this life where I encountered other worldly beings (Deities, Vampires, Spirits, etcetera) in order to share them with a friend who is doing some real interesting work. So once I get some writing done, I’ll be back to expound on this story of Belial and Blake (myself)

I don’t see the demon in your picture just some candles and random articles… how do you know He was there? Where’s the proof that he even exists?

Is it possible for u ppl to give me some solid proof?

Haha… I mainly posted the images for others to get a glimpse into my ritual and feel the energy of the sigil if they so choose to.

I really do believe that if you truly wish to experience these things for yourself in a way that isn’t someone else sending something your way that you don’t necessarily want, you are going to have to do the research and spend the time and effort yourself in order to experience it… No one is going to do the work for you. If you want proof, seek it for yourself. If you require assistance or guidance in your quest to answer these questions, there are many who would help you, but you have to actually want the knowledge.

Also, the experience is very personal and varies between each practitioner… On top of that, explaining how I “know” a spirit is present can be difficult, especially explaining it to someone who keeps a wall in-between them and the answers they claim to seek. Having an open mind, or cultivating an open mind, might just be the best start for you. Meditate, open yourself to experiences outside of your normal realm of experiences, and you’ll answer these yourself.

Is it possible for u to ask him some questions from me?

As much as I would love to help, I really don’t feel okay doing that. For me to act as a middle man between you and Belial seems disrespectful to not only Belial, but also to your personal power. I won’t advise you to evoke or invoke any spirit, demon, or deity either… I suggest taking it one step at a time and getting to the point you want to be at yourself.

For me to act as a messenger for you denies you the opportunity to rise up and experience these things for yourself. I don’t want to influence or manipulate you to think or feel a certain way. Its up to you.

I don’t know who will. Don’t worry, you’re not bothering me. If someone will help you in this way that dwells on this forum, they will probably see this thread and message you. If not, its all up to you, and I know you have the power.

I think there is great energy in working against some impulses to work with spirits or other entities until one feels too drawn. There is this unavoidable point to it where things change, things fall into place and the synchronicity of a lot of things is very strong. That is of course just something I work with, only recently becoming more aware of it.

Those are beautiful pictures. Thank you for sharing something so private.

Exactly… I have been realizing the importance of patience and preparation heavily… Timing can sometimes be everything. In this particular experience for me, it definitely was. It feels like a new chapter has been opened in my life…

I feel a new motivation to do what needs to be done here in the physical world in order for me to reach my personal fulfillment and have started taking heavy action towards achieving my goals. I feel much stronger, more confident, happier, and with a take no shit sort of energy within me. I will be more specific in a more detailed update

Thank you for taking the time to reply @Mouchany

I see you like to make music, focused on vocal work? Do you have a link to share with me so I can hear your work? I love to make music too, and layering vocals and experimenting with effects and the voice is one of my favorite roads to go down musically.

Yes, I do. My music is under my own real name, and I prefer, at least for now, to have a different name in here, so I will not share a link here. Maybe in a pm if we get to know eachother more.