Connection Between Lucifer and Shiva

I’ve heard it said from different sources that Shiva is a mask of Lucifer. I believe this to be true from personal experience, but I’m also looking for other evidence for this connection. Any thoughts?

I think there’s already a post about that. Make sure to use the search function.

Edit: My mistake, there was a post about Shiva and King Paimon. False alarm XDD.

I read about a link between Shiva and Satan!

Well, I’ve seen many people saying that and it kinda feels correct. Kendal also agrees and since he has such a great connection with Lucifer, so I believe him.

I’ve personally never worked with Shiva, so I wouldn’t know.

I suggest that you ask a Hindu and let him explain

In my opinion, no connection. Maybe similar “energy” in their presence or something but nothing other than that.

Shiva is Shiva. Lucifer is Lucifer. That’s my thought

I’d agree with @PrinceX. They may have similar energy, but they are separate, different entities.

Shiva is a god while Lucifer is a demon, angel, and god.

Shiva and lucifer are no way same.

Other religion religions looks god as different from evil or satan. God is someone who is sitting at the top of the universe and looking at us with lens from the sky downward. God is fighting with Satan to bring goodness to world and for that he sacrificed his own son for the well-being of all humans on planet. And on the other hand this fallen angel is always fighting with god so he had to sent his son Jesus for our salvation of our own deception of eating APPLE.

Now Hindus is completely different, the Vedic sanatana ( eternal not Satan) dharma believes on the universal consciousness (bramha). And in Vedic religion even vedas doesn’t gives you 100 percent confidence of existence of personal god.

For Hindus,world is cyclic and good and bad are the same part of the wholeness. Just like a fish is not independent of water same way how can so called the entities inside the universe be independent of cosmic existence and consciousness.

According to vedas, that unmanifasted eternal being came to universe as the manifested rudra form and that rudra is only that exist and nothing beyond it. He was neither the male nor female there fore his first appearance was in ardhanarishwara ( half male half female).
Once the universe was created he came out from the forehead of bramhaa when the later was meditating. This adi rudra was revered by bramhaa as the absolute truth and adi purusha and was offered a prayer and mount kailasha as his abode.

Nothing happens beyond his will and nothing is beyond him. Gods or demons no one acts against his will and this Vedic purusha is the eternal light of all creation and destruction and liberation.

Note: above draft not written by me.
In short in Hinduism shiva is destroyer.He destroys the world when its no more live able not because he is devilish .
We destroy a laptop when its of no use , same way. We dont just break it in working condition.
We have no specific evil character. Evil is within us. Eg if we see a road accident we tend to look away or tend to look at it . If looking at it amuses us in any way then thats the evil within us.
We dont need devils and demons to punish us. Its our karmas of this life.

I heard from someone else that Lucifer is Enki, so you might be right

Welcome @Priyanka_Prasad. Please post an introduction in the NEW MAGICIAN AND INTRODUCTIONS area, and tell us about yourself and any experience in magick you may have. It is a rule of this forum.

He’s not Enki either, but people sure do love to play dress up with their favourite spirits.

It seems to be a monotheistic New Age thing to equate all spirits with whatever the spirit du jour is. I’ve seen people try to draw all sorts of lines between Lucifer and older gods from earlier civilisations. Theistic Satanists do the same thing with their version of Satan. Christians tried to equate pagan deities with their god too when they moved from killing non believers into converting them, and they built churches on pagan sacred sites as a way to turn the pagan deities into masks of Yahweh, and usurp their power.

Must be a religious thing

actually the person who told me said he had permormed an evocatuion and felt them to be similar, plus if you take into consideration that Lilith is from the mesopotamian pantheon originally, it would make a lot of sense, and I also believe it a bit based on my Anunnaki experiences and Lucifer experiences, but I could be wrong

My experience differs, which is why I generally laugh at the connections people try to draw between spirits. It’s as if the multiverse isn’t big enough to encompass all the pantheons of gods known to man, so they have to shoe horn their favourites into the clothes of others. Psychologically speaking, humans are very similar the world over, so it is logical that every culture would have its own wealth deities, and war deities, and love deities, and creator deities, etc, because they are all common human experiences. However, that doesn’t make them all the same.

But that’s me. I don’t buy into a lot of what people push in the occult because everybody says something different about the popular spirits like Lucifer, and I recognise the subjectivity of spiritual experiences.

so if I may ask, who is Lucifer to you? 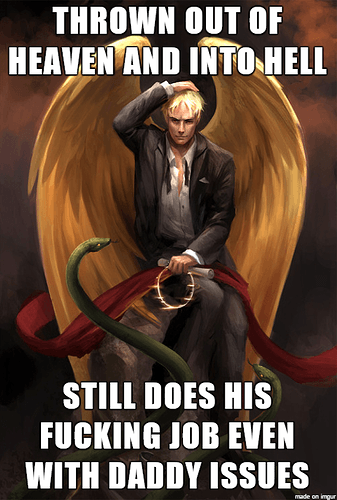 His aegis is as a bringer of enlightenment and knowledge. To me, he is his own being.

im going to be posting lucifer memes now, lol, and btw on that topic, magick through memes…interesting huh?

It’s just a new form of an old technique. In the pre-meme age, it was known as image magick.