Combat Spirits in the Physical

This is a thread about interacting with spirits when they occupy the same plane as we do. I’ve been off for a while, but I’m never not* practicing and learning. I know other forum members have had battles aplenty in the astral and whatnot, but this thread is mainly to discuss what happens when shit is going on right here right now, without time for meditation or the astral.

I’ve been wondering when someone would finally post about this, especially in regards to urgency and not having time to “do the work?”

I get mixed messages about this because some people insist you build a relationship with a spirit, when it seems people are likely to petition spirits during pressing times. How does that work?

especially in regards to urgency and not having time to “do the work?”

I think the path requires a form of daily practice rather than just contemplation but I understand where you are coming from. It seems until one is more developed energies and challenges can almost seem unavoidable.
This can be good but also can be a lot of one is going through multiple rebirths.

@anon59886753 building relationships with entities works, they’ll often aid in times of need, especially when youre new to the practice, or if youre in over your head. It is dependant upon the entity, and the situation in question. Sometimes, if you pick a battle, it’ll be yours. I think it has more to do with your current level of ability at the time.

My roommate practices like I do. With help from Archangel Michael, we exorcised an entity that’d been causing us trouble. The entity was left dead, or very close to it.

Because of events… (TL;DR Lucifer is very good at creating trials that are tests on multiple levels), the entity was back and naturally seeking vengeance. We found via some info gathering, it was raising energy and gathering as many lesser spirits as it could to help mess us up.

Didnt feel like waiting, so i chanted “ARKHYDUS-BIIITCH” Until we felt it coming. It accepted the challenge and had a bunch of lesser things in tow. It accepted the fight and didnt waste time.

The first thing I noticed was it felt like wind pushing all around my head. Crown chakra is normally where any attack is felt for me. Felt a little loss of energy but nothing unexpected. I didnt have time for invocation or anything extravagant, i simply said ‘fuck you’.

Closed my eyes, and felt the hostile intent that i had. In my mind, and occasionally out loud, I’d say ‘fuck you’, over and over. Focussed on feeling the hate(this was somewhat personal) and rage completely fill me, blocking me from attack, and then radiating it outwards.

Kinda like when youre mad and you want another person in the room to know youre mad without you saying anything. Radiate the aggression, and then focus it in on the entity’s location. I relied on instinct, and just shot wherever I thought it’d be, which was directly in front of me. When i knew it was hurt, i kept that same focussed hostility and upped the intensity. I was sweating and shaking, imagining the energy turning from fire to crushing pressure to just imagining myself swinging on the bastard.

I could have had better effect if I’d had focussed on one instead of continually switching, i was instead just keeping the aggression going. Eventually my roommate told me to stop, and just end it. I didnt know how to effectively ‘kill’ it, so i kept on for a while longer. It begged for aid from the lower spirits around the yard, but none came. It even begged to every higher being it could, but none came.

I asked one of my companion spirits to finish it, and she did.

So the focussed intent to harm, will harm if projected properly. I think i was too caught up on ‘fuck you’ instead of switching the main intent from harm to kill as i should have to finish the job. 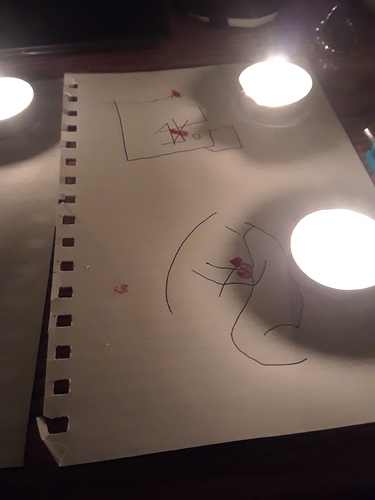 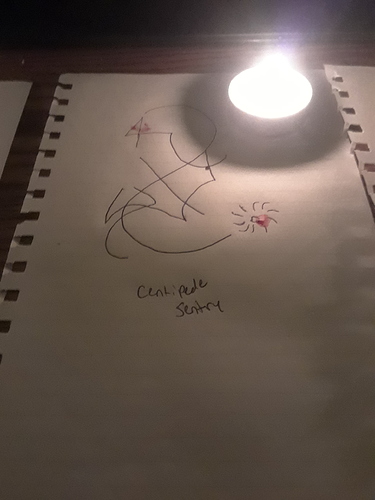 Above, are sigils. Credit for these goes to @Qayos. I have used these a couple times, with good effect. Now, you can astrally pull the weapons out, but as my astral skills arent too good at the moment, I’ve been using the sigils themselves in place of that.

Ive found that the saw is my preference, and it had been used to sever an unintentional channelling in another. That time, im unsure if it damaged the spirit or not. It has also damaged a greater spirit, enough to really piss it off, but the entity managed to engage and destroy the sigil of it. Things didnt progress from there, as we talked for a second and negotiated peace (i was kinda jumping the gun and attacking instead of seeing what was up)

if you are familiar with shapeshifting (in the astral) you might summon an animal spirit ally for example by imitating some of his behavior to do the task.
for example lets say you are fighting a spirit that manifests himself as a snake and you have an ally that can eat snakes let’s say an eagle. when you find something similar to a snake you can place it on the floor symbolically linking it with the spirit then copy the action of the eagles catching it and throwing it up from the heights as making your moves to imitate the moves of the eagle
in the physical plane…
this can help you get rid of that spirit or defeating him
sooner or later when this fight manifest on the other planes you have stated what it is going to happen

so in my experience, doing this exercise can make the battle in the astral plane foretold.

anyway this works with animal spirits as allies.

I find the implications of this very interesting. I hadnt thought to set up the events of an altercation before it happens.

Do you know of other ways in which one could “set the stage” for conflict?

there are many ways, depending on the context you can make symbolic links to your enemy and yourself as long as they are in the same symbolical system.
for example if you play the eagle to a snake spirit you are both in the same context, animal shape.
but it wont work with different elements not belonging to the same context.

lets say for some qualities your foe has shown you link him with the fire element, the right approach would be to link yourself with another elementary energy, as air can extinguish the fire but can also make it stronger its no use, you better play water element
so you light a fire and link him to the physical fire a declaration from you that the fire represents him might be enough now you link yourself to the water element declaring its representing you, you put down the fire with the water as you do this try to bring a strong empathy and sad (i’m so sorry) kind of emotion as it express the waters better than rage (fire) so you extinguish the fire feeling sorrow for the fire.
next time your fire foe tries to cause rage or make you burn you will be ready to express a “water” feeling towards him that will cool him down completely and leave him out of moves.

lets say your foe is the emperor card of the tarot play the tower (in a physical way that correspond the tarot system) do not tear the card as this would be outside the system rules but you could place a spread intentionally drawn to beat him lets say you cross the emperor with the tower card, tune yourself with the tower energy as you bring down the emperor’s structure, and leave the cards on that position so when you face your foe you evoke the open spread and bring chaos and crisis to his structure.

as long as you stay within the same system and its rules. and you evoke for yourself a energy that can beat his energy, you would have set the stage right