Can anyone read my recent works energy and wax please?

Just interested in others feelings about this and any vibes they get. I know we have some excellent people on here for reading energy from workings. 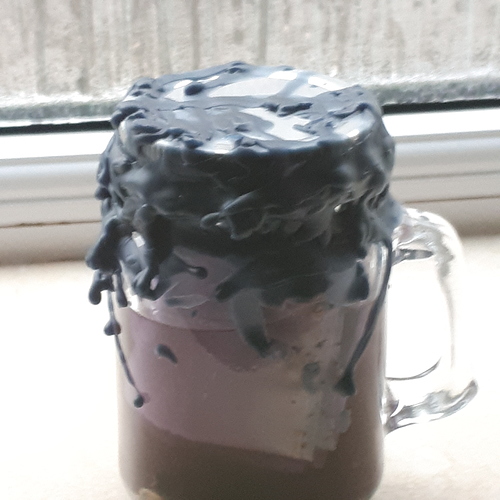 Hmmmm
I never done the wax thing before,
I have been getting really close to as of lately.
I tend to be pretty good at symbols, dream interpretations, been doing Tarot quite a bit and started tea leaf reading recently, I also think if I was there and could talk with you in private I could have a better sort of psychic reading into it, and this is the first post I have replied to so I am a bit nervous but here it goes.

As I understand it, wax readings usually are related to unconscious fears, so that being said
I am seeing possibly something to do with your abilities, as many of the symbols seem to relate, I am seeing a lot of hands and some noses, I am seeing sort of a mucus like substance coming out of the noses as well as a nipple on some breasts. Sort of like a fear of being able to control one’s own bodily fluids, or perhaps that specifically more likely is a general sense of one’s own ability to control oneself. Of course this is a pretty safe bet too sense we are all on a magick forum site, we all probably have a sense of wanting to add more control in our lives and much of that is self control, from either doing the ceremony or ritual in a flawless way and fears about how everything counts in large amounts sort of thing, or the fact we are all one and thus everything that is even out side of us, is a part of who we are and reflect in a way who we are; but I think that is still good for what this wax is about as this is what I am seeing.

If this was in person, I would want to ask about your thoughts on it, see what resonates and go deeper into what resonates, when I get a sense I’m on the right track I can get really in the zone.

It appears like if it is a trauma it could be dealing with some sort of abuse, but I think in spite your lack of being able to say in any way other than the slightest’s of telepathies online, which that maybe enough since I can be very good at that too, I see that is perhaps a bit less likely? I see lots of hands which can symbolize abilities and trust, but I also see two children and I am getting more of a sense of it being a male child, do you have a son I would ask? It appears to be a male, in both pictures a little more than female + it looks in the bottom left hand corner of the jar on top of the lid it looks to say “sun” or “sum” or “son.” so possibly beckoning me to shine a light on this issue? Possibly more than one? Possibly a son? Come to think of it, one of the noses also looks like this hot woman in a dress, it looks like she is having an orgasm but also giving birth… and she is lying back on a big arm that is holding a child in it’s hand that looks scared. Though the hand looks like a creepy claw of a hand it looks still less menacing than the other hands with the other child. In the other I see a child that his arms are being stretched out and his hands are being grabbed and he looks really scared, in one hand I see a hand grabbing the child’s hand but that hand is being grabbed by another hand that looks more like a claw, sort of crab like… is there a cancer in the picture? lol The other side it looks very strange like that’s where the breast mucus is. It looks like some one or something thing is grabbing on the other side but I can’t really see to well right now. But then above on the top of the jar I see a white hand that is reflecting light. Possibly more angelic, but still creepy to an extent. Possibly this is dealing with sorts of trust, where you perhaps with a partner have trust issues? Perhaps with your spirituality? Maybe you don’t even have children at all and you are thinking about it on some part of your consciousness and maybe you are wondering about bringing one into this world and seeing this as a sick world? Do I really want to bring children into this sick world of demonic invocation and baneful magick? Can I be good for them? Or perhaps what else could I do, forget about all this spirituality stuff and be a slave going with the shit flow of life and dealing with all those who have wronged me or left me feeling deeply empty and cheated? Perhaps should I seek another religious view that deals with angels of light? But is that really any better?" I mean the angel hand doesn’t look that much less creepy and above that is just a bunch of empty fields of light with a few dark streaks across it. Is that really better? Does any of that ring a bell?

And finally I see a woman, I think it’s a woman holding her hands together to make a heart symbol, the heart in the inside is one of the darkest parts of the picture, along with the fear inside the boy who appears to be having a nightmare and is being comforted by a claw and what ever is going on on the right side of the other boy. But this dark heart perhaps maybe dealing with a romantic issue? Maybe dealing with your belief in love, a wanting to be optimistic but seeing it dark inside? Then above that maybe there is an orb of light of hope and that is where you find your sun, sum son.

Thank you. I will ask her as I did the working for someone else who remains obviously confidential. Thanks for your detailed answer! I look forward to asking the person.

I never wax read and thought it would be interesting to see if / what others see.

I saw 2 demonic type faces in the wax, but I think human brains look for features in random things so I do not think too much into that.

Oh I see it was a client rather than someone on the forum.
That’s a good one, cause than my stuff on angels vs the baneful is likely off if she is not a member of this site.
I do find the professional psychics I talk to, will take information they know or that they think they know and then they think they have this really insightful understanding into my situation, sometimes I see them getting actual things from the ether and combining it with assumptions based on things they know or think they know.

I saw 2 demonic type faces in the wax, but I think human brains look for features in random things so I do not think too much into that.

I think that is sort of how it works. I think that doesn’t have to mean there isn’t anything magical involved or that it makes it less profound per say. But it is important to be on the right trail with that.

So for example in doing tarot reading I can pretty much just look at everything now with out looking at the book to interpret stuff, accept the pages still a lot of the time, grrrrr, anyways even still awkwardly it still does help, because than I can look at the list of words that it describes, see if something resonates with me as dealing with the situation, and of those words I would see if any of that resonated with the client from there I can sometimes know a bunch of stuff I don’t even know how I know it just about.

So now knowing the difference I look again, I see mainly the same stuff. But I see a bridge of hands coming together that is also like a cross roads and underneath is a lake shaped like a hand. Probably dealing with trust and decisions, looking for a great perfect all encompassing choice that is perfect and has perfect trust and assurance but will most likely have to go down the road and trust one of several people in her life. Also strangely what looked like two hands making a heart now look like to people trying to pull something towards them, something that is heavy. Perhaps the images that are double are related so maybe the heavy topic is one of intimacy and the woman giving birth and having an orgasm… related obviously but that is also looks like a nose with snot coming out of it may also suggest that she is conflicted between her desires to be a Mother and her disgust with it, which as far as an online reading, I am starting to gain confidence that is likely the case.

Oh I am also seeing… possibly multiple penis’s in it, which could I think in this case suggest she isn’t yet a mother, but is likely unconsciously thinking about who the best choice is to be a father. I’m starting to feel a little out is I’m just guessing land but the one that isn’t a cancer looks like the better choice in this particular case, that is to say how accurate I am. Maybe let me know how it goes I am curious as to how much I am right on.

I didn’t read the other replies because I didn’t want to be influenced. So here’s what struck me about your work and the wax forms…I gazed at it and several things came to me via my spirit friends.

Now I’ll go back and read the other responses.
Hope this helps

Make sure it is away from your or other’s property and stuff and yada yada.

Thank you very much. I did not see the birds until you said!

Do you think this will be a successful working by the energy? I feel it will but I trust your abilities. I will definetley bury it in the cemetery as you said and not look back. Thanks

I’m guessing it’s a dark work and meant to bind or inflict pain. I don’t usually look deep for actual images I just go with what appears in my mind - but I see many many parasitic type entities suffocating this individual and getting joy from it. Layer upon layer of misery with no escape.

Also - inner issues? Using their own weaknesses or vices against them until they kill themselves.

aha! so interesting–I didn’t write bury in the cemetery but was thinking it!

Thanks so much! I think so too and I know if you say so, It definitely is .

I plan on getting rid of it today, it is giving off some awful energy.

It’s powerful and I got that devious- shits about to go down- sorry not sorry grin when I looked at it. The person will feel like they’re trying to escape quicksand🖤 I love it!

Good. the person I did it for has cause to have this result. This has made me so happy. thanks.