Bune - was he trying to assist me?

About three weeks ago I went to contact Bune to assist me in a new endevour (help me get clients thru online means). The ritual was simple in fact, I used candles, Bune´s sigil and his/her enn (welc melan avage bune tasa). Then I said specifically what was my business and the assistence I needed.

During the week I waited for calls from clients and they never arrived. So I assumed that my ritual/petition was a failure at all!

On sunday afternoon while I was visiting a causin I received an unexpected call from someone saying he got my number from a friend a long a go, and he was contacting me just to confirm if the number was still active that he is interested in my works (now this one is a different business that I advertised one year ago, I even forgot about that)…

Notes:
I was wondering whether that (the call I received) was a coincindence or not and if not, why would Bune try to do a different thing from that I asked.

After few days I went to check the steps I was taking to advertise my new business and I realised that it was ineffective advertisement.

I am pretty much sure Bune tried to help and he gave signal that he can help but I need to do well ¨the heavy task¨, if I do a good advertisement work then he can draw potential clients to me.

So I want to thank Bune for his interest on trying to help and publicly praise his name. And for a better work together I will try to cantact in a much interactive manner (dialog/conersation).

Spirits will manifest things in whatever way they see best fit for the long term usually. Rarely do we get exactly what we want exactly how we asked them for it. I asked Bune for assistance with a job and it came in a completely unexpected way as well, but it ended up being better for me.

would you mind to share your experience with more details (you can censor very specific informations just incase) ?

Now I want to add something that happened that same week on a friday morning… by this I don´t want to look fanatic in thinking that everything that happens has somthing to do with Bune et al. The following is just an interesting add up:

I was returning to home from a different place of that I usually stay. I had to help the girl with money for her breakfast, now I was running out of cash to commute. I was still with enough to make 2 rides(I needed 4 to get home). After two rides I went to an ATM to withdraw money for the next 2 rides and I could only get big bills from the ATM what would make my relationship with the cab driver complicated, since it was early morning and he wouldn´t have enough for the exchange.

I entered to a supermarket to buy something to have small bills. I bought a case of eggs but again in the exchange woundn´t have enough coins to make it easy to pay for the ride. Inside of me wished I could have enough coins to pay for the ride, so that I won´t have need to mix those bill (when you withdraw big bills it is easy to spend money without good management).

For ease understanding I paid 50dollar to be discounted 7.8dollars. my change had to be 42.2dollars. For my surprise she returned me 44.2dollars. It was early morning and there were just few people in the queue behind me (she wasn´t rushing) I saw her adding these 2 aditional dollar. My ride would have costed me 3dollar(44.2 - 3 = 41.2) that was even more than what I wanted.

Obviouslly I felt bad and returned to her the exceeding money. And she said: ow I apologize!.… instead of thank you! (in her place I would have said that).

The name Bune crossed my mind when I returned that excédant and felt silly for wishing something and next deny the miracle.

Note: as I stated in the begining it doesn´t necessarilly has to do with Bune, Idk… I just felt like to add it.

I feel like to post it here too, I have done it in the topic about MEMBER´S SUCCESS (hope this doesn´t qualify as spam).

I summoned Bune on tuesday to attempt to talk to him, no success in this aspect but I asked for a sign of his presence and it came in a very clear way:

I want to thank Duke Bune for honoring me with his presence, although I couldn´t hear, see or sense any temperature in the room he cleared any doubt about his presence flickering the flame of the candle (when I asked to) in a way that it couldn´t be missed by my senses and in a very peacefull maner.

I was amazed since I was very close to the candle and imagining that he is the one phenomenizing that flame was great!

Thank you Bune, for your presence and patience… it is very push forward to notice that!

Bune is great and so helpful.
Do not stop the contact.

I just finished another contact in which I mainly thanked her.

Hey here I am to share my experience one more time with Bune the duchess.

After one month and many days the results of my petition came. At first I was not associating it with Bune’s intervention… why?

Because it took too long to manifest according to my expectations. Bune has showed me that he could work if I changed my petition:

(now this one is a different business that I advertised one year ago, I even forgot about that)…

and in my petition I had not set a time interval in which things should start happening. When I didn’t see results I even thought my offer was not accepted and so he wasn’t working though.

And when this opportunity came, I was in doubt wether that´s Bune or just an opportunity as such. Days after the person who contacted me for the work, handed me an un-necessary document to complement the guidelines of what I should do. I just throw it in there and kept doing my work. One day I felt bored and decided to read this same document and to my surprise… guess what??

In the first page the was a person’s name Ms. aaaa bbbb cccc Buna (the owner of the land)… it got me amazed! and I got nothing more to thing of … it is Bune saying it’s me! 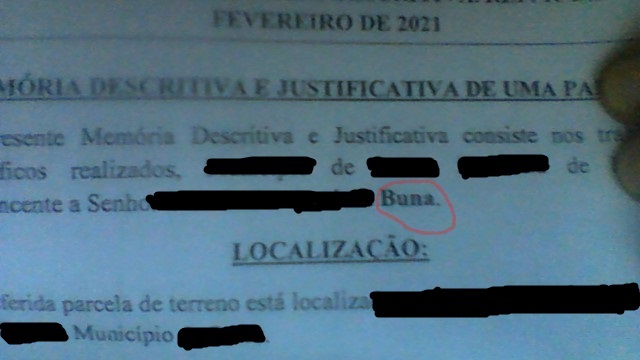 Thank you Bune, I’ll invite you for the offerings…