Okay so I recently started working with Belial and everything has been going well. A day or two ago he told me he would prepare me for anything, which was a very generic statement until I found out what he meant.

He told me to envoke him tonight and he would help me with divination, and I did. I did everything right, and all I got was momentary flashes of him until I heard “End the ritual.” For a split second before that I thought he was there, but the energy was very different, weak, nothing like Belial. It hit me that something else was there which didn’t make since because I knew Belial was watching me.

I blew out the candles, and cleansed everything, I started to panic because I already doubt everything enough as it is. Then it hit me, that thing was waaayyyy to weak to overpower him, the way Belial was acting was, well, acting. Over dramatic, like when I would tell my siblings they were adopted.

The second I cleansed everything I felt his energy again and he admitted that it was a test, a preparation featuring what is now my least favorite of all his familiars. Now I have a few questions. 1. has anyone else had an experience like this, 2. Do you have any advice on how to get over this, 3. WHY???

With Belial, be specific and if something makes you uncomfortable, let him know. He WILL push you, but he’s also very fair and respects setting boundaries for yourself. When I was first flirting with the idea of calling him up, he threw my ass in an astral arena with some weird gorilla/elephant monster. Definitely one of my favorite spirits in general. Always has my back, even when I don’t ask or think he’s watching.

The second I cleansed everything I felt his energy again and he admitted that it was a test, a preparation featuring what is now my least favorite of all his familiars.

Hey man, the familiar’s just doing what he’s told, no need to hate on him.

Yep, but not with someone posing as him. One time, I had a huge cold and asked Archangel Raphael to help me out because it was getting in the way of my job. I sensed that it was working one moment, and then it stopped. And then it was working, and then it wasn’t. Later on, I learned that it was because Belial stepped in and convinced Raphael to heal me in slow spurts to teach me a lesson in patience and how getting what you want can involve a lot of struggle.

My best advice would be not to take it personally. It’s not meant to insult or embarrass you. Belial felt you needed to learn how to properly identify spirits, and this was how he wanted to teach you.

Because that’s his teaching style. He’s the kind of person who will teach someone how to swim by throwing them in the pool and letting them almost drown.

However, he’ll only pull that shit if he thinks you’re ready. Belial wouldn’t throw a challenge at someone if he didn’t think they could handle it.

Welcome to the “Working with Belial Club”.

Thanks for all this. I have begun contacting Belial since Dec/Jan. At first he spoke “I KNOW” Later nonsensical (to me) sounds. He’s shown his image as being black dragon / strong white/tan man draconian face. It was awsome. His energy seems good like I always want him around. There are times he just won’t speak. But i learn to get rid of religious based fear I think it insults them but I believe that this is forgiven when you realise and make redress like offering it as a sacrifice and learning. I found was directed to u tubers who answered and alleviated confusion. Another thing I noticed a spirit came to my bedroom -after ritual( night), and came and just sat down next to myou pillow as I went to sleep. It was astral black. I felt peace & comfort. Could have been Belial. I not really “dismiss” but just say “thank you but I’m going to sleep now see you again…” ring my singing bowl.

I think what Belial is teaching you is a wonderful skill. it’s super important to differentiate the energies of different spirits so you know who you’re talking to. It was a test and you passed. Excellent job

I tried evoking King Belial for the first time two nights ago and last night I woke up in the middle of the night because I felt a spirit in my bedroom (where I tried/ succeeded? in evoking him). I was not as brave as you hahaha I didn’t talk to it, I simply didn’t open my eyes and went to sleep lol I don’t think it was King Belial though. I just quickly prayed to him and asked him to take care of me if anything went down lol

I asked for his help in reguards to building lust this girl had for me to another level.

Next day I had to revelation to moving out where I was at and have been exercising and watching what I’m eating on another level. I offered a beer and said when task was done I’d offer blood.

Yeah let’s say this, your life WILL change. He’s the badass as a young magician I was afraid to call, now that I have, I don’t fear any spirit anymore.

He did the same with me, after my first evocation did the whole dream / Astral strange thing for 4 days.

I am not an expert on King Belial by any means,but I can say he does like to test your will and courage and strength.

Not in a dangerous way, but for me in an almost playful and odd way.

He respects you if you stand your ground. I have had him show up in the strangest of ways and I love that quirkiness. He showed up as a Woman I really hated from years ago in a ridiculous wig once.

I’ve had a dream where he tested me.
In my dream it was dark, like pitch black darkness. I heard this deep, dark, sinister demonic growl. Then I saw this demon, his face looked like a goat skulls with large horns. His body was a black/red color.
I was scared frozen in fear.
He then told me his name was “Belial and he was only here because he was going to take me home, but because I was scared I was not ready. And that I had to wait.”
I begged him to not leave and that I am ready. But he kept insisting I’m not.

This was him, but in a red/black color. 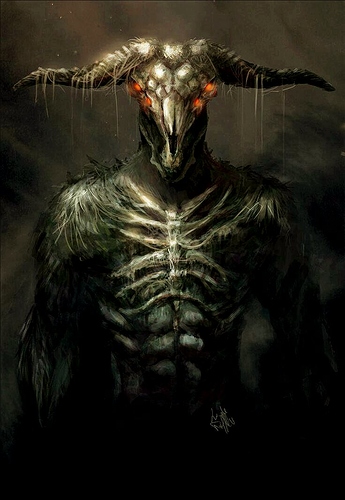 Be careful , it is not always easy to decipher the identity of what you summon , it will take a while of practice .