The last time I had an experience of communicating in the astral with a demon with whom I most often work. Communication took place in a mental way. But this time there was someone else besides us. It is difficult to say whether it was a woman or a man, the voice was impersonal. I asked him to show himself and he asked me if I could stand his image and not be afraid. Haha this is the first time I’ve been asked about it… They usually show up right away and that surprised me. I said I could handle it. At that moment, darkness fell. There were a lot of eyes looking at me. At first I was scared because of the sudden change in the visual space, because I thought that he would just appear in my room, but no. After I coped with this, I tried to focus on his image, but I couldn’t do it for a long time. Perhaps there was not enough energy or experience at that time. After the vision, I went back to talking to the demon and the second being. And so. I have no idea who it was… I read that Eyes are illusions, as they are ethereal presences. And the eyes didn’t glow, I think that’s the important part. My suspicions fall on Azrael, since I have not found any information about which creatures can have images with many eyes…I’ll show you a picture of something like what it looked like 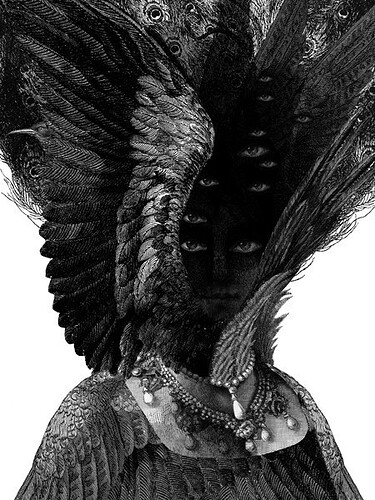