For starters, I’m under orders to start this, I’ve recently put some major pieces of the puzzle together. I’m still fairly new to the LHP, never accomplished shit with the RHP, and Christianity left me feeling empty (never knew the extent until I found MY path). There are no real words to describe what I believe succinctly, frankly, it’s not even meant to be expressed verbally, but I’ll give it a shot.

There has only ever been one God (for lack of a better term), and all Gods are One, the differences are based in how our individual minds interpret the information. That’s not to say any other Gods don’t exist, but on some higher level, they’re all one in the same, perhaps fragments, or aspects, split off to keep from throwing off some sort of greater balance, the words used here are more or less irrelevant, so long as you understand the concept.

Thus, Abrahamic faiths are just as valid, only THEY’RE the ACTUAL “devil worshippers”. They obviously represent the aspects of “God” that would see us destroy ourselves for no purpose other than it’s amusement, and while I believe duality is a lie, polarity most certainly exists, and the Abrahamic religions are the negative polarity, for obvious reasons. Through the works of these religions: Christianity, Judaism, and Islam (to name the main ones), any method humans may have to “look God in the eye”, so to speak, is (ideally) punishable by death. Literally, making every other deity, and entity out to be demons. Thankfully, science is on our side (by which I mean, science doesn’t make assumptions, is not subject to deception, and is only interested in what it can prove), and the law now only recognizes what is scientifically quantifiable. So no more witch hunts (at least not government sanctioned).

This is more than what I believe, this is what I have learned to be true. The spiritual reality is FAR greater than any of US could possibly imagine, as great as these beings are to us, there are beings as great to many of them. Hell, the pattern might well be ACTUALLY infinite. I haven’t found the end to it, shit, I can’t even perceive the whole thing with any form of perception available, and I can come DAMN close to VISUALIZING infinity, unfortunately it’s kinda unpleasant when you fail, I lost a bit of time, and woke up drooling on myself, pot helped. Pot always helps. So does acid. On second thought, that was actually a pretty fun day. XD

Please note: this is somewhat involuntary on my part, I write as the info flows.

The greatest trick “The devil” ever pulled was NOT convincing man he didn’t exist, it was convincing man HE was God. Society is experiencing the consequences there of. Now when I say “devil” I don’t mean Lucifer, Mephistopheles, Beelzebub, Belial, or anything else that has been referred to as “Satan”. I mean the divine aspects of entropy, stagnation, and decay, THAT is what Jehovah represents. It wanted power, and it’s plan worked. Now we have to step up, and the aspect of the divine within ourselves is telling us our existence, is unsustainable. Many people that call themselves Christian are aware of this as well, and in truth, have faith in (what I refer to as) “The Point of Unity” otherwise known as God, the REAL one. They may not believe in the divine aspect of The Self, but they know social indoctrination when they see it. It’s the weak and the stupid that are the problem. Ever notice how society kinda seemed to set itself up to protect those that refuse to protect themselves? There’s a reason for that.

None of us considered the weak and stupid to ever have been a threat in the past, not until (relatively) modern times has it been a problem, starting roughly round about the introduction of Christianity, hmm, seeing patterns of three here, three faiths designed for control over the weak and stupid, all preaching go forth and multiply, with reckless abandon, and at perpetual war with each other… do YOU see what I see?
…and no, that isn’t an Illuminati reference, if THEY exist, they’re a fucking failure of a secret. XD
However, there does seem to be some sort of conspiracy here, but like any good conspiracy, we only have small pieces of the REAL picture, The Illuminati may be a sect of this, but I’d wager they’re more of a distraction.

Holy FUCKING shit, so found Belial, or he found me. THAT was intense, Like getting powered by an atomic energy plant directly to your spine. SO fucking cool, almost like peaking on acid for a couple seconds. Anyone else feel like that, after their first experience with Belial?

It was a good night tonight, made more money in a 6 hour shift, than I would in an 8 hour shift at $10/hr.
Hail Lord Belial, hail Big Chief Marbas, and praise The Darkness, and The Mists.

This sigil has helped me immensely with immediate financial gain, the catch, you have to NEED the money. 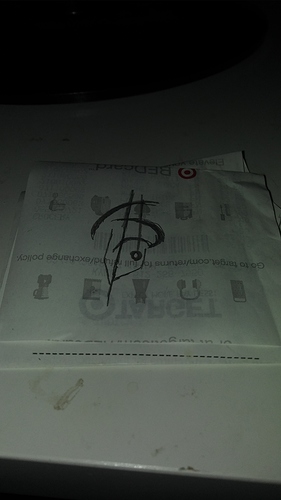 So, just kinda doing what I do either pondering the multitude of possibilities, or reading into an alternate Universe, but for the sake of amusement, let’s say, the bible isn’t wrong, in that, if not accepted by Jehovah (or whatever), you stay in purgatory until being sent to hell, which isn’t gonna happen until the second coming. Well, fine, fuck it, make our own kingdom in purgatory, make it greater than this, so called, “paradise”, of bowing and scraping for some semblance of “salvation”. Doing so will probably be taken as an act of war, I think we can win that war.

Look, all that social indoctrination we’ve been subjected to since we were kids, religious, and otherwise, is to convince us that we have no power, we’re no more flawed than anything else that exists, we act upon our nature. You seek to enslave ME? I will GRIND your soul to nothing. Make your own body good for nothing more than an immovable meat sack to contain the tattered remains. Why kill, there are SO many worse things. Hell, my favorite curses are; mundanity, boredom, clumsiness, anxiety, and general bad luck, see, enough to drive someone in-fucking-sane, but not enough that anyone will show them any sympathy, and no it’s not something I throw around lightly. I have a word to spread, and that word is: madness.

So, I’m kinda guessing if Belial AND Marbas are telling you to calm down, it’s really time to chill. I’m just out of patients with the cattle. Belligerently droning on, as if with some MAJOR purpose, ultimately accomplishing nothing, like watching 10,000 monkeys all trying to fuck the same football.

Sometimes I HATE being human. Not necessarily ME, anymore, just, being human, knowing those shit bags are of the same species. just kinda pisses me off. How they just squander their sentience.

Well, you know what they say: “don’t weep for the stupid, or you’ll be crying all day.” Guess that also applies to being pissed.

I have work to do, something to kill, taking a break from everything else.

So, it occurs to me, I’ve been in pretty much constant intermittent contact with both Marbas, and Belial for about 3 weeks straight now. Frankly, aside from hearing one or the other chime in from time to time, I’ve felt no change at all, except for the better. My sleeping cycle is stable, I’m eating regularly, and reasonably healthy, and hell I feel fucking great. Hell, tonight Arachne decided to reveal herself to me, was not expecting such an immediately sexual response…
She gave me a few ideas, gonna need to look more into elemental magik, gonna look into each, but got a feeling Air just ain’t my element, Capricorn. Hmmm.
come to think of it, may wanna look into Amon Ra, as well…