Archangel Michael the Angel of the Sun

For about a month now, I’ve been feeling called to explore more work with angels and demons. I like more folk magick in what I do now, so naturally combining some of what I’ve learned in conjure with what I’ve learned from some of the grimoires is my preferred method. The Angels that I’ve been feeling particularly called to are Saint Raphael and Saint Michael. I’ve already been doing some healing work on myself through Saint Raphael and I do see some great improvements in my outlook and emotional regulation. And of course in my overall health. But as of last night, I’ve been working with Saint Michael and I’ve got to say, I’m more than impressed.

I evoked Saint Michael using his sigil, some sunflowers and incense as an offering, a seven day Saint Michael candle anointed with blessed olive oil, and by preliminary prayers to Saint Cyprian to help mediate the energies of Michael with my spiritual workspace. I called on Saint Cyprian first because I’ve been working with King Bael, King Belial, and King Paimon on some other things and didn’t want any energetic conflict with San Miguel.

The energy of Saint Michael is very martial but also very compassionate. He feels almost like a stern older brother who wants the best for you. I spoke very briefly with him and he told me flat out what I’ve been doing to self sabotage and be selfish. I was almost shocked by how quickly he arrived. After saying some prayers and speaking to him, I presented my petition and prayed that he bless an amulet that I’m dedicating to him. I prayed that he help me grow more confident, assertive, and courageous while also defending me from negative energies and hidden enemies.

Today started off a little rocky. I just switched from night shift to morning shift and my sleep schedule has been wacky to say the very least. I’ve also been realizing how much fear, anxiety, and depression have been ruling my outlook. But as the day progressed, I found myself feeling more and more confident. I no longer felt the need to allow others to come before myself. It felt much, much easier establishing boundaries during a situation where they needed to be established. I also felt much more at peace within myself and much more confident in my interactions with coworkers and supervisors. The difference was really significant. I plan on working with him for the rest of the week to try to bring these plans into effect in a more concrete way. I’m loving my work with the archangels so far! 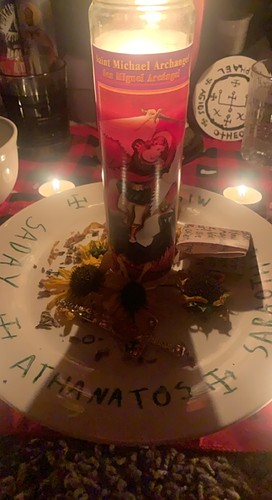 Michael is very direct, he has roasted me countless times

Edit: You mentioned Raphael, I need help with something regarding him. Can I pm you?

In my opinion he’s a bit of a zealot but then again I suppose that’s his job.

lol
that’s like saying Russian president could be a bit more flamboyant
Ive not had the pleasure of direct contact as yet, although felt presence and corner eye visions are clear.

Basically i know he knows im a bit of a flannel and i doubt i could take real criticisms - id need a softer approach or just let him ge ton with being strong and the head of so many, and im the army of none

Nicely done. Keep on it.

I might have to copy cat your ritual and see its effect in my life.