Any Tool fans notice this?

So check this out, new anniversary artwork for Opiate. Noticed something a little obscure to your typical person. 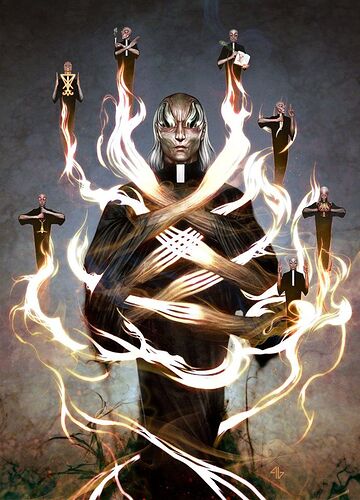 Definitely Lucifer’s sigil, funny because I have not seen anyone talk about it nor acknowledge it. I can’t be the only Tool fan

He also appears to be drawing the sigil with a peacock feather quill, which I’ve seen popping up lately a lot in reference to Lucifer, but that’s UPG.

Oldmate in the last photo also appears to be holding The Hanged Man, if I’m not mistaken, and another of the figures appears to be holding a chalice or cauldron. I thought the figure above the chalice was holding an athame and doing the wizard’s sign thing with the fingers of Saturn and Jupiter, but when I zoom way the hell in it looks like he’s holding… an ermine/ferret?

Aight I gotta go listen to this album now

Would not surprise me though if TOOL were heavily influenced by the occult. I’ve seen people discussing that in general before; don’t remember if it was here or on reddit though.

They are most definitely inspired by the occult, I just have never seen direct references. Usually indirect lyrics but nevertheless very interesting!