Another Faustian Spirit to be introduced: Dirachiel

Dr. Johannes Faust (author Johann Scheible) wrote not much about the Earl Dirachiel in
“Magia naturalis et innaturalis”
(or ‘‘der dreifache Höllenzwang’’) but that he
gives things from nature for invisibility.
He gives the “Farren grain”, the “Springwurzel”
(“jump root”) and ‘‘black bean grains’’ for invisibility.

Dr. Faust means, Dirachiel has to be called
on crossroads at the evening before the first
of May or the evening after the first of May
from 11 o’clock in the night to 1:00 o’clock
in the morning. I don’t think it’s necessary
and propably he teaches, too, instead of
only giving grains and roots to hide yourself magickally.

Further it is described that he is a plutonic spirit,
part of the hellish army and is antipathetical
to humans. So it seems he is easily aggressive
or insidious to sorcerers and other humans.
He likes to demand Pacts.
You should not be responsive to
this but evoke him to get over him.

I had contact with him while I was in
hospital. He was there when I suddenly
awoke in the middle of the night.
We talked little & he brought spiders with him.
He seemed to be working on me, doing sth.
I called an Angel to observe the situation.
There was something like an astral mirror
visible next to Dirachiel. I don’t know what it was.
Something like a black, thorny frame of a mirror.

I wish you success if you want to call him.
Always be vigilant with him.
The book gives no personal sigil of him unfortunately. His name should be enough.
From whom the sigil is in the portrait
of Earl Dirachiel is unknown, maybe it’s his
after all. 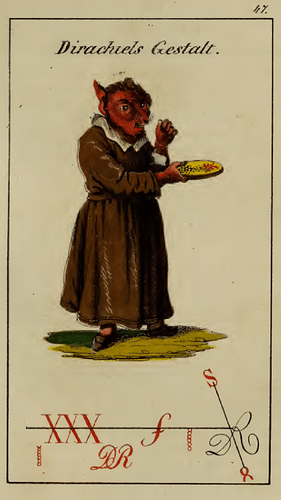 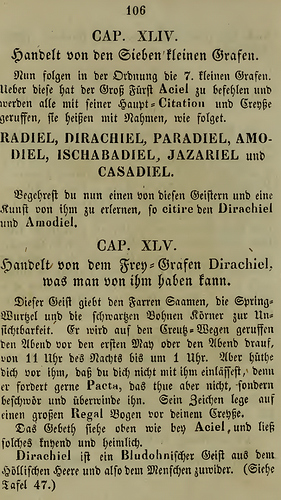 Do you mean the sigil under
Dirachiel’s portrait can be his own sigil?

On this page is written, entity names on -el stand for having been or being angelic. So the page means the most faustian spirits are fallen angels which became demons.

I’m now sure the sign under his portrait is his sigil. It was written in the book. I just didn’t see it because I didn’t interest for the christian Conjurations.