A spirit to help you with learning Alchemy

While I was heavily into spirit creation I made a servitor by the name of Sin. He was to be a simple messenger bird to perform basic tasks for me both in the mundane and spiritual world.

Later on as I began to explore alchemy and the art of transmuting energy I decided to work on a technique I learnt from Lilith and Arachne.

This was basically to give an energetic upgrade to an existing basic energy form. It involved a lot of visualization and energy manipulation but I managed to get it done.

I created a vessel for my little servitor and housed it’s energies there while I called on various currents to to bless it with their energetic signatures and power.

This is the result: 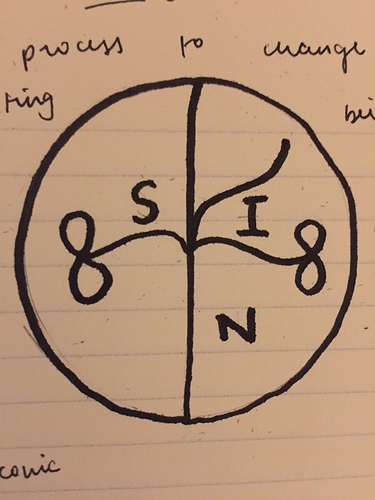 I advanced his energetic matrix and gave him more power.

I use the pronoun he as a descriptive pronoun because i’m reality all spirits have no gender, some just associate themselves more with either masculine or feminine currents.

I’ll leave you to figure out how he appears to you. He can teach you inner alchemy and how to shapeshift among other things.

So I want you guys to try to summon him and learn from him as he’s been out and about collecting knowledge.

All you really have to do to summon him is scry into his sigil and call his name: Sin, three times and he’ll appear.

@Aluriel Awesome! I have been working with Alchemy for over 20 years now. My first servitor is called Fetch. He was created to help me deal with a gossip issue. He would go to the people gossiping and then return to me with what they were talking about. Drove them nuts when I already knew what thy were planning.

He has been upgraded in that area, for now when he does Fetch information, I can hear it auditory, get visual pictures, smells, etc. He is also my first line of defense. He sets up my wards on the physical as well as my Astral Temple. Good Luck in your endeavors.