A powerful symbol i got from azazel 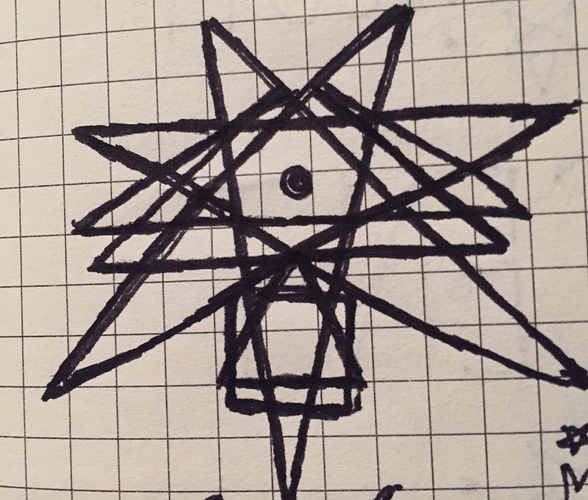 This symbol I was given by Azazel where this is the seal of the fallen in which this extremely powerful symbol was to be used in a ritual to become a member of the fallen unleashing my spiritual wings, which I saw as two red minor chakras at the shoulder blades.

I was told that Lucifer, melek’taus, samael and azazel will be called at the temple while performing the ritual.

Anyway I just love this symbol when I asked azazel it’s name he gave me a demonic word which is Veng’gasak.

Let me know what you guys think

First word came to my mind was atom.

… unleashing my spiritual wings, which I saw as two red minor chakras at the shoulder blades.

That’s a beautiful symbol, buzzing with black electrical power, and fwiw I’ve had similar experiences with spiritual wings, and two new energy centres forming that are their point of origin.

Exactly the feeling is sublime and quite profound

me too…i actually felt wings sprout out and saw them take form. now i try to keep up those points the same as the main chakras.

I know this is really old but I was wondering what would happen if someone got a tattoo of that?

Oh my fuck lmao this was such a long time ago but it could not have been bumped at a better time. This looks EXACTLY like a sort of mathematical symbol that Belial and Azazel have been showing me. It’s like it’s the other half of it actually. I didn’t know the significance till now. Thanks @C.Kendall and @TheMagi

Their wings and the horns yes just knowing

Yeah, Azazel has a habit of giving out seals to those he chooses.