A meditation with King Paimon

So I have been working with King Paimon to gain emotional understanding, both of myself and others. I was meditating yesterday after a particularly nasty mood swing triggered by frustration with my own inability to do just that; understand people, their motivations, why they do what they do and why they think what they think. After a few moments I got the song “Heard it Through the Grapevine” by CCR shoved into my head and I could not dismiss it despite my best efforts.

So I decided to meditate on the song. Then I did the only thing I know to get a stuck song out of my head. I listened to it.
“Believe half of what you see, and none of what you hear.”

Damn. That’s some powerful stuff. Then the message He was trying to (has BEEN trying to) convey became clear. One of the greatest keys to understanding is observation; it is superior to listening.

As children many of our elders would tell us “we have two ears and one mouth, so you should listen twice as much as you speak”. Why? People lie, they can spout incorrect information; worst of all they can speak what they feel is the truth without understanding exactly what it is they are saying.

I have yet to hear a parent tell a child “you have two eyes and one mouth so you can observe twice as much as you speak”. But this is so, so true.

Politicians lie all the time, and many of their constituents listen with their two ears very closely. But politicians seldom speak anything worth hearing. This in turn leads your average voter to make piss poor decisions because they are taught to listen. If you want to have a grasp of truth then you need to watch and see what that same person does with his or her actions.

Abraham Lincoln will back me up on this. While not a direct quote, he once said something to the effect of “the true test of any person is to give them power and see what they do with it”, see being the operative word. See. See?

If you want to know what emotional state a person is in, to understand their motivations, or test the weight or truth of their words, your best recourse is to SEE how they live, how they act, and above all LOOK at how their actions have effected their lives and the lives of those around them.

When you want to really know if someone is lying your best bet is to WATCH their body language, mannerisms and eye movement.

Now comes the tricky part. “Believe half of what you see.”

Take the following example for study. A man walks up to you and asks for change, saying he needs gas because his wallet was stolen. This person has sunken eyes, a gaunt countenance, palor. Now, I am a New Yorker, and every red flag would tell me that this is a scall trying to get one on you so they can buy whatever drug makes their shyte existence bearable. But only believe half of what you see. What do the man’s clothes look like (especially his shoes)? Is he clean shaven with clean, well groomed hair? Does he have all his teeth? Where are you, in front of a package store or across from a gas station? Where is his car, and if it is there, what kind of car is it? Is he alone or with a family? Does the family look healthy and happy?

Using your eyes, you can now tell if the guy is lying and looking for a fix, or if it is a guy who got screwed and the sickly appearance is because of a disease. Never trust your ears alone. Your ears are little more than a warning for impending danger or a diagnostic tool so that you then know to make use of your eyes.

I’ve been taking this Hypnosis/NLP (Neuro-Linguistic Programming) course. And you, @Woodsman81 just basically summed it up. I am no doubt a big fan of King Paimon myself as you can see in my other previous threads. In NLP, they teach that the eyes giveaway what and how a person is thinking. If a person’s eyes are looking to their left, they are being honest. If their eyes are looking to their right, they are lying. The left side of our brain is analytical and the right side is creative.

Also, what the singer, Megan Trainor said, “I know you’re lyin’ cause your lips are movin’”. 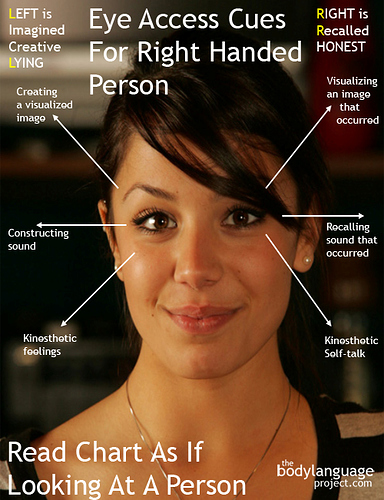 Nice!! NLP is extremely interesting to me. I am especially intrigued with sentence structure and implanting ideas verbally. If the course works out well for you please let me know what it is; I am learning it bit by bit solo, but some formal instruction from an experienced user would likely help take it to the next level.

There are many websites about NLP. Here are a couple to start you off:

Chaos magick is based on NLP and Hypnosis. Oh, and politicians receive this same training so they can create rapport to relate to their constituents. If you can’t get along with the people you expect to vote for you and keep you in office, you aren’t going to do too well!

Another resource and Free NLP Course by email:

Articles, videos, programs to build skill in hypnosis and NLP