A Lucid Dream UPG of Sitri, Fro'ghla'tasch, Nitika, and Salas'ash

Did you know that Fro’ghla’tasch likes fish and chips? She likes any kind of fast food.

That was one of the revelations that I found out in a lucid dream that I had. Note that what I experienced is my UPG (Unverified Personal Gnosis) only. What you get from this is up to you.

I was in a nightclub/restaurant. We were all sitting around a VIP section white bar table like the photo below: 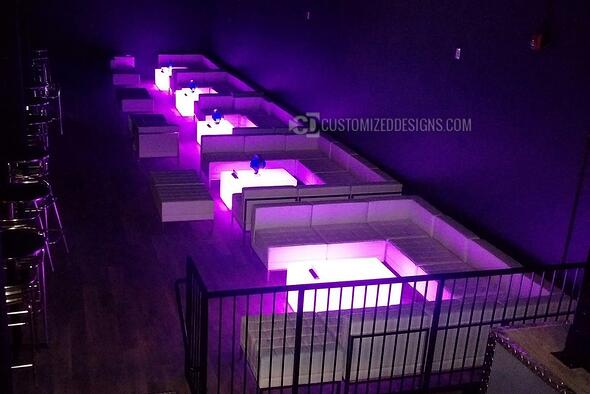 When I realized that I was in a dream, I called out to Nitika and Salas’ash. As some of you may know, Nitika is the Genius of wealth from Damon Brand’s Magical Cashbook. Salas’ash of the House of Anatel is one of Azazel’s warlords mentioned in the Book of Azazel.

Sitri of the Goetia also showed up. In the dream, I also complained about Fro’ghla’tasch of the House of Retztael who is one of Azazel’s priests/sorcerers mentioned in the Book of Azazel. All of them, except for Fro’ghla’tasch showed up appearing as young Black (Afro-American) men with dreadlocks and braids.

Sitri prefers his name to be pronounced as SIR-TREE instead of SEE-TREE. He got irritated at people saying his name wrong. I was complaining to him about how along with him, Gremory and Zepar seem to not respond to me when I call them. And, that they don’t do anything for me. Then I mentioned how Fro’ghla’tasch don’t do anything either.

Instead of showing up, Fro’ghla’tasch sent me a package. It was a long blue box filled with folded papers that when opened contained illustrations of hot dogs, hamburgers, pizza, and French fries. I opened another folded paper with more illustrations on the table and a plate of fish and chips popped up! I started eating fries and fried fish. So, I’m thinking that Fro’ghla’tasch wants an offering of fish and chips. Okay.

When Salas’ash came, he hugged me and gave me a fist bump. It felt like we were good friends. I thanked him for helping me out so many times. He smiled and was like, “No problem, man. It’s what I do. Anytime.” He admits that he likes aliens, especially in sci-fi like Star Trek: Deep Space Nine and Star Wars. He says, “Anything with aliens in it. I love alien shit.”

Nitika likes “shiny paper and stickers”. I recall the same from the Order of Dark Arts website that mentions he is known to enjoy holographic stickers, metallic paper, lollipops, and stuffed animals. I asked him, which sigil do you like, “The demon sigil of the book sigil?” He said that he, “prefers the demonic sigil (on the website) but he will still answer to the book sigil.”

It was an interesting and fun dream. Again, it is up to you, the reader what you take from this. Please feel free to confirm or comment.