A Journal on Summoning The Doom Slayer

I’ll be invoking, and probably also evoking, The character of “The Doom Slayer” from the game DOOM (2016)
It’s almost like he’s being beckoned to be summoned.
He has a sigil. 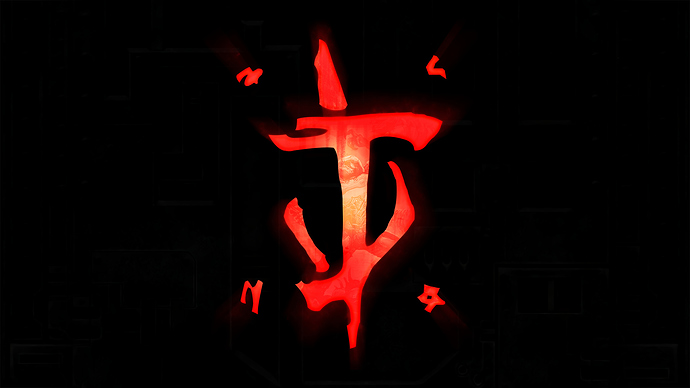 and he is most likely based in rage magick, or straight up baneful magick.
I’ll be placing my full metal Airsoft 1911 on the altar to aid in the summoning. Since hes all about guns and violence I’d say it’ll do for the purpose of my workings.
I’ll be summoning him to take care of some baneful workings I’ve been trying to perfect for ages now.

Here’s my one concern…
His whole thing is that he kills and hates demons. Like that’s his thing. I’m primarily a demonic practitioner. I’ll probably reek of demon to him. So he may or may not want to kill me. So this should be fun!
I’m sure I’ll be fine, but I must realize this could be a huge risk.

If anybody has any good ideas on bindings or the likes, I’d much appreciate them. I don’t believe he is aligned with Angels. The Angels bestowed him power but it appears in the anticipated sequel that the Angels may also be his enemy. He’s just one big fucking rage monster. It’s quite beautiful.

I’ll probably keep a journal or something here on the happenings of these summonings.

“They are rage, brutal, and without mercy. But you… you will be worse. Rip and Tear until it is done! So you walk eternally through the shadow realms, standing against evil where all others falter. May your thirst for retribution never quench, may the blood on your sword never dry, and may we never need you again.”

Well he tried to attack me

But it was a success. Turned into an evocation by the looks of it. I recited the testimony and got into a trance. Lit a red candle.

Then the fucker snuck up on me. Got me good too, luckily my spirits were there to help.

Restrained him, told him to help me out. He didn’t like the fact I worked with Demons (as expected)
I reminded him he did the same at one point, and that these are means to an end, and if be believed in justice the slightest bit, he’d help me out.

So he did. That part I won’t get into right now.

After he had gone to do the business, I figured he’d try to attack me again once the work was done. Of course, as the lore states, he’s susceptible to lures; so we did exactly that and trapped him away. Banished him back to his sarcophagus, and did the final banishment prayer …and May we never need you again."

But we most certainly will need him again, my friends. This ain’t the last of ol’ DoomGuy. I also await to see how his work does.

For the future I’ll be constructing a, mostly likely, Goetia esc Circle of rage and restraint to at least attempt to hold him back a bit, and probably work on solidifying the ritual. He’s already always fucking angry, so no need in worrying of if he’ll dislike it or not; which he will. Sorry DoomGuy lmao

Thats all for now!

I wonder if the practical application of his power is less about fighting demons and more of malevolent spirits in general.

i havent had too much time to hit him up again; ill have to give him a shot and not expect to be attacked haha that is true though, he might just be a destroyer of malevolence… brutally haha

We should talk at some point soon, would you like my email?

Wait but he’s a fictional character? so how would you invoke him, as cool as that would be. But if he existed, hell wouldn’t be around and demons wouldn’t be soo happy.

Wait but he’s a fictional character?

There’s a concept called an egregore, or group-created thoughtform. Basically, at least in the case of this, everyone’s thoughts and ideas about a certain thing creates a pseudo-spirit in concept of the fictional character, and sometimes they actually connect to a deeper part of the world. A lot of chaos mages work with fictional characters.

Personally, I think it’s ultimately a novelty in concept, but it has it’s uses.

Ahh okay thanks for the information, sounds really cool.

It really isn’t. It is only as powerful as you can empower it to be, unlike most named spirits who can work beyond your means if you aren’t able to do a task yourself.