About a month ago @Morgana9 uggested I should call Hekate.

I made a strophalos, printed a phonetic version of the Orphic hymn to Hekate and on the night of the full moon I first called her.

On the strophalos I had placed a small sprig of yew, rosemary and lavender. For some reason I found it appropriate to hold two crystals in my left hand and roll these around like Chinese meridian balls.

I stated that I want to master any and all forms of Witchcraft. She put her arm around my shoulders and replied that she will teach me.

She also said that the crystals were going to be used in all these sessions.

I have been calling here every night now, and will continue for the rest of this lunar cycle. After the full moon I will bring it down to once a week.

On the second night I added two onyxes to the crystals and rolled one of each around in both hands. The things that I have been doing with these stones is intuitive (or is it…)

Because I have a job that has me getting up really early, and Hekate can ( / should) only be called after dark this had me a bit restless during the first nights.

For some reason I lay the crystals on the ground, about a meter apart and stood on them. (I wear sandals with leather soles in my temple) After standing like this for only a couple of seconds I noticed that my breathing was getting deeper and more relaxed.

The next day I looked up pressure points on the feet, and saw that there indeed is one that connects to the lungs located where I had the crystals. So, motivated by this confirmation I continued using the stones in that manner.

I have seen that all chakras also have points connected to them on the soles of the feet. Sitting ‘indian style’ these points are easily reached with your hands and can be massaged to stimulate your chakra’s. Can’t hurt I’d say.

Another way I use the stones is by sitting on the floor, and placing one of the crystals beneath me (yeah… I wear a yoga pants though…) and placing the other one on top of my head whilst holding the onyxes in my hands. This forces and reminds me to keep sitting up straight. And a straight spine is of course important for more than one thing.

In addition to this I have been putting my wand between my legs, sticking up straight (Baphomet style). Balancing all this requires absolute motionlessness and I find it strangely calming.

On her altar I offer a flower from my garden in a glass of water. The herbs are refreshed every three days, and the old yew has been added each time to a small amount of olive oil. The oil is thus blessed by Hekate and to be used in justified curses. 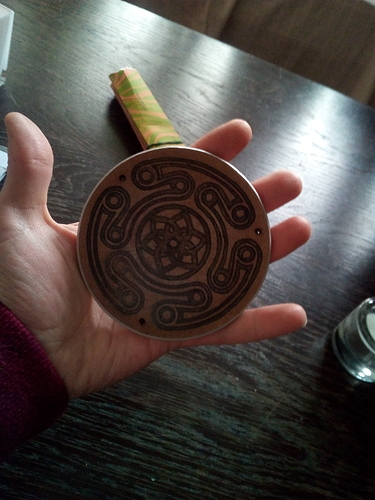 The altar (yes, that is an old statuette of Maria - haven’t had any complaints by either one of them) 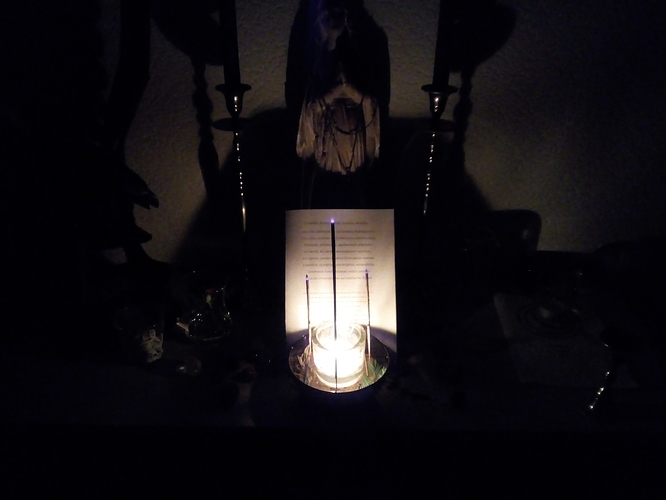 7 posts were merged into an existing topic: Working with the 7 Goetics of your Birthdate