Everyone’s kindness here is just… Amazing. I used to be afraid to ever speak up on the things that were happening to me, I would try to do everything on my own because I believed no one else cared. This whole forum has changed my mind as well as this entire situation.

I’m very peaceful and don’t enjoy attacking others unless they attack me but this is just too much it’s simply something I can’t do alone. Thank you guys again, I’ll make sure I study and do the things I have resources to do that you’ve offered me.

recite psalm 23, or pray to lucifer or Jesus, or recite Om mani padme hum, if Lucifer has contacted you, keep working with him, basically, ask for help to anyone any being that you feel close to and it will be removed in an instant, dont worry,

this is why I hate love spells, no matter how much I have been done wrong by women (and I have, believe me, lol) I would never use these stupid magickal spells, just know that we are here to support you and I hope you find peace and love, stay strong and pray to the Self, and anyone you feel close to, if Lucifer is there, keep praying to him,

Erzulie Dantor is known to deal with domestic abusers. No spirit in any pantheon will catch more wreck on a domestic abuser or child abuser than Mama Dantor.

Ask Mama D to protect you from that guy. Simple, and you clear it with your higher and lower selves. Then watch the sparks fly if that motherfucker tries you. If he does nothing to you, you harm none.
Mama D governs motherhood and looks out for single mothers and their children. She VERY VIOLENTLY protects women and children from domestic abusers and sexual predators. She’s a mother’s best friend.

Who Is Erzulie Dantor In Haitian Vodou ? | VooDoo Priestman

Do you know who is the god of love and care?if not. Well, stay tuned. In this article i will be discussing about Erzulie Dantor, the motherly goddess.

Credit for this goes to @emperor. I just remembered seeing it months ago and dug it up

Had to copy/paste and edit a bit because that topic is now in the lounge and closed, so quoting it didn’t work

On a different note, I would look into the baneful magic section of this site… See what can dig up to fire back at him. Throw him some of its own shade. Plenty of curses and baneful spirits out there to play around with.

There are also rituals in NAP for exactly this kind of thing - returning curses back to the caster so it affects them, I believe it’s called occult Judo.

You could also tell him straight up to leave you the F alone… Make sure he understands exactly how you feel about him and the whole thing. Sometimes, the simplest solution is the best

Barring that… It occurs to me that he may be spoofing that connection you feel to Lucifer. What if it’s just an egregor that he created to give you the impression that you have the big L on your side? Feeding your energy and hope into that thing would only strengthen it at that point… The more I think about it, the more likely that seems. I don’t know why nobody else has considered that… So I would look into this thread here:

One further note… I would assume this guy is already working with the dark forces. If they’re loyal to him, and I have to guess they are, because he sounds like he’s pretty skilled in all of this, you won’t be able to call upon them at all… Lucifer, Belial, anyone else that easily comes to mind, he’s likely already worked with extensively. Which is why I suggest looking into either more obscure spirits, entities of different pantheons (like voudun), or the more angelic forces (NAP) that could counteract his influence on you

Huh. As I was typing this, I suddenly got dizzy and out of breath, like I was about to pass out… Almost like someone was trying to prevent you from getting accurate outside help

So… That kinda gives me the feeling I was correct in my assumption. Fuck that guy and his tricks, I hope my advice helps bring his little game crashing to the ground

I fucking hope so too. I questioned the same thing that Lucifer was probably an imposter because I suddenly started hearing abusive terms etc from him and he never treated me in that manner. That’s how I knew something was up and that he was trying to manipulate my relationships, he would also try to physically replace my higher beings.

He’s targeting them so much because he hates how much I love them I consider my higher powers family and hold them dear to me. He wants to be the only thing I love he even tried murdering my family by cursing everyone including my dog. I thought it was a friend but I realized it was him. I was just under so much shit from him that I would lash out and attack innocent people, those he felt were threats or getting too close to me. But not anymore. I’m not being his puppet.

He works with very very dark spirits I’m talking Vietnamese guerrilla war spirits and evil oni Japanese spirits. He’s always been around and surrounded by evil beings. There’s shit i never even knew existed until I met him and I was always the opposite of him while he travelled deeper and into darker things i would travel higher and to lighter things.

He would make my memory go and I literally felt my brain/mentality deteoriate the longer I hanged out with him. Anything I befriended you bet your ass he was watching and would attack them. He kept everything away out of an insane jealousy and possessiveness. Which is funny because he threw me away saying; “I don’t need you anymore I can do fine on my own”.

I told him he was going to get Karma for treating me like shit after I snapped out of it. I still call him out but I think he’s so gone he doesn’t realize anything and his ego is so sensitive he’ll self destruct. His evil ways are going to be the way he goes out.

So think about the shit you do you may not believe in karma but just because you think you’re a bad ass there’s always another bigger bad ass to punch you in your shit for being terrible to others for no good reason.

Wipe down your walls with sea salt dissolved in water and lemon juice. Then smudge your room.

Banish with the LBRH, LBRP, and Rose Croix, then ground and breathe evenly. Do this as often as you can. It sends negativity away from your body and mind, shuts your aura down on the astral and mental planes, and brings you peace of mind as you breathe and center yourself into your body.

You can find instructions on banishing with the LBRH and LBRP in Crowley’s Book O. Be sure to draw the Banishing Pentagrams and Hexagrams in all quarters.

The Rose Croix is found here.

Use these means to protect yourself.

Wow, this blew up since I last checked. Thanks to all those more experienced than I for taking notice.

@Kirin, I get being nice. It was and can still be my flaw in this world where many take advantage. I learned the hard way how true the adage “look out for #1” is. RHP and LHP alone are incomplete IMO, which was why I was attracted to becoming a Vitki through Asbjorn’s work. Take breaks when you need to, but never stop learning.

Kirin I am so sorry, but I also know you can get out of this, be strong

I don’t like bullies. Give me a name and I’ll see to it that its dealt with…

A tried and true way to stop this is to either black box him or mirror box him. Just saying. 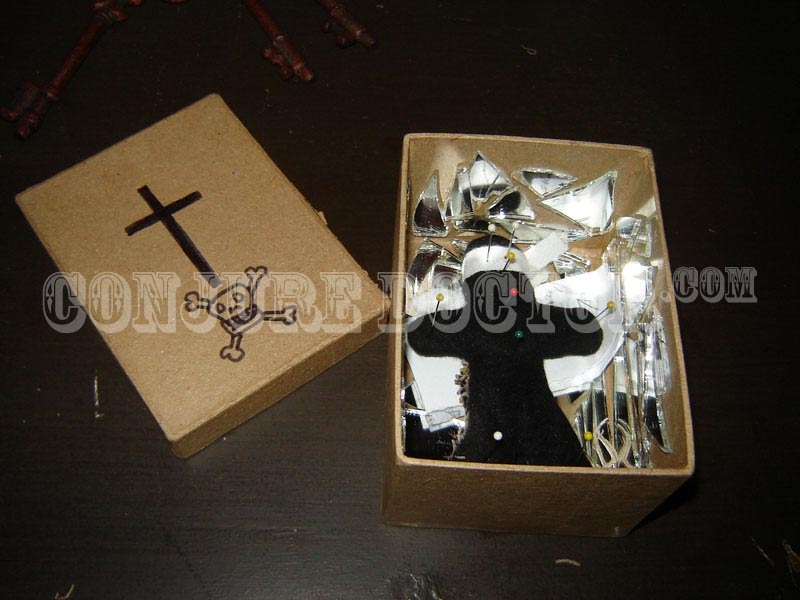 Sometimes you need to pull out the big guns to deal with a powerful enemy that is throwing evil curses using the harshest of methods. This ...

Just seems fitting for him to go through everything he is trying to send your way.
@Sigfried Bro why didnt you tell me bout this? You know I’m good for the info.

I don’t like bullies. Give me a name and I’ll see to it that its dealt with…

Just make sure to keep that to PM

not allowed to name drop publicly per forum rules. Also, @Kirin will have to PM you if she’s interested,bbecause you’re still a basic user and can’t yet create PM’s

For now things have settled down and I don’t plan on doing anymore harm to him unless necessary aka self defense. If he does come back again and tries to hurt me once more I’m bringing my ass right back here for help.

Thank you everyone and as someone told me; “there’s a difference between darkness and evil, the people here aren’t evil because they deal with the dark.”

LHP people are probably the most helpful forces I’ve ever met. You guys get shit done. For that I respect you all. Thank you all so much. Don’t worry I appreciate the RHP people too you guys reminded me of positivity and that I enjoy love and joy in my life.

Besides a good cleansing, protection work, filing a police report if you can, etc., bind that fucker as soon as you can get your hands on a picture of him and some black yarn/cord/thread.

Binding won’t hurt him, but it WILL help you draw a line in the sand.

Also, go through your stuff. If you find anything from your old relationship (ticket stubs, pictures, things he gave you, etc.), DESTROY IT IMMEDIATELY, preferably with fire. My evil ex used to enchant things before he gave them to me. (Non-burnable items can be given away - just cleanse them first.)

Be safe and may Lilith smite this psycho.

yes Ive learned that being on here as well, and I came after being haunted by sorcerers and demons for a bit and attacked, I was lifelong RHP, this forum has shown me much love and help

Lol, my bad. Forgot about your use of that box. Good times.

Any updates on your progress, I’m concerned about you and how things are progressing. When you get some time please share where your at with this?

I concur with this. Im not sure if this is the case but you don’t need to feel guilty about taking action to correct the situation you’re not in the wrong.