A couple of questions for Baal

I’m not sure if anyone here is communicating with Baal… I would like to ask him a few questions. I have a special interest in Baal since he is the god of my ancestors!

1- Are you Hadad, Melqart or which Phoenician deity?? And do u mind being called by your name instead of your title?

2- how do you feel about the decendants of your people being mostly followers of abrahmic religions nowadays, and does it annoys you when your ancient temples are turned into museums and theatres?

Thanks all in advance

Acvording to rumors he has a lot of names whit haadad. Phoenicia. Not sure. Some say close to enki god. And yes its a very small cult of him in brazil. Some say its belphegor, and it suks his temolos are museums etc.

Personally i think Bael, the entity most associated with the title Baal is an aspect of Enlil the Sumerian storm god.

Baal Hadad is the Phoenician god of thunder and storms… most cultures in ancient Syria borrowed their mythology from each other anyway!

Baal Hadad is the Phoenician god of thunder and storms

Any relation to Thor?

Forget the title then and just call the name of the god you want contact with.

I want to know which one of them is “king Baal”?

Baal means Lord or Master, many spirits overtime had it, including the egyptian god Set and the hebrew one.

I worked with Bael recently, The Ba’al Hadad that was revealed to me was cananite one and his babylonian and sumerian counterparts Enlil & Iskur So heavy realationships to Storms & Fertility.

Also No to temples being museums as it keeps them alive and people visit them but yes he was mad at the destruction of Queen Zenobia’s Temple which was dedicated to him. She has reincarnated and will have her revenge for the destruction of the temple.

I have just read that Beelzebub and Baal, Ba’al, Bael, Bel, and Baal-alzabul are one in the same from a few different sources.

The story of Beelzebub, initially known as Baal, a pre-biblical god worshipped in the Middle East, furnishes illuminating insights into how gods may reig...

Like someone said already: Baal means God or Lord so I feel that any references to a deity named solely “Baal” could really be referring to any one!

“Like EN in Sumerian, the Akkadian bēlu and Northwest Semitic baʿal (as well as its feminine form baʿalah) was used as a title of various deities in the Mesopotamian and Semitic pantheons. Only a definitive article, genitive or epithet, or context could establish which particular god was meant.[19]” -
Baal Wikipedia

Baal (/ˈbeɪ.əl/),[a] properly Baʿal,[b] was a title and honorific meaning "lord" in the Northwest Semitic languages spoken in the Levant during antiquity. From its use among people, it came to be applied to gods. Scholars previously associated the theonym with solar cults and with a variety of unrelated patron deities, but inscriptions have shown that the name Baʿal was particularly associated with the storm and fertility god Hadad and his local manifestations. The Hebrew Bible, compiled and cura...

I implore everyone to read that wiki. My head is spinning… It seems impossible to decipher.
Ba’al Hadad may or may not be Ba’al or Hadad, probably not Bel or Beelzebub… Is the Mad Hatter writing this shit? jeez

Well, the only way anyone is really ever going to know is to evoke both and see for themselves, which i encourage everyone to do. For me they showed up looking different, sounding different and acting different, so i treat like them individuals. Now they could be different aspects of the same entity but let others make up their own minds on that. ¯_(ツ)_/¯

Which “both”? There are 5 different (or possibly the same) Gods I have just listed. There could be more names I just had to stop researching because it’s all so convoluted.
I agree with the 'figure-it-out-ourselves" method. I find that the written word barely discloses facts unless one already knows what the facts are for themselves.
Sooo… I guess we better get to evoking. This might take a while lol.

I have never evoked before. A god, whom I call Bel or Beelzebub, follows me around in the form of a fly. He pesters me and looks out for me. We speak through divination (cause I don’t speak ‘fly’ even though he thinks I do). Anyway, I was searching for his sigil because I wanted to try sigil magick and evokation for the first time (I’ve got some projects he wants to help me with). That’s how I stumbled down this rabbit hole…

I always imagine that Beelzebub said “Lord of the Flies? Yeah, sure. I’ll be that too. And I’ll know EVERYTHING THAT GOES ON EVERYWHERE FOR ALL TIME”

Over a thousand entities that i’ve heard of who have the title of Baal, i’ve been given it as well.

The two i was referring to were Bael and Beelzebub.

Ba‘al Zəbû “Lord of the (heavenly) dwelling” and he is indeed a master of divination, The Hebrews slandered him by changing it to Lord of Flies or Lord of Shit might be a better translation, But Zebu has a somewhat good sense of humor and will take on their insults with pride.

This Sigil for Beelzebub has worked very will for me. 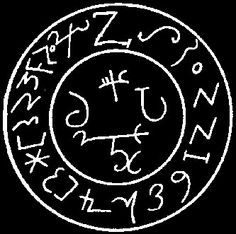 Are you saying he is the same entity as Beelzebub?

I agree, he does have a good sense of humour

Thank you so much for sharing your sigil and enn!

Beelzebub would be his more demonic side, and you can totally work with him like that, but the more you use the name Zəbû the more that purer essence well come forth, again nothing wrong with just using Beelzebub.

That Beelzebub/Zebu, he has been my favorite so far! Sorry Lucifer, maybe you can win me over! Lol