So let’s get right into it-This story happens October 2018. I began to dwell further into the occult and began to do Astral projection. At the same time, I learnt of past lives and began to find out what made me who I was today. There’s a girl-I’ll refer her as Loki’s daughter for privacy reasons.

Loki’s daughter and I met on Discord last year and in the summer we grew really close, she would call me “Best Boy” and so on and even would flirt with me and by the end of October I decided “I gotta tell her the truth” because my feelings for her were increasing. Day and day we would talk and eventually I confess to her with this image because Corpse Bride was her favourite movie 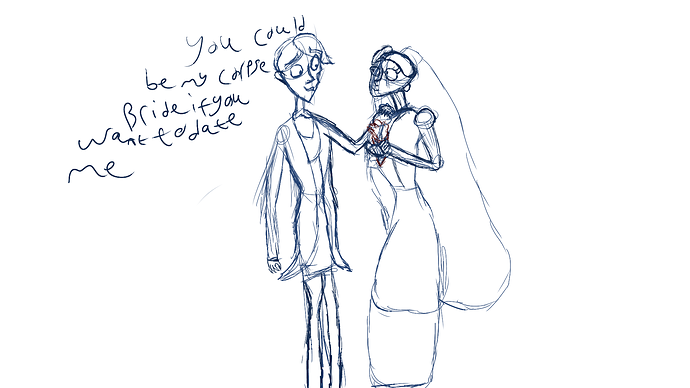 November 1st comes around and she says yes-shortly later a couple days after, she ends it off with me. Says it’s to do with exams and shit and eventually just well becomes bitchy to me. Two weeks of this feeling inside of me and I just don’t feel motivated to do anything. I did everything with her! We would watch movies together and everything on discord. I’d tell her everything in my life and she would say everything to me as well.

Through all of this I began to awaken my godself and I found my spiritual lover. Couple days later on Thanksgiving, we married on the Astral plane. This new lover of mine I felt such a connection to and she would protect me and still does. Freyja-my matron not my lover, she and I were really close to each other and would help me out.

February comes and I invoke Freyja for answers and she gives me them and then tells me that eventually my friend from Cyprus will confess but I must take the first action and to be patient. Don’t be so impatient you are blind to the other’s issues and that in time all will be revealed.

Lucifer came to me two days ago as I meditated and told me to go to my friends higher-self. I did and she had kissed me and led me to her dreams, where I was disguised as a dog and she was lead out of a forest by me and onto a mountain top where I revealed myself-touched her stomach and she was pregnant.

Now then what I need answers to is my spiritual lover, is it my friend from Cyprus? She’s not spiritual and has never gone into the occult. I’ve began seeing more and more visions of her and I together, kissing, sex, pregnant and everything but I also tell myself. Is this infatuation or love? And also say “now now, you’re a teen with an overactive imagination, could just be your desires”.

I literally cannot tell but I trust Freyja with all my life because she’s helped me with some shit and I genuinely want to know what’s going on. I am ever so patient but I want to know what is going on. Can it be that this spiritual lover of mine is really her godself?