What is YOUR underworld?

I know what the underworld is as opposed to the middle world and the upper world. But I don’t understand what is your personal underworld. I know a shaman who has a business and he says that sometimes during his healing sessions he goes inside his customer’s underworld to find curses etc. He says that it looks like a garden, that inside you can find power animals, you can find spirit guides, you can plant flowers etc. He says that everyone has an underworld… He has already worked on my underworld, he said that it was full of thorns and when he’s removed them my dreams became clearer and my temper has changed. Only appart from this shaman I have never heard of people’s underworld anywhere, not even on this forum…

Yeah, it’s a part of the 3 worlds model used by many shamans, also known as the Lower World. I’ll copy you a bit from my tutorial on it:

[quote]Below the World Tree is the Lower World, which I describe above - this is conventionally the first World visited by beginners in this paradigm, and it’s not an “underworld” or in any way hellish.

It tends to house earth-related entities, animal spirits of various kinds, and other “natural world” spirits, and it is possible to meet an entity form of your own Death there, but this isn’t a dangerous thing and can be educational - but it’s not something to begin with.[/quote]

By “not an underworld” there I mean, not something “below” or inferior in terms of the desirability of going there, nor dangerous, sinister, etc.

Mine is a beautiful garden with daylight sky with multiple moons and stars, where colors run like waters.

Yes and no - you know Venn diagrams? 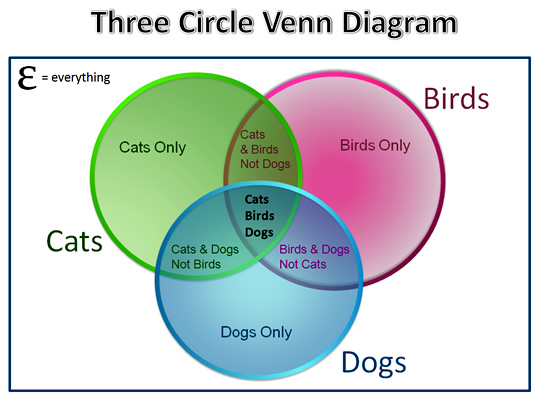 ^ That is just an example, they have circles and they overlap and in places, more than 2 come together.

For the sake of this explanation, your “circle” is your reality bubble, the sphere of things you can directly influence through thought alone.

When you begin shamanic work, the first “circle” you try to overlap is the World Tree, the axis mundi, a concept found commonly around the world in all peoples regardless of cultural norms, level of technological development, and IQ.

So you, your little “circle” so to speak of consciousness, begins structuring the World Tree and then that overlaps you onto the primal archetype.

In core shamanism trainings, the next act after the World Tree link is to retrive an animal spirit helper, a second “circle” of consciousness that opens you up to even more power, influence, and potential knowledge.

Then, they will usually partner you up with another person and you immediately begin learning to journey FOR that person, to help them in some way - this causes their “circle” to open up to you, as a force granting more health, life, etc., all things we are spiritually inclined to want as humans.

So you now have your little “circle” being not just “in my head” which is the default state of an average joe’s daydream, but connected to the primal axis mundi, secondly, being permitted to influence another human’s reality, and third, you’re linked to an animal spirit who represents (arguably) spiritual forces that are transcendent compared to everyday consciousness.

With time, your circle grows to encompass many different circles, some people the little reality bubble of other people you’ve helped, and other kinds of spirits.

So, all the things within someone’s “circle”/reality bubble are both personal, and also, accessible to be shared by people who have learened this method.

12 Likes
Never thought I'd do this, but here's my experience with...Archangel Michael
Premonition pulled from a collective subconscious before chaos magick?
KissOfTheDragon August 27, 2017, 8:31pm #6

Your own Underworld can be whatever you want it to be. You have your personal Underworld, and then you have parts of it that are shared with others. This is largely decided by how you relate to others. As most people that are Sheep or Herd Minded tend to have the same underworld, like found in whatever religion or group they participate in.

Hmm yes I understand. But if we all have our own little underworld, middle world and upper world, why do shamans only work on our underworld?

Underworld is associated with the Past due to Imprints on the Mental and Physical level… this is up to and including imprints existing in the form of DNA such as your Ancestral line. It is essentially your karma. Thus, the Underworld and Middle World are more intimately linked. Middle and Underworld = Past/Present. The Upper World is more a by-product of the other two, which are karmic patterns/blueprints, thus the Upper World can in a sense be equated with Future scenarios in a time sense.

The first two are essentially your Symbolic Patterns, which can be seen in the content partially you see in the Underworld.

And when I’m told that curses you receive are to be found in the underworld, do you agree with that? Can you explain it? Because you’re cursed in the present. Nothing to do with the past.

Well the Past/Present/Future in a sense is just sort of a logical order of how we order or understand our world. I mean your DNA for example already exists within the past/present/future… because it holds both the blueprint of the YOU that exists now, as well as the blueprint of those whom came before you that MADE YOU… and to a certain point in the future your DNA will live, and may if you choose to continue on through descendents.

So yes curses basically just play into the makeup of who you are. For example, it may seem like fate or just random odd circumstance, but it has been my discovery that just about everything that happens to us is somehow influenced by and woven into our karmic pattern. So not meaning to put a guilt complex on you or anything, just figure out what it is you need to change at the smallest level. The whole shamanick underworld theory is only useful as far in as it allows you to begin to analyze all your blessings and curses and isn’t just some WooWoo magickal theory thing.