I’m going to be evoking prince Seere
Any suggestions on what he likes that I can offer?

https://www.deliriumsrealm.com/seere/
This is something to read online. It might be useful

Has anyone evoked/summoned Prince Seere? What was your experience? How did you summon him?

Oh thank you very much! This is an old post, although I do greatly appreciate your advice and insight : )

sorry updated with new info: I rarley use this forum anymore and I know this post is old but the search bar is often used and it’s at the top so heres some stuff for you.

no tools evocation: My Promised Evocation Guide [Everything you need to know about evoking spirits (mainly demons)]

this method is also good my only issue is the advice against a triangle. The triangle is a seat for the spirit. If they don’t want to go there and you have no intention of forcing them in there it is very much a formality that doesn’t bother them at all. the demon is going to go via insense wherever it wants. I’ve had demons fly all around during the evocation, i’ve had demons stay in one spot but given it’s not my intention to force that kind of thing (be comanding, be the higher power, but dont be a dick when its not needed) the triangle is never an issue. this evocation method mentions it among negative lines so I’m just clerifiying that here :

Well here it is, my method of evocation. This ritual was written and developed by me after studying dozens of ancient texts, finding all of the previous methods unsatisfactory, doing additional cha…

Also you should always take measures to protect yourself no matter who you are working with ftr which again is more so a coment on that source.

here you go: Praise for Seere

I’d like to give thanks here tonight to Prince Seere. I’m Catholic, a mother who previously exhausted all resources, legal, social, economical and otherwise, desperate for help to escape pure living evil and protect myself and 2 small children from a living monster. I found myself looking to Seere out of sheer desperation at the end of my wits. Seere came to me in the seconds before falling asleep- I saw his face. In every other place I’d sought help I’d never recieved such a quick response,… 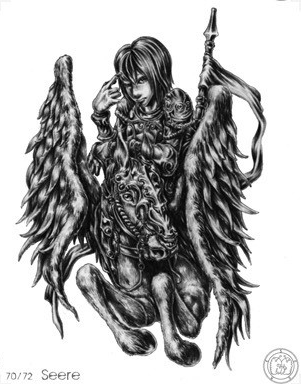 Seere is the Seventieth Spirit of the Lesser Key of Solomon. He is a Powerful and Mighty Prince who works under King Amaymon. This demon is in charge of

It’s important to note that there is no such thing as a beginner demon but he is someone who is easily approachable and good for someone without any experience. Some demons are more forgiving of a new person than others. Some will tolerate common mistakes and forgive you for that ignorance or work with you on honing it and some won’t give you the time of day. You should know the demon you’re planning on summoning like the back of your hand for so many reasons (you should know them inside out before any kind of evocaiton) and you should get your information from everywhere not just this forum on the matter. Look it up on youtube, buy grimoures (the goetic workbook by S.Conoloy is a really good I like) and research around the web. If you’re gona summon someone know them, and research them beyond a simple article or idea.

Anyways that’s that.Hope it helped and I wasn’t to much of an ass. - Acrians Locket

Edit: one more thing. He’s a nice guy and one of the biggest advantages to him is how fast he works. Seriously the dude is super quick. You need something done quickly or speedily he is who you go to. He can make your spells work way faster than they are supposed to. His speed is the biggest appeal to him for me. He’s great if someone takes your shit or your looking for gold. He knows alot about alot of shit. So yeah. just thought I’d edit to actually give you some info

I recently worked with Prince Seere on 2 separate occasions. It is so wonderful how amazingly he works and both my desires came true,in a day. Thank you so much Prince Seere for hearing me out and making it happen real quick

I’m most excited about communication with him. I’m very new at things and I have been evoking him but have no means to communicate except through my pendulum which I’m also new at but I get strong answers so I’m trusting. I look forward to seeing him one day with hearing how beautiful he is