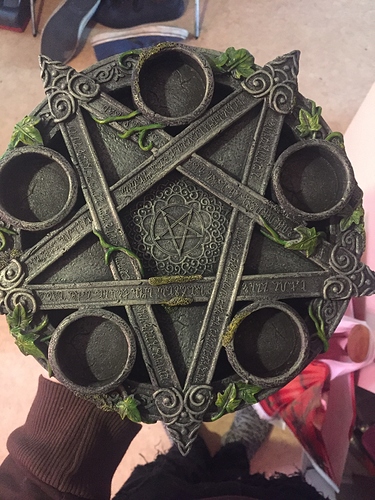 This is what my mother got me she seen it on a website but it kept calling for her to get it for me I feel like I need to use it for something but I’m not sure what for.

I may perform a divination however I would like to here your thoughts on this.

I’m getting a vibe of bonding to the earth, drawing strength from its permanence, resilience, and history, and also the local major land spirits. I saw a pentagram kind of naturally formed by the earth, on the ground in grass, in one of the powerful dreams I had when working with Ahriman, and this reminded me, plus it’s noticeable it represents greenery and life even though it’s otherwise very metallic-looking.

Divine alchemy / alchemy of the highest order, that’s what came to my mind instantly. I think i have even seen this in something related to alchemy, but can’t remember exactly where??!!!

Looks like Elvish, from Lord of the Rings: http://www.omniglot.com/writing/tengwar.htm

I know that I am very late in replying to this, and I apologize for that. I have actually been mulling this over since you first posted it, @treyguinn. It has been niggling at me, so I finally decided to answer it. I am a big Middle Earth fan, so I am going to first address your question from the Tolkien standpoint, as then add a few bits and pieces about Merlin (who is very similar to Tolkien’s wizards, anyway, at least in how magic goes). I’m a fan to the point that I would totally write a …

Llaurentieu–I’m going to take a crack at this, because I am a huge LOTR fan, and have been all of my life. NOt only that, I have worked the dieties from that mythos in the past. I am guessing from your answer, Asbjorn, that you haven’t read the books (which is fine), but for those of us who love Middle Earth, the movies are absolute trash compared to JRR Tolkien’s writing. 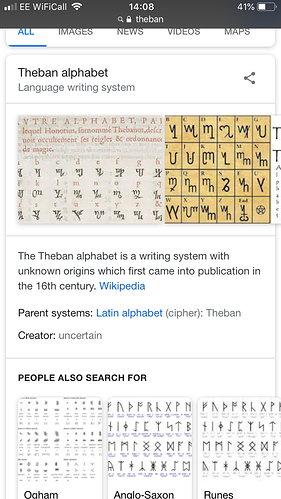 Could be a sign to work with this as well then.

Try calling up some energy and scry to the left side of the item, write down what you see without trying to analyse it, then scry to the right side and do the same.

This MAY give you a glimpse into the Cause (left) & Effect (on the right) of this item and all its meanings in your life, I picked this up from my demonic Child and it seems to be how demons (possibly, other spirits as well) view things, as chains of cause and effect in place of simple calendar-style linear time.

I have used this with great success, and it can be added to divination as well once learned to take a reading to new levels. And not to boast, but my results using it have been amazingly accurate over time.

@C.Kendall. It is Theban. I just got to this post, saw the writing and immediately recognized it. It was a common alphabet used by the progenitors of the wiccan movement, before it was called Wicca and it was just witchcraft.

Beat me to it…

What do you mean alchemy of the highest order?

Creating Elixir of life, Nectar/Amrita through alchemy. Not talking about just physical immortality or eternal youth.

Inner alchemy of taoism can give both absolute immortality , make one rise above food and drink. And a Nirmanakaya body, that is when ever one wants he can manifest a physical body from higher realm and after working dissolve it instantly.

Indian alchemy of Shaivism which is highly based on purified mercury can give absolutely immortal/non destructible physical body of flesh and blood.

Now all this are considered to be inferior to the effect of drinking true nectar/amrita/elixir, which is even sought by the cosmic gods. Now what’s the recepie of making it, well I don’t know. But in every occult tradition it is considered to be the highest practice, goal of alchemy, not just turning metal/stone into gold.

What would this Elixir give a person?

@Goku
If the Elixir is being sought by the Gods, then what was the source of it in the first place that made people want to get it?

A cup holder for each element.

Bro it’s clearly designed for working with the elements, the four plus spirit, the fifth. And with the theban writing I’d wager the designer/artist practiced old world witchcraft. Have you felt a calling lately to that sort of thing?

I’m getting a vibe of bonding to the earth, drawing strength from its permanence, resilience, and history, and also the local major land spirits

this is out of topic but where can i find something similar to that thing? im interested