Tonight, I called on King Belial to ask him to help me get rid of two enemies. I have been blessed by a lot of help from Andromalius, Azazel, Tyr before and I believe that It is Belial that can finish off these two scums. Tonight, not only did Belial reveal something about the female target’s identity to me - isnt that effin amazing! - he has shown me a way to improve my life and health by quitting smoking. For all these, I am truly grateful. Hail King Belial! Thank you, @anon94321331, for everything you have been teaching me, your compassion and understanding.

Thank you, Satan. My dearest friend.
Glad to work with you again and see your devilish smile.

The king will always be the king

Hey,hey…I wanted to thank the three Ifrits lounging around in my place. You made me learn so much, yet demand so little in return. I am glad and feel honored being able to study your ways. I would love to scream your names out loud one day, if there is the right time for it. Someday.

Welcome @Vvcali. Please post an introduction in the NEW MAGICIAN AND INTRODUCTIONS area, and tell us about yourself and any experience you may have in magick. It is a rule of this forum.

Welcome to the forum @Vvcali

Please introduce yourself as @DarkestKnight explained above. While you’re doing that I will prepare some useful links and send them to you, including my personal experience.

You can also search the forum about “intranquil spirits” and you’ll find lots of valuable information or open a new thread.

To try and make a long story short. I’m not entirely sure of who I’m thanking. This being made themselves visible in a dream I had at the end of all this.

I’ve mostly only worked with angels. I felt it was important to be knowledgeable in other areas and to see if maybe my mind would change. So I joined here.

Around the same time I started viewing the forum I bought from this witch who was at the end proven to be a scam artist.

This being has been with me from the start of buying stuff from her.

The your being scammed voice got louder as weeks gone by of me buying things from this lady. The louder it got the more I started to believe it. Other customers reached out to me with concerns. A lot of information on her end didn’t make sense. I started having dreams with a voice and visions warning me. But she was kind to me and I wanted to trust her but my mistrust grew. But after a powerful dream that night while terrifying push me to stand up for myself. I awoke the next morning a new person.

I was 100% sure she was scamming me and others. Sure enough that day. Huge evidence came to light that she was in fact a scammer, the website hosting her store banned and shut her store down. She reached out to me on a side account and trying to sweet talk me and to get me to purchase from her new store on another website. And then flat out asked for my personal information. Blocked and reported her.

I was fuming. Still fuming. But that night In my dream and the being who had been helping me came to light. Sort of. He had long black hair and looked around my age. He was very loving and romantic forwards me. Then he transformed into a black dragon with sharp reddish teeth and yellow eyes. He was still quite affectionate. I didn’t get a name but I suppose that’s left for me to look into and figure out.

Thank you to the being who was looking out for me this entire time. If I had only listened to you sooner I wouldn’t of been scammed out of that much money and I could of warned others.

Thank you beloved Belial, your sense of emotions, love and connections are so amazing. It surprises me every time (no wonder, why).

Also thank you for every Spirits (or that Spirit) who helped mo to get the book what I wanted, within a day for free! I can’t wait to start reading it and learn!

Thank you to my beloved King Paimon. Thank you so much, my Love, for today, and way beyond.

Thank you @PrinceX
I was interested in knowing your experience because I just casted one a few days ago, for the first time and I wasn’t sure what to make of what appeared on the candle glass

Hi @Vvcali don’t worry about it. I know the reputation of this spell is not exactly positive one, but it’s a spell like any other. I will send you a PM with details because this thread is for thanking spirits

Hope you find the information helpful

Just two days after introducing myself to Belial, and I feel so much secure about life in general. I know my enemies will be taken cared of, my children and I will be safe, and an added bonus? Day 2 of quitting smoking. I was also guided to offer charity work to Belial, on behalf of indigenous tribe children in my country AND stop eating chocolates lol. Overall, a safe, meaningful life. Isn’t this amazing? Hail King Belial!

Thank you St Exedite…I was so worried about running out of food for my daughter & I…I asked you to please help, so I called my kid brother asking for help, and I got a bit of money…would give the pound cake on your behalf to a single homeless mother as promised.

Thank you so much St Expedite!

Thank you, Prince Ipos. That was very informative, you seem to know me better than I do.

Just a quick shout out to “Lucifer” & the Guardian Spirit he has sent my way over the years whom have saved my life several times & advices, has has counseled me so much throughout my life.

Thank you Goddess Lilith for always showing up and making me feel better. Whenever I feel doubtful or I feel alone in this path, You somehow or someway make Your presence known. There is absolutely no way I could EVER deny You. I wanted to show everyone just how real You are. 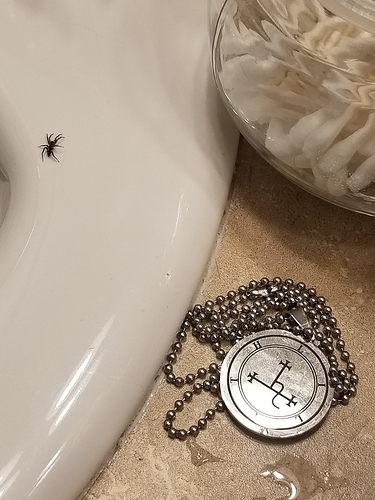 I recently went through an incredibly rough period when a girl I care about lost her will to live through a series of unfortunate events beyond her control. I sent her messages and tried to call her but she wouldn’t reply. I usually vent by wandering out into the woodland and screaming as loud and as ferociously as I can, but prior to this I wandered through the woods the previous night, dropped to my knees and carved Lucifer’s Sigil into the dirt. I sat there chanting: ‘Agios athanatos, Lucifer’ over and over again until I physically no longer could. The next day, before I began my process of ventilation I visualised Lucifer’s Sigil and it was pulsing red. As soon as I saw this I let out the most ferocious scream I could muster. 2 hours later, I receive a response from her and a little bit of hope was restored to us both.

I only asked for his assistance once and he answered.

We just wanted to thank Satan for the conversation we had yesterday, and the reminder of it he gave us this morning. For encouraging us to let go of our toxic doubts and just take care of ourselves and do what we need to do.

Thank you Satan, for the two days lesson on human Psychology!

It was amazing how those hidden parts of the mind work and act completely undetected, unless you dive deep to unmask each layer of the character individually, then connect them all together at the end to understand the big picture… usually got nothing nothing to do with what the mind projects on the surface.

The way spirits can dive in mind is a true miracle. Thank you, can’t wait for the rest