I’ve always felt pulled to the goddess Hathor from the fact she was once worshiped in my country supposedly and other things here and there, should I go through with worshiping her…?

Only if you want to.

She is associated with Isis, who is actually Ishtar/Ashtoroth, my patron. Everything i learned about them came from Zecharia Sitchin’s tranlastion of the Sumerian tablets.
The Necronomicon is based on those as well.

that’s really super cool! i’m gona research more on her whenever i can

She presented herself to me during my first out of body experience and i traveled to her realm. Others like her were there and they recognized me. I had no idea who she was beforehand. She is TRULY amazing and many believe, including myself, we are her starseeds. She is helping me transcend into a new way of living and healing my past traumas.

Welcome @Sera_Lia. I see you joined us back in January but this is your first post. Please introduce yourself in the NEW MAGICIAN AND INTRODUCTIONS area, and tell us about yourself and any magical experience you may have. It is a rule of this forum.

@Waaq @Lady_Eva has worked with Hathor quite extensively maybe she can provide some links you might find helpful.

How do I work with hathor?
Meditate through her hieroglyphs?

Yes, go to her Wikipedia page and study it, Wiki’s pretty solid as a source to begin researching the Egyptian gods, and they LOVED formalised art so the idea of jpgs that everyone can download and have the exact same picture would have really appealed to their culture as well!

And search my posts for Hather candles because I posted a few bits and pieces of advice about ways to honour her and start building a connection.

Oh nice !!! Have you worked with Hathor as well?? Which image is hathors? 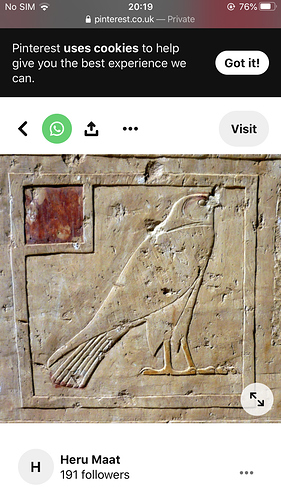 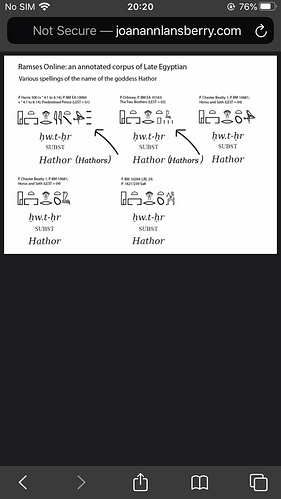 ḥwt-ḥr means “House of Horus” so I use the heiroglyph on the left as a simple visual link, but her imagers is on this page:

Hathor (Ancient Egyptian: ḥwt-ḥr "House of Horus", Greek: Ἁθώρ Hathōr) was a major goddess in ancient Egyptian religion who played a wide variety of roles. As a sky deity, she was the mother or consort of the sky god Horus and the sun god Ra, both of whom were connected with kingship, and thus she was the symbolic mother of their earthly representatives, the pharaohs. She was one of several goddesses who acted as the Eye of Ra, Ra's feminine counterpart, and in this form she had a vengeful aspe...

I strongly recommend trying academic sources first, not people’s UPG about this (mine included), there’s an enormous amount of solid info there and a lot of wishful thinking and 21st-century overlay in the UPG.

Her image at the start of the Wikipedia page I linked is suitable to begin making contact.

so I use the heiroglyph on the left

Which one do u mean?

A square with a smaller square is the heiroglyph for house, so this reads House of Horus," the falcon. I find it easier to visualise than the other renderings of her names.

The image of the Lady with the horns is the best link though.

I’ll do both , happy to work with them right now, thank u !!