i just finished reading dante’s necromacy book. Its good, not really what i was expecting

Welcome to the forum @Isfetlord ! Please take a moment to click the image below and introduce yourself:

It is. If it’s not from the BALG site it’s illegal.
(edit) Not judging just say.

“Honoring Death: The Arte Of Daemonolatry Necromancy” by S. Connolly. (Book 1 of 3)
Amazon.

Was going to recommend this one

Got to say this but

You can check out The Mighty Dead 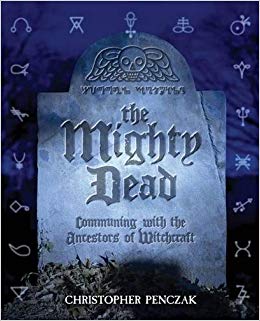 yooo I just got the book and read it, I can vouch Gospel of The Ghouls is a really good book for Necromacy, just thought I would update yall

im getting saturn rising and into the void by J.T. KIRKBRIDE hopefully in the next 2-3 weeks

im getting saturn rising and into the void by J.T. KIRKBRIDE

Hello, got the Saturn Rising and Into the Void books? Care to share your experience working with them? I’m planning to buy Saturn Rising.

Ya i got both of them
Saturn Rising covers the basic of saturn stuff in general but legit in depth with many scientific explanation, how to evoke etc, but does not have an actual rites in it
Into The Void has this 2 weeks ritual + initiation rites that I can attest is working greatly of you want to work with Saturn/Chronos

I also got that Underworld/Necromancy book from Theoin Publishing. If anyone want info on them just lmk.

Great, thanks. Then I probably order them both at once to save shipping costs.

VERY GOOD BOOK. the first few pages offers so much

I am sorry but you are mistaken The Necronomicon is a book of fiction by Howard Phillips Lovecraft!!! The word Necromancy came from the Middle English word “Nigromancie” via Old French from Medieval Latin “Nigromantia” (Niger or Nigr is Latin for Black) from Late Latin “Necromantia” which came from the Greek “Nekros = Necro - means relating to a corpse or death” and Greek = Manteia / Late Latin = Mantia / Old French = Mancie = Mancy which means divination by a specified means!!! Necronomicon is the combination of three Greek words “(Necro = Corpse or Death)”, “(Nomos = Name or Law)”,and “(Icon = Image)”!!! Necromancy is Divination through spirits of the dead by specified means!!! There are two actual “Book’s Of The Dead” the Egyptian Book Of The Dead and the Tibetan Book Of The Dead and neither one has anything to do with Necromancy!!! A Medium is a modern day Necromancer!!! The Arabic word for insects is…alhasharat and the Arabic word for demons is…alshayatin!!! Arabic mythology, a supernatural spirit below the level of angels and devils is Aljina which in English is Djinn!!!

If what you are seeking is power then there are a few things you should know first!!! First Knowledge is Power!!! A Magi has no more power than anyone else every living being has the same power inside them!!! When you send out positive energy from yourself you will attract positive energy’s and like outcomes, on the other hand if you cast out negative energy’s you will attract the same!!! Every bad thing that you have experienced in your life up till now is because of a negative energy you have previously cast out!!! When cast out it is amplified by similar energy’s before it comes back to you!!! All magic is in reality is the “Law Of Attraction” in ritualistic practice!!! And you do not need a book to learn it!!!

Welcome @EVibez. Please post an introduction in the NEW MAGICIAN AND INTRODUCTIONS area, and tell us about yourself and any experience you may have in magick. It is a rule of this forum.

Well that’s sort of true. You see he heard of the order, and then sent a few emails, but he didn’t get accepted at first. But then he got into contact with E.A who then after a few conversations back and forth through email and eventually phone. Took him up as an apprentice and raised him in his house of Vodoo, as well as innitiated him into other currents of magick. Then after about two years or so later he then was released to be taught by the spirits, which led hin into Necromancy, which eventually led to the release of Necromantic Sorccery.

And according to the author himself in an interview he did with E.A: No, this book is book is not for beginners.

Im reading Necromantic Sorcery right now. Definitely interesting. I do not follow his exact currents and work with dead in slightly different ways, but it works amazing for giving me ideas and inspiration on how to keep practicing. Praise Eris, and thanks to this forum for helping me find this. I’ve wanted a good book on necromancy for a while.

An excellent way to be a master Necromancer is to start a relationship with Bune, Bifrons and Naberius

Lol. Wow. I don’t even know where to start. Dante Abiel is a joke. A black magic pyramid schemer to be exact. His “grimoire” is not authentic necromancy. And the fact that he claims to be initiated into voudon is upsetting to say the very least. I’m shocked people actually believe that crap. If any white person says they are initiated into the ways of voudon they’re lying. Period. Ever heard of Marie Laveau? Voodoo queen of New Orleans. Go visit New Orleans and go on one of the voodoo tours and see her grave. Guess what, its not her grave. Its fake. Why is it fake? Because after she died the slaves moved her body in the middle of the night because they didn’t want white people knowing where her body was. No tour guide will ever tell you the truth. And no caucasian pyramid schemer trying to make money by claiming he’s initiated into voudon actually knows voodoo. Its crap. I’m in complete disbelief that people actually believe that nonsense. Also I read his grimoire, its a joke. If you want real necromancy look towards people like the temple of black light. Not this edgey kid Dante.