They didn’t mention your name. But you could tell who they were talking about.

Which video was it? I know they trash Michael Ford as well.

Why not just channel Melek Taus Himself for a book?

There are two important books about Yazidis religion; one is the Black book and the other is The book of Revelation. However both of them not considered “sacred” by Yazidis and aactually written by a westerner. The actual main texts of Yazidi religion are hymns known as qawls.

Qawls are a type of poetry which are composed in Northern Kurdish dialect. They are usually end-rhymed, and can be relatively long (the longest-known qawl has 117 stanzas, while the usual length is 20-60 stanzas). Both their language and content point to an early origin of the hymns, though the oral character of their transmission makes it impossible to give firm dates.

The Yazīdī believes that a supreme creator god made the world and then ended his involvement with it, leaving it to be controlled by seven divine beings. The name of chief divine being is Malak Ṭāʾūs (“Peacock Angel”), who is worshipped in the form of a peacock which is generally identified by outsiders with the Judeo-Christian figure of Satan, causing the Yazīdīs to be inaccurately described as Devil worshippers.

The books can be read online. 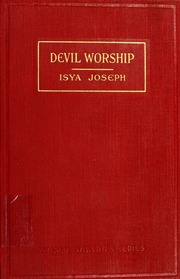 Devil worship; the sacred books and traditions of the Yezidiz : Joseph,Isya :...

Kitāb al-jilwah - The book of Revelations.