Initially I asked for a series of things, but focused on wisdom and finances, I made three evocations with an interval of 7 days. In the last evocation I asked a family member to him, the next day after the last evocation I had a dream. sir, old man, white hair, he was in front of a forest, and he had a little dry and green vegetation, and he started talking to me in English but I didn’t understand what he was talking about, that’s when I started to speak in English with him and I started to understand what he was asking in English, as if I got a momentary gift. I remember I asked in English who it was that was inside that “forest”, and he replied: “It’s him *****” (the name he answered I had never heard of, it’s a pointless name for me, I also can’t say the name he said. He asked me some questions about what I wanted, then I made my request, I spoke a simple sentence in English already answering the questions (guys our dialogue was all in English, initially until this moment).]

After our dialogue in English I spoke and understood what he was saying, he started to speak in Portuguese, which is my native language. What I resented was one of the things I had asked Satan for in one of my evocations that encompassed everything. It was then that you became a child, and you said to me “it’s done, buy a rose, put it here and the deal is sealed”, and at that moment some neighbors started screaming and I heard a child’s screams and everyone started to be a black stripe in the eyes, as if they were blindfolded with a black ribbon. And everyone started to scream just like the Arabs scream in their traditions, I searched the internet for the name of the Arab scream is salty, I found a video that shows the scream https://www.youtube.com/watch?v=rCqVNE71z1U (advance the video and after 17 seconds she starts screaming)

After that I started to float, to fly, I felt levitating, and I left levitating, then I saw some people walking down the street, it was daylight already, and I saw people as if my eyes had a transparent level, I saw people with its colors but it was a little blurry, it’s like I had a plastic on my transparent in my vision, and I was floating to my house, then I saw my mother in the dream she was going somewhere, as if it were the day by day, people were leading their normal lives, it was as if they were watching them in their daily lives, people did not see me but I was flying over them. That was when I woke up in the morning and remembered the whole dream.

After the dream, I came to search here in the group if anyone has ever worked with this “family member, *****, I saw only one post in the entire forum, one person reporting that he has already worked indirectly with this” family member

Thank you for reading this far and if you want to leave a message feel free.

That’s an interesting experience you had. I know I have my own fair share of them. But one thing I do notice is not just his but a lot of them LOVES roses. For some reason they give me roses as signs that it is them. Example Azazel wanted me to draw roses and loves roses as an offering especially Satan. Here’s an example. 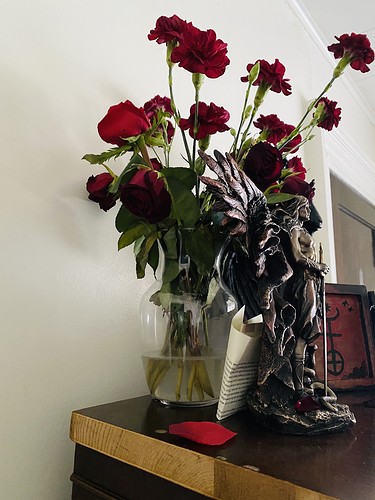 The dream experience was very strong and very realistic.