Working through my herb book

A few years ago my mother gave me an old book of hers to work with: Richard Willfort: „Health through herbs“ An encyclopedia about herbs traditionally used for improving one’s health in different ways. It is pretty extensive and includes some lesser known plants like Glechoma hederacea and some well known species like the good old potato. 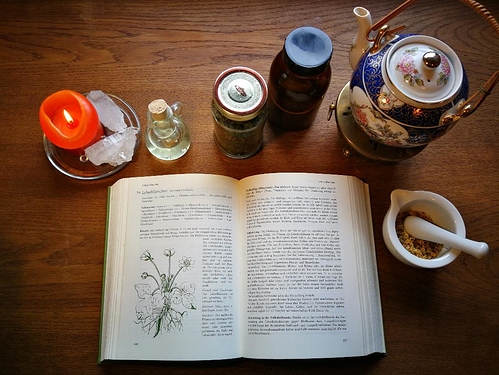 Recently I grabbed that book again in desperate need of something, anything that might help me heal my bone inflammation.

I also realised that it’s a shame I never worked through the book completely, always only reading small amounts.

Eventually, my new project has been born! Each week (I hope I can keep this up) I will research one herb intensely, looking at health benefits, magickal purpose and trying something out (incense, tea, oil…) if possible.

In this thread I’m going to share a short summary of each herb.

The knowledge about health benefits will mainly come from above-mentioned book, as well as from my mother’s and my experience.

As for magickal purpose, I use the book Magister Botanicus – Magisches Kreutherkompedium and a variety of internet sources. So obviously, I don’t own any of their knowledge. (!)

Important disclaimer:
I’m simply summarizing knowledge and sharing it, giving you a glimpse of what herbs can be used for.

I am not a doctor, nor do I have any medical training. Herbs should be used as an addition not a replacement for medication you may use. Also they should be treated wisely and with caution, don’t make the mistake of thinking „It’s only plants, it can’t hurt.“ - Eat one leaf of the wrong plant and it really won’t hurt anymore, cause you’re dead.

If you have a serious health problem please go consult a doctor.

If you have any questions or want more information about a plant, feel free to PM me.

Just a random picture of cat with plant: 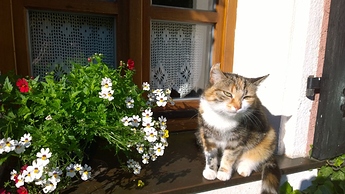 Although this beautiful flower is not at the beginning of the book, I decided to start with it, because it is one of my very favourites and I have experience with it.

It is mostly known for being expectorant and therefore helping to cure coughing and colds in general.

It starts blossoming in march, perfectly in time for a spring makeover (Coincidence? I think not.)

The fresh blooms can be used for a very delicate tea or simply eaten.

Another use is for strengthening your nerves and heart. Again, you can drink the tea, or -my prefered method - use a tincture made with alcohol (you only put a few drops into a glass of water, not drink the whole bottle obviously). It helps you keep your cool on tough days and it also helps you relax and get a good night’s sleep.

Primrose is mainly associated with fairies, Freya and the element fire.

It has traditionally been used for enhancing all sorts of protection spells.

Please keep in mind that primula veris is a protected species (at least in Germany, but even if it’s not in your country, it is still endangered) so unless you planted it in your own garden, keep your fingers off.

In general, when gathering herbs you should never take too much, only what’s needed (and that’s a very small amount in most cases). My method: I only harvest so much that someone else might not even notice that a plant is gone.

Eat one leaf of the wrong plant and it really won’t hurt anymore, cause you’re dead.

It’s 4 days later and I’m still thinking about this quote. All I’m seeing: 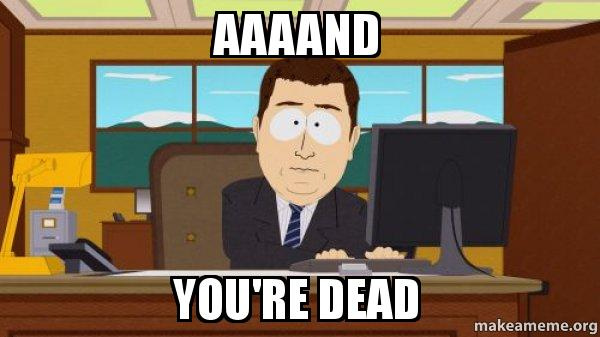 Elecampane (german: Alant, therefore it’s the first herb in my book) is also known as "Odinskopf“ (Odin’s head) which I find quite interesting.

This huge flower blossoms from june to september and the part that is used for healing purposes is the root.
Roots should be harvested in late autumn by the way.

In the past, Elecampane-wine, called Potio sancti Pauli, was said to cure almost everything, even the Black Death, which was more or less successful.

Today we know that it has a blood cleansing effect. I’d go with tea rather than wine though. It supports your fight against diabetes, enteritis, icterus and respiratory mucus.

The root decoction is used against itchy and blemished skin. I’ve been using it on my face for several days now, which was quite brave, because my skin is very sensitive and gets red immediately when I use the wrong stuff. It feels nice and my skin is not complaining, on the contrary, it feels kind of soothing.

Elecampane has always been used for banishing harmful energies and was often hanged above the stable doors to keep the cattle safe.

It is still used in Assumption Day ceremonies in some areas where I live.
.
As it cleanses negative energies, it is no wonder that it is also said to raise your vitality and it „brings the sun to your heart“.

The incense smells earthy and rough, but not heavy. It’s somehow cozy, like I imagine a hobbit’s house to smell. 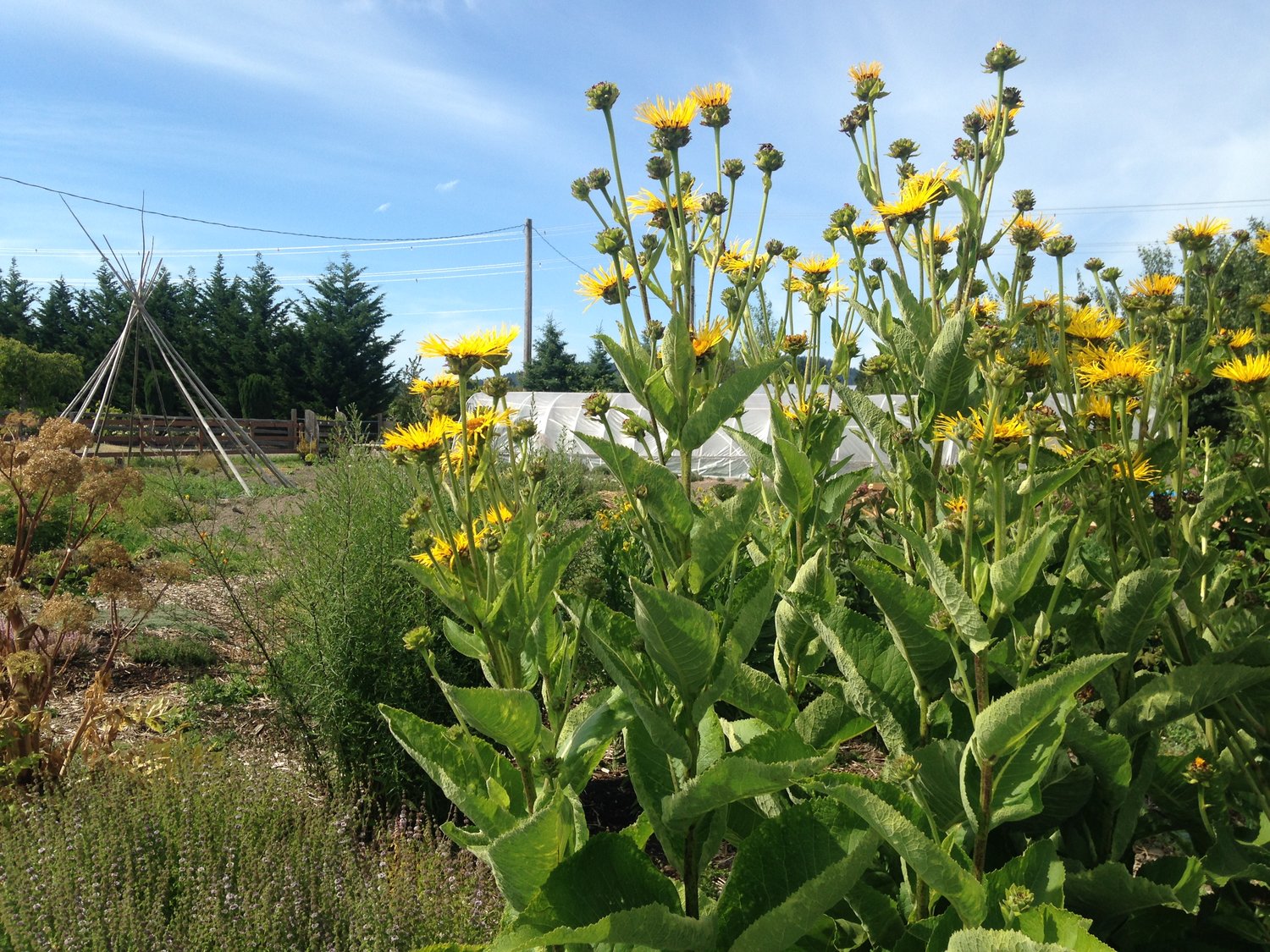 Your place is my dream aesthetic. So many beautiful things!

The place where I grew up is really idyllic, indeed. It feels like the shire to me. Small, peaceful, slow…
The house, hidden behind a jasmine bush: 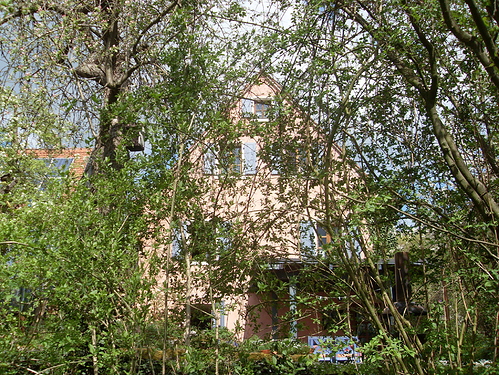 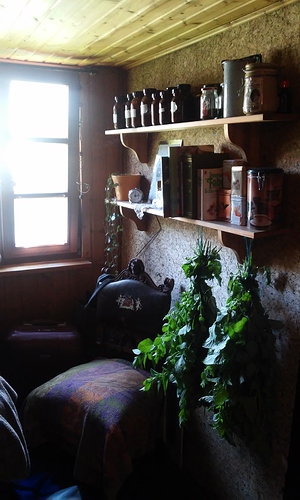 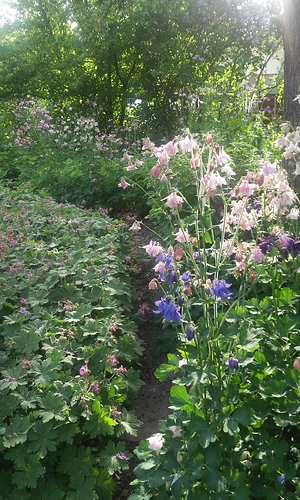 I also should add, the Elecampane picture is from the internet. We have lots of plants, but not ALL grow in our garden, so when I don’t add a description to a photo, it’s not mine. (You can also see it when you click on it though)

White Horehound has been used for healing for thousands of years. The egyptians believed it was Horus who gave the seeds to humanity as a present.

In germanic tradition the first Horehound is said to have grown at the place where one of Thor’s lightning bolts hit the earth. It therefore carries the energy of lightning, and can be used for any spell related to lightning or strength in general.

It is also used for sympathy spells and protection.

I used the incense during rituals, as it can help you concentrate.
The smell is very sweet at first and as it gets stronger it starts to remind me of sitting at a campfire on a summer evening. I can smell the fire, the dry meadows around me, and some sweet wine. A very unique smell.

The part used for healing are the leaves and blossoms, which should be gathered during the summer.

It is mostly used as tea and is associated to benefit several organs like the lungs (pertussis,bronchitis), liver (icterus), gall and heart (arrhythmia). It also increases appetite.

It is also known to have a positive impact on the menstrual cycle, make it more regular. 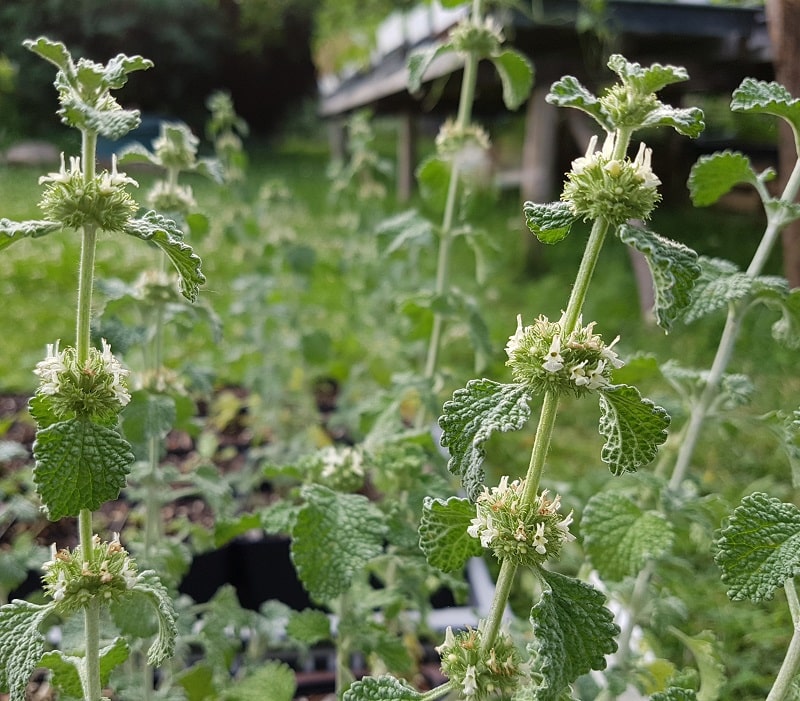 I agree, but also, in my personal experience and opinion, meds make it worse, at least they did to me, and they very rarely help

You are so lucky to live with such beautiful nature near you, i do too, but it is not a garden eith rare flowers

meds make it worse, at least they did to me, and they very rarely help

It all depends. Yes, some meds aren’t really good, and sometimes you just dont find the right ones. But when I had that bone inflammation a few weeks ago, I was really thankful to the guy who discovered antibiotics.
Plants don’t always help immediately either, you have to find the right one for your problem.

True, it depends, i just speak from my experience, though when i self medicate i always did well

This majestic looking nordic plant is well known among herbalists and it is even cultivated in wide parts of europe for healing purposes.

Its root is the most curative part and should be harvested in late autumn. It is used as tea mostly (tastes like celery…), but you can also make a tincture or simply put some roots into your bathwater, as they have a calming and cleansing effect on the body.

Angelica is used for curing gastrointestinal diseases like gastritis, enteritis, colitis and meteorism. It also supports the kidney function.

It is also known to be expectorant and helps curing lung and throat diseases.

Spiritus Angelicae is used externally to treat rheumatism. It is very hard to get nowadays though.

The name already says it all: Angelica is considered to be a holy plant, containing the power of all the archangels.
In the past it has been used by christians to keep witches out of the house. They used to put one part of the root in every corner of the house. (As if that would keep me out!)

However, Angelica can strengthen healing and protection spells.
You can also make a root talisman to protect yourself from illness.

I’m having difficulties in describing what the incense smells like. It reminds me of the smell in some very old houses in my village. Cozy, bright, but also cold. 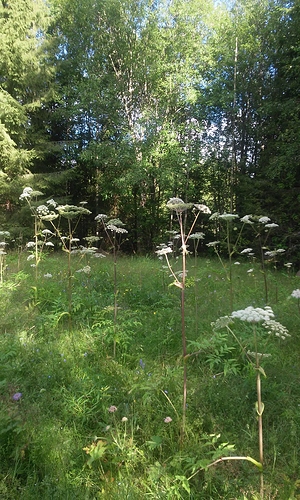 Angelica1920×3200 2.86 MB
While medieval books claim this one to be even more powerful, it is not really used as a healing plant today.

Anise seeds have a similar healing effect as fennel.

The tea is calming and anticonvulsant for the stomach. It is often used by breastfeeding mothers, as the beneficial effects pass over to the baby.

Anise is associated with air and is used for working with the wind element.

Another use for Anise seeds are protection talismans and cleansing rituals.

Just like Angelica, Anise looks very similar to a few very poisonous plants, so I recommend buying Anise, instead of gathering it in the wilderness.

Since this is a very short input, I’m gonna add a special edition:

You think you know your herbs? You’re sure you won’t pick any poisonous plant?

Three are healing plants, three are deadly, one of them is Anise: 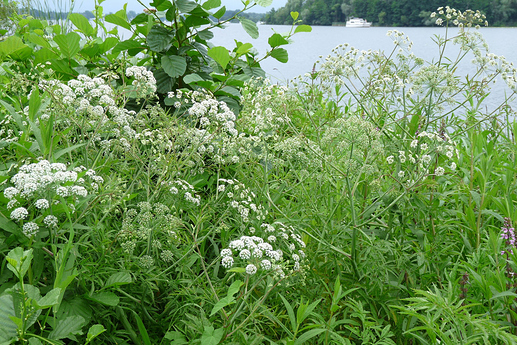 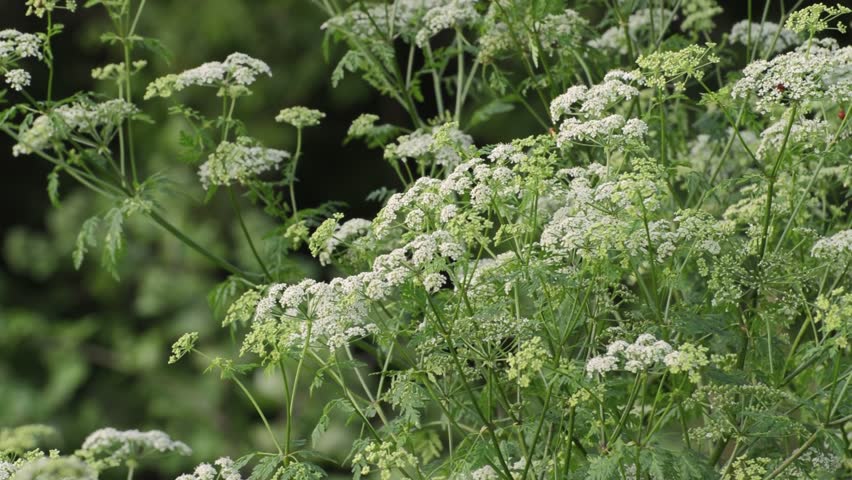 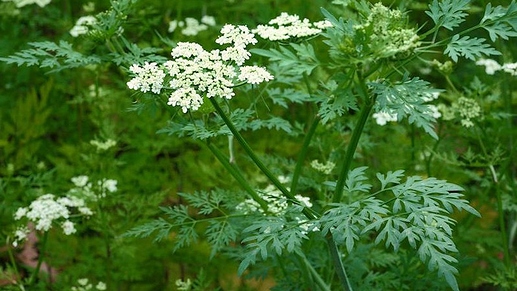 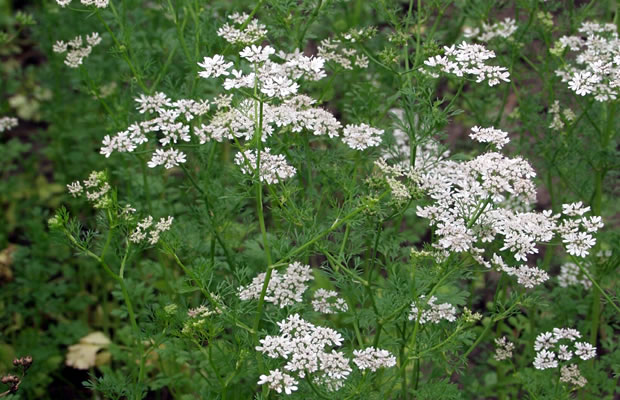 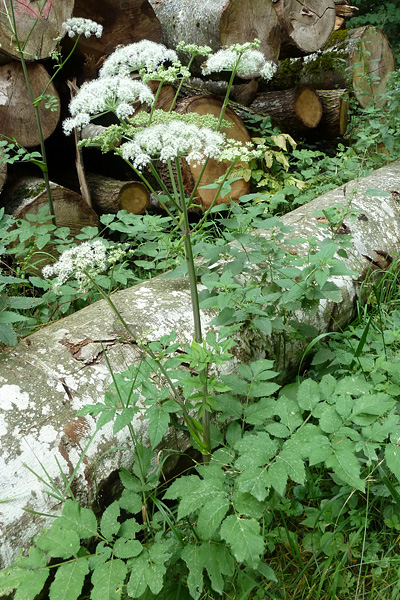 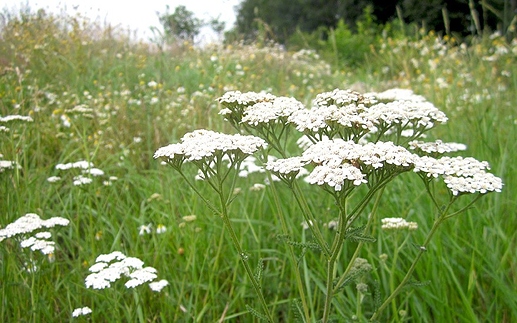 An apple a day keeps the doctor away, right? Right.

Apples have always been fascinating to me, since we own a few different kind of apple trees and they all have different characteristics and apple ≠ apple.

Anyway, apples really are beneficial for one’s health in many ways.
They contain alot of Vitamin A,B and C (don’t cut away the peel).

Apple helps with both diarrhea and constipation as it has a regulating effect and also helps getting rid of toxins and harmful bacteria.

They should never be eaten right out of the fridge though, warm them up a bit. You can also make apple purée and eat it warm.

Apple tea is said to help with rheumatism and fever.

Warm apple juice with cinnamon helps with colds. (mix with vodka and it helps with heartache too

The Appletree often plays an important role in mythology. Avalon, Adam and Eve (I know it’s probably due to translation, but still it is fixed in peoples’ heads today).

Europe has many old customs that contain apples, and some are still practiced today.

A Wedding custom: Bride and groom have to peel and apple together and throw the peel behind their shoulders to form an oracle that predicts their future.

In the past people always let two apples next to the tree they just harvested – for the ghosts of the tree.

Apples are also associated with various spirits, such as Venus, Aphrodite, Hera or Persephone.

It is a symbol for immortality, fertility and love.

Cut an apple in half and two pentagrams appear, one with seeds and one without.
Life and Death. 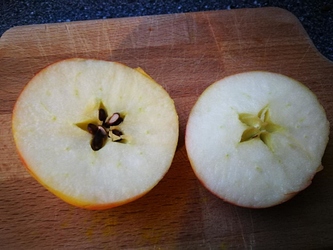 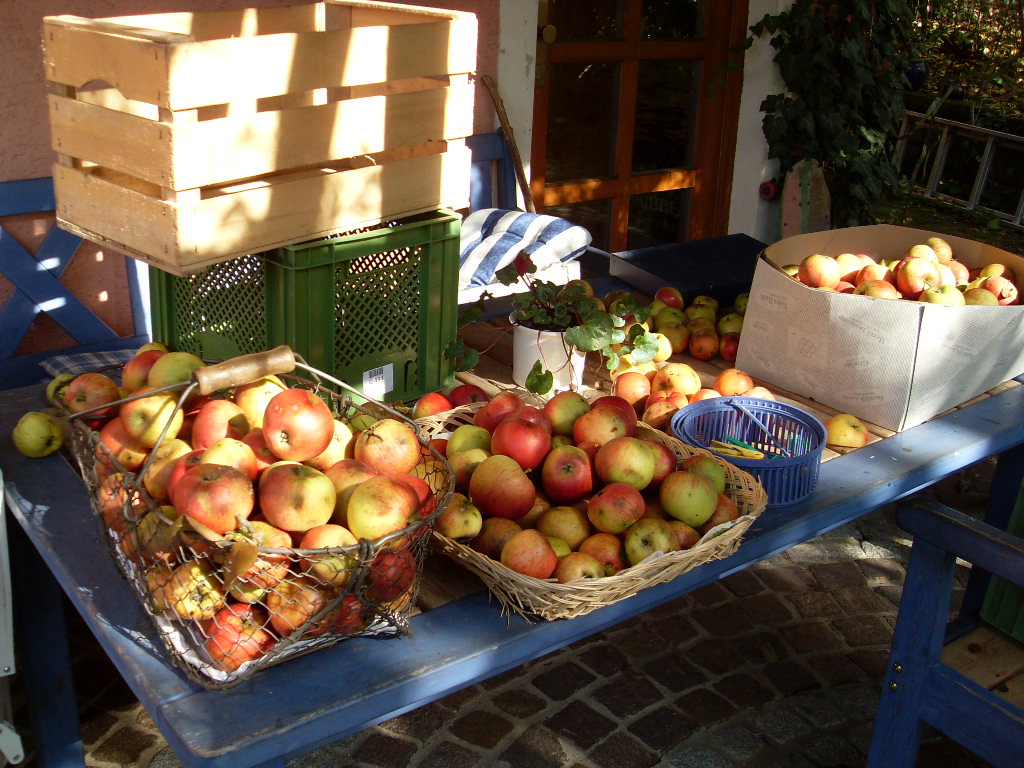 really did not expect the latin name as such, etymology inspired from genesis? since malus means bad or something similar

didnt the romans get inspired by the Bible, i think its the other way around, the way i said no?

No the romans did not get inspired by the bible. They translated the texts and made the forbidden fruit an apple. Apple was already called Pirus malus before that. It is probably a wordplay.
Early pieces of art show Adam and Eve with a fig instead of an apple.