Why is 666 considered the number of the beast?

Why is 666 considered the number of the beast ?

Is the number of human DNA - composed of 6 protons, 6 electrons and 6 neutrons, which equates to 666.

The idea is that we will eventually evolve from 666 to 616 - that’s 6 protons, 1 neutron, and 6 electrons. 616 the number of the super being like made of Light and somehow formless but still material

In one of the oldest written manuscripts of revelations, the number of the beast is revealed as 616. I was also reading some stuff that lady Eva posted on Gematria Which may also have something to do with it. It’s complicated and going to take a while to absorb.

In Revelation 13 (In the Textus Receptus manuscripts of the New Testament, the Book of Revelation (13:17–18)) St. John wrote: "Here is wisdom. Let him that hath understanding count the number of the beast: for it is the number of a man, and his number is 666. He cryptically asserts 666 to be “man’s number” or “the number of a man” (depending on how the text is translated) associated with Beast; an antagonistic creature that appears briefly about two-thirds into the apocalyptic vision. Anti Christ.

Therion in a Hebrew spelling has the Gematria value of 666.

Therion which appears in the New Testament means “wild animal” or simply “beast”. Crowley was called as “the beast” in childhood by his own mother (who he didn’t quite respect), as he was noisy; (the logic behind that was the family was religious, Crowley’s father was a preacher, and children were expected not to rebel not be rambunctious to their family like Satan did to Jehova. Crowley’s father was a preacher; he was a noisy child so he didn’t find this offensive and even revealed in his title. As an adult, he called himself To Mega Therion, the Great Beast and took up the number 666. This meaning changed from identifying in a rascal to identifying in the fire-spirit, the guiding light, the divinity of the solar god.

So with that identity as the ‘great beast’, it is the self-awareness of the “wild” or material nature, connected with its divine essence from above, being embodied below as the center of the balance in the Middle Pillar. In Crowley’s Thelemic Qabalah, the office of the Beast is in Chokmah, and its bride Babalon is in Binah. The number 666 is the value of the sum of numbers 1 to 36. It is the thirty-sixth triangular number, meaning that you can make a triangle with starting at 1 up top, and the bottom row containing 36. Add up all the numbers and you get 666.

36 is the highest number that appears in the Magic Square of the Sun where each row equals 111, and has the sum of course of 666. 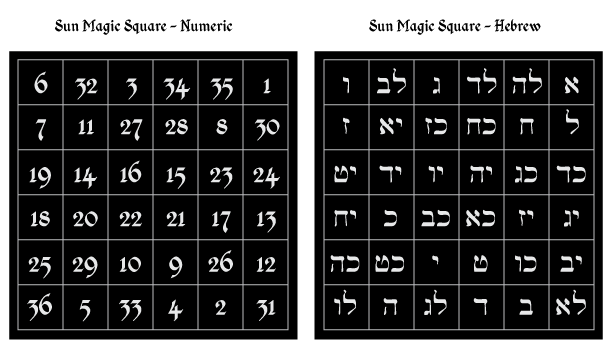