Which of the Goetia has afiliations with psychology? I saw Dantallion but if I ever saw them I'd probably have a heart attack and die

They are scary af no offense

Depends on what aspects of psychology you mean. Many spirits help with knowledge and many with the subconscious, but rarely both.

If you don’t mind though, why are you scared of him?

His physical features look like something out of a scary movie. His body looks like it was melted together and then frozen. I’d have a FUCKING heart attack if I saw him. I do apologise if I’ve offended them. I thought they were a feminine being not a masculine being. I apologise for assuming their gender. 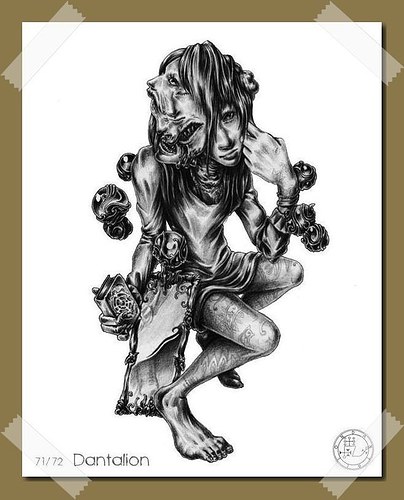 Well, especially for spirits associated with the mind they will often come in the form you have previously imagined them in. Personally, I wouldn’t turn myself away from a spirit strictly due to appearance. Even then, you may have a lot of luck simply asking them to show in a different form.

. I guess I’ll work with them.

You can always start by dreaming about them. Also, sometimes, especially for beginners they won’t even show up visually until you have overcome your fear. I highly recommend some form of meditation or yoga to help you.

Its strange, there is this whole “I’m going to do goetia and see this scary stuff.” but then there is the point where you are like yeah so what and you start seeing the forms as symbolic rather than worrying about it coming to get you.

Its strange, there is this whole “I’m going to do goetia and see this scary stuff.” but then there is the point where you are like yeah so what and you start seeing the forms as symbolic rather than worrying about it coming to get you.

I’ll never get why someone who’s terrified of entities will ever bother to get into the occult in general and demons in particular.

I’m not terrified of entities

. Im terrified of the way SOME OF THEM look …

It is absolutely okay to be scared. It is human nature. We are afraid of lots of stuff that looks different, be it something physical, spiritual or even psychological. On the bright side, fear is something that you can overcome.

How did you get over your fear of Demons: Spirits, Evocation & Possession

Many of us have been fed false information about Demons growing up. We’re told that they’re evil and want to hurt us but with time many of us grew up and stopped believing in all these lies. So what made you lose your fear of Demons?

His physical features look like something out of a scary movie. His body looks like it was melted together and then frozen. I’d have a FUCKING heart attack if I saw him.

Dantalion always comes to me as a baldheaded african american man, very tall, slim and wearing a purple suit. I’ve been working with him for the past 2 years, and he always comes to me the exact same way. Not in the way he’s supposedly depicted. He isn’t scary, he doesn’t give me any anxiety or anything. He’s a great listener, and gives great advice. I have major depression, generalized anxiety, and PTSD from my time in the military, and aside from talking to a licensed professional, I talk to Dantalion when I feel defeated, which is often.

Don’t be afraid to call him. I used to be afraid of being scared shitless when I called demons, didn’t want to be traumatized, so to speak. The very first one I called was Amon and he helped me, then told me to go to Dantalion. They both came to me in a way that didn’t scare me.

I will say that the angel Uriel came to me like 14 yrs ago unsolicited and uninvited and scared the hell out of me. I woke up to him staring at me and it was the ugliest site ever. Ever. I’ll Never forget it. I don’t know why he came and never asked, didn’t have time to because he left as fast as he came.

Anyway, don’t be afraid to call on these spirits just because you may be afraid of what they look like. If you’re going to delve into this side of magick to get what you want in life, have a heart of teflon and face it. Call on them.

Im terrified of the way SOME OF THEM look …

And they look like that because they’re demons… And yes it is normal to be scared. But when someone’s terrified about something usually they avoid it. It’s the human nature.

You can make Solomons demons look as you want.
That’s why they are known as lesser spirits of King Solomon.

I never understood fear of the goetia

idk to be scared of them seems redundant.

I don’t know, I don’t fear them and honestly, never did. Like yeah, I’m sure they would be able to scare me shitless if they reallty wanted to, but I dont know why they would do that, unless for a good reason (or a good laugh lmao)

What do you mean?