Is this current comparable with
Kenneth Grant’s Typhonian Current?
What is this current about.
Where can I find something to read about it?

It’s main proponents seem to be the Temple of the Black Light, who sell what they call “Chaos-Gnostic Satanism,” and are the authors of the book Liber Azerate (which can be found on the interwebs)

“Current 218 calls for the destruction of the cosmos and the omnicide of the human race, and supports evil for the sake of evil. As usual, it supports crime, terrorism senseless violence, gang activity, human and animal sacrifice, and just all kinds of interesting stuff.” - Quora

“Although it was inspired by ONA, it takes things a step further in that it doesn’t perform evil acts in the furtherance of a set of political beliefs, but rather evil for its own sake, and hopes to eventually destroy humanity through the use of a nuclear bomb.” - Quora

Lol I’m sure there is more nuance than this but I found this description interesting and funny.

Yeah I can’t say I blame you, it’s pretty much the ultimate Blackpill. lol 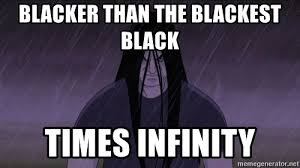