What can I do with this necklace

I have this necklace around my neck that I cannot take off because of how I tied it. I never wish to take it off either. What can I do with this necklace? (I bought it before I started this path) any type of symbolism? 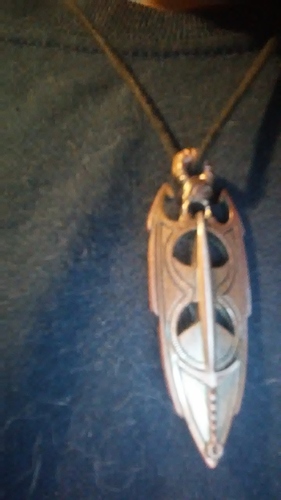 I don’t recognize the symbolism of it, but you can turn it into your own “good luck” charm, amulet or anything else by infusing your energy into it. Any necklace, or object, can be transformed into a magical object. If it’s special to you, then keep it on hand for as long as it holds meaning to you. Sometimes, I think objects “speak” to us for a reason.

Yeah it’s been around my neck for about a year now. And it’s impossible to take off without cutting.

I also found that this topic dosnt have much information. The only thing close is asking a spirit to charm it with it’s energy. I’ll have to look more into this later.

I actually have a friend who had a blacksmith / jewelry maker friend of ours shorten his mjolnir chain so it cannot be removed. It’s a thick steel. Hes had it on for a few years now.

That’s the Amulet of Akatosh, from Skyrim.
Chief Deity, Dragon God of Time, representing the qualities of Endurance, Invincibility, and Everlasting Legitimacy. Game stats-wise, it gives a bump to Magicka Regeneration.
If you wanted to tie something into those themes in consecrating it to your purposes, the build-up of unconscious energy from everybody who’s played those games would probably be a nice unintended bonus.

As @Hypnos mentioned, however, it’s your necklace. Just a symbol, to which you may ascribe your own meaning.

Glad you noticed because I just figured out that you can infact contact these gods.

There’s a reason most pantheons seem to fill out a cast of stock characters, man. I wouldn’t say that, mind you, all thunder gods are just one person with a lot of different hats.

But there are powerful currents to which many of the chief spirits of ancient and newly emerging cultures are tied, and those cultures whose needs are similar will gravitate toward spirits who can draw power from similar sources.

Some HAVE given names, and some are GIVEN names by the ones doing the calling.

You can do that or you can ask spirit to help you too take off,I had this situation and Lucifer helped.

I’ll just cut it if I need to lol

So these could all be a single thunder god or more? Hard to grasp. Could you explain a bit better

So these could all be a single thunder god or more?

Sort of, but not quite. All Thunder Gods are definitely not the same god, with many faces.
But it’s no accident that most ancient cultures HAVE a Thunder God.
And it’s also no coincidence that many of the oldest Spirits in the world have ties to primordial forces like Thunder.

Energy, as power, takes different forms. Different folks are better at tapping into different aspects of that power. Disembodied Spirits often have different strength, or different ways of applying their strengths, than we Embodied Spirits do. Those similar-seeming gods are simply pulling Power from a similar place.

So, when we need somebody who’s really good at divination to help us with a reading, we find someone.
When people need someone who can help them with a BIG issue, like storms washing out your crops, they’ll find someone.

That someone is going to vary from place to place, but they’ll share certain aspects of person, because they fit within a given current. Whether you’re in Seattle or Atlanta, your capable Tarot reader is likely to be a little airy and relaxed, with an open disposition. Double or nothing on shawls and Herbal Tea. It’s not because they’re working to conform to a stereotype, but because those energies are conducive to good divination, and when we take in certain types of energy, they change us.

That cleared it up a bit. So certain energy’s will take the place and the name for example a god from TES? Or even a god that is well know but just uses the other name and energy as a mask?

It can be a bit of a mixed bag, to be honest.

If you just want to call upon the energies that figure represents, you can use your interpretation of that figure as a focus to connect to those energies. No Spirit required. This works the same as drawing protective energy from Obsidian, or Reassuring Strength from a Oak Tree.

If you want to get in touch with an actual entity, your approach guarantees your results.
Possibility One. You use the idea of Akatosh as a tool for connecting with a real Spirit. No well-known god is going to answer to a name from a man-made video game for your benefit. You could use epithets that are given to Akatosh, for example, when calling upon Baldur.
“Invincible One, Shining Son, who will outlast the Dragon” sounds quite nice. But if you call him Akatosh, that god goes “Huh, wrong Number.” At the end of the day, while the writers of TES might certainly have felt very connected to certain energies while creating that character, it’s a human creation. A human’s interpretation can be useful for putting you in the right frame of mind to contact someone who’s actually there.

Possibility Two. You call on Akatosh, and a Spirit answers, claiming to be the god Akatosh. This spirit might be powerful, might aid you with your requests, and have abilities that fit. This is because there’s no shortage of self-serving spirits in the world who will tell you whatever you want to hear in order to get a free complement of offerings and energy in exchange for some fireworks now and then. Mileage may vary between having your credit card info stolen by a scammer in a call center in India, and paying an Escort to pretend to be your girlfriend full-time.

Possibility Three. You call on Akatosh, and Akatosh Answers. And it’s not a malignant Spirit or some other god in a Mask, it’s Akatosh. I would expect this to be the result of not just you, but several others putting their energy into the idea that Akatosh is capital-R Real for some time, and working together to manifest an Egregore. An Egregore is a sort of shared complex thought construct, used by a group to manifest their own small god. Like a Servitor with a leaky battery, because they tend to require a lot more Energy to keep up than they’re actually capable of putting back out.

I like how you put it. I get it now

@SITHISIT is an adept in the magik of Skyrim and folding it into real world practical magik, and might be able to suggest something.

E.g. enchant it as a vessel for Akatosh and work directly with that entity. LotusKing has successfully worked with other Skyrim deities, it’s possible. Sounds like one with valuable attributes that would make a powerful ally, after all.

Some of Akatoshs other names are Alkosh and Auri-El.
As stated before, he is the Chief Deity, but of the Nine Divines.
He was the first deity born from the mingled blood of Anu and Podomey(The primordial beings that created everything).

The aspects of Akatosh have already been said so I’ll skip that.

Alkosh is the Khajiiti varient.
There’s not much about him, to be honest.

Now that the lore is over, let’s talk about the Magick.
That may just be a necklace but it’s still a symbol of Akatosh so you might want to consult with him if you want to use it for something unrelated to him.
As Maulbeere had already said, you can enchant it.
He is the “god-defender of humankind” so you can use it as a tool for protection.
Since you don’t intend to take it off you can use it to build up a relationship with him.

I’ve never really looked into using jewelry in Magick so my knowledge on it is currently limited.

I’ve never even considered owning some amulets of the TES gods, now I might just get some.

I will have to look into that. But as @MalikLucius said about the possibilitys. So if we can confirm akatosh than we will have to do experiments on the others. It would be something to work with the mad god.