What are your thoughts on this video

Seems more likely that if it is true, it is some kind of temporal rift phenomenon, basically accidental time travel. I do not believe for a second that humans co-existed with dinosaurs, though.

Time is not a thing, it’s a concept. We can’t travel in concepts. It’s a mental illusion caused by our mind’s way of processing and storing events in a present, past and future time line. In reality, only “now” exists. That’s why in magick and spiritual work we only focus on the “now” or present… past and future do not exist. This is my opinion on time travel so just from the title of the video, I already had high doubts that it’s true… after watching the video I knew that it’s not true. Most of the print is missing, there is no way to know what it really was. The guy just used his wishful imagination to fill the gap and presented this as valid information that we can use to conclude that time travel is possible. Which is false logic on so many levels. Not saying time travel is impossible… just saying I believe it’s impossible and I think the video is pure fantasy.

Time is not a thing, it’s a concept.

If we stretch it a bit, everything is a concept created by humans. It’s all about comprehension, and most of the time, we must put label on things to pass down to the generation after us.

Our concept of time with the past, present and future is a neccessity. Our spirits might not fully agree with this, but that’s my thought of this.

if it wasn’t a necessity it wouldn’t be part of our awareness… but that doesn’t mean it’s not a concept that only exists in our mind. All possibilities exist now, the ones passed and the ones that may occur in the future. So we can - if we know how - access this information and only focus on the parts related to us and ignore the rest. That’s can only be done or at least starts mentally or spiritually and maybe could manifest for observation, not interaction, physically under specific conditions. That’s different than time travel. But who knows ! Maybe time travel is possible if we apply the same principle in a different way, one day. Many times reality challenges our limited understanding of it. Quantum physics is living proof

I would tend to agree with with you regarding any concept of time travel as a physical function like hopping into the car and getting groceries, but…

If we consider that any ‘point’ in time is really just a snapshot of where physicality could be, I suppose if you could rearrange every shred of existence into a certain configuration on purpose, you could sort of ‘travel time’. But I have serious doubt as to whether that is something achievable by humans.

Now consider modern science and deep space exploration. There are more than a few phenomena we cannot explain even slightly, some of them temporal. Why could those same things be happening on Earth in microcosm? When you consider some of the interesting energetic phenomena here, add tons of energy disturbances in the form of generation of nuclear and electric power, etc, then add the factor of all the psychic energy from billions of humans, and potential geological and solar events, I could see how all this might cause an energetic anomoly that could ‘shift’ a person from any number of sources.

Ancient histories are full of places where people are rumored to disappear in proximity to what were thought of as vortexes. Of course most disappearances are explainable by mundane means, and some probably are talking about spiritual gateways, others were probably talking about a place where an actual anomoly occurred in the best language they had to describe it.

So I am not going to say the video is total bullshit. I happen to agree with the narrator’s premise regarding multiple rises and collapses of human civilization and technology. The illusion of progress, so to speak.

There is no way humans were coexisting with dinosaurs, either. If there were sandal or boot prints, it was not from a Jules Verne style traveler, lol. I have to believe a time traveler is not wearing flip flops, or that your local shepherd or ISIS fighter did not highjack a time machine, lol.

On the other hand, I could believe a scenario where some poor shepherd was looking for a goat in a cave and unwittingly popped into some kind of space/energy anomoly, wandered for all of 10 minutes before before suffocating on the unfamiliar air, and being pooped out a day or two later by whatever consumed his body.

I have to partially disagree on the humans and dinosaurs thing. While not a time traveler I think there is more than enough evidence to suggest that out current accepted understanding of our timeline is quite wrong. Between footprints and reliefs in South America depicting humans interacting with dinosaurs, something is not add up with how we view history

While not a time traveler I think there is more than enough evidence to suggest that out current accepted understanding of our timeline is quite wrong. Between footprints and reliefs in South America depicting humans interacting with dinosaurs, something is not add up with how we view history

Oh I agree. I’m not saying humans never encountered any kind of dinosaur, I’m just saying they did not co-exist during the peak of the dinosaur’s reign, from a geological perspective. Humans probably go back a lot farther than we imagine, but not 100’s of millions of years walking around in sandals. They would have a bitch of a time breathing at any relative size to those prints. I don’t see a guy in boots or sandals as also walking around with high end air filtration on the norm. Which would have to push into the humans are aliens to Earth thing.

Which is really another possible cause for boot prints, lol. If you extend disbelief, our galaxy is billions of years younger from the suspected emanation point of the universe. It would give another species somewhere else a very long time to develop efficient space travel. Maybe the prints were left by exploratory missions who decided “no-go” and chose to check back later, in which case it could take thousands or millions of years for a return visit. In their own histories, records of previous visits could be lost or destroyed for any number of reasons, and for all we know we are not even aware of each other.

Lol, just having a bit of fun here, but you get my point. You can take the writer’s license to just about any bit of circumstantial evidence and come up with a hell of a story. Cults and many religions do it all the time.

Yeah there’s definitely got to be some sort of space time anomaly that caused it or perhaps real time travel machines who knows but yeah definitely not humans living with Dinos.

I agree with you that in some cases, unintentionally as far as we know, people could experience some kind of teleportation… sending them to a different point in space. There are many accounts in history that supports this possibility. In some ancient manuscripts it’s mentioned as something we can master as a craft, of course connecting it to witchcraft and magick. But none of those stories ever mentioned on event, that a human managed to “travel” physically in time. The only way to do that, as far as they mentioned, is through the mind or the spirit.

A major issue considering physical time travel is the fact that we’re talking about the existence of two material objects at the same time. The same matter, sharing the same time and space. The famous story of a man going back in time to meet himself as a child, is a clear example of it. But if we keep in mind that all matter is nothing but energy in form at specific time… then any movement in time would cause any object to exist in two points in space and time. Not necessarily in the same form, for example the same person in different age… but the same energy would have to exist in two different forms no matter what those forms are. So if a man managed to travel back 2000 years in time… he would co-exist with the same energy that forms his body, but at that time, it would be forming something completely different, maybe a tree or butterfly or a bat or maybe it’s spread between different objects, not only one object. Is that scientifically possible ? logically it’s not… but scientifically… I’m not sure . considering what we know today about quantum physics.

Our only hope for now is to catch an accidental time traveler who managed to get something from the future other than a photoshopped image or low quality video recorded on windows 10 laptop. Or find one buried in the sand waiting for us to uncover a print of modern day sneakers on a 10,000 years old rock or a flash memory driver given as an offering to an ancient God in a 5000 years old temple with a petition asking to take him back to the year … 3250!!

But until then,all we have to prove time travel is the delorean.

The DeLorean and Chuck Norris.

Chuck Norris came back through time to save humanity from a secret peril. We’re still here, so he must have succeeded, right?

I believe so yes 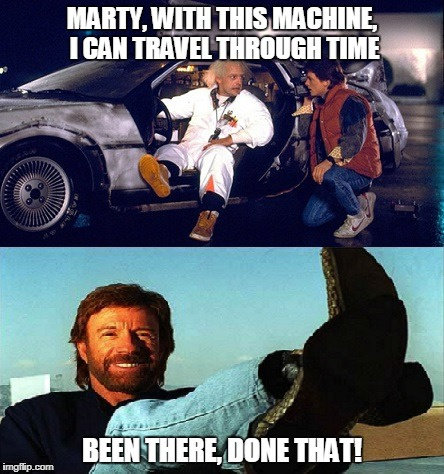 Time is not a thing, it’s a concept.

Here’s another one to ponder.