I was just doing some invoking, spell work and meditation so was a great time to re scan.
I like my secret

@ErisKissedMeIntoFrog but those that scan me and see my true form will know that others are not quite ready to know or will not quite understand that kind of bond,
Your scan of me has me intrigued

Hello @Xag_darklight and all others! I am interested in a scan to see what you all may see if you are willing. It would be interesting to say the least.

However, I am new, and haven’t scanned before, so I don’t know that I would be able to return the favor. Besides, I gather that scanning is a type of reading, which according to forum rules, I guess I can’t do any type of reading until I’ve been active 3 months.

If anyone is willing, I’d appreciate it! Thanks!

@anon48079295
Bear. then bear headed man. Then bear mind
Bear’s head. Concept of totem
Wild Man hunting through the woods spears hunting running.
Then King bear
Giant big bear brown haired upright at river that flows sideways to him.
Then Man. Who is at the river facing other turns his back on the river and heads to the forest purposefully
Scene parts to a cave on the cave walls painting of tall dark figures Beings. You actually your palm onto the painted Being and then enter the place of the Beings in the darkness. You are then in the place of the dark beings.

What does this mean to you?

Also, when scanning you I got this visual/scene of a tall pale yet red haired woman, she held some kind of sceptre, the sceptre feels like it has a heartbeat but it doesn’t it’s the energy’s vibrations contained it in as if it’s a extension of yourself. The area seems like it’s snowy forest but there seems to be steps leading up to a throne, think of it like the ice queen from snow white, but this is very different in the sense it’s outside in a frost covered nature setting and her energy is spread everywhere almost like her being omnipresent in this space. There’s also the fact there’s what looks like fire elementals moving freely around her.

This is incredible and sounds a lot like the journeys I go on. I can’t say I’ve seen myself in green however I’ve never really though about looking. In reference to the smoke, generally when manifesting there my powers are built from this. I have a strong connection to the Earth and use elements and Earth magick a lot! I also have a bond with the sky. Thank you!

Ahh. Yes. That’s one o f my aspects.
Did yours make sense to you. I got the feeling from the power of that grizzly that as part if you ah totem. Your connection with the Dark secret the cave the gateway

I didn’t exactly understand yours, what did it mean?

The hunting the mind powers of t hg e bear… hunt search.
You find the river
Its not what is enough for you

The river is th e great stream of life.
The bear is you are embodying it’s aspects and characteristics protect wisdom power. The grizzly great power emenation.

The cave is where you go to like a computer room or another doorway t hhe touching of pictures you are connect to other beings in another plane again another passage. 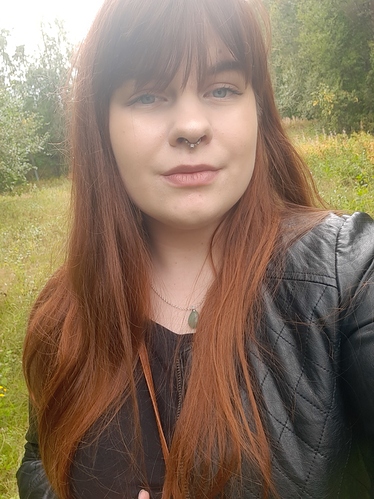 Here’s a link to learn how

Hey! So I did a new scan because… yeah. I think I just scanned what you saw, and thought it was your goddess. I was wrong. PM me!

Im bored someone do me. Ill repay in kind. Lol

I just made a petition to Abaddon. Anyone want to check on me with a scan?

what i see is a moving swinging golden fire in a big torch that is near a corner of a marble golden temple the whole room seems illuminated by this golden fire,the place feels cozy,theres white light sparks that gives me another picture of the temple,in the center theres a portal.

this had to do with lucifer as he manifest there from formless darkness the fires are swinging faster and faster i see leafs blowing like theres a storm there.

i feel you are rising but you must rest a part of yourself and keep moving faster and higher but what you need the most is to overcome yourself and your limits.