Yeah, as counterintuitive as it sounds, Haitians aren’t your way in.

E.A himself warned against going to Haiti in fear of people getting scammed in his videos

I don’t completely knock it, especially if strangers are just popping up on your doorstep demanding they buy your trusted, intimate family secrets. I think they deserve to be scammed. There’s no honor in that.

It’s no different than people on the forums seeking quick fixes getting trolled and strung along.

Well thing is,and I’m sorry if this insults any houngans or mambos on this site. I can name a few. Whom generally are Anglo saxon. They act very self righteous and even find it offensive if you even dare to sing the songs in kreyol. They accuse you of disrespecting the religion…etc. Like alot of people,they talk it and cant back it up and tend to be screwups in their own lives. Those who preach light and love are very passive aggressive and two faced. So you dont get much help stateside from non haitians either. I am alot like my main spirit ogou feray. I take crap from no one and show my anger

Yeah dude I posted this somehwere else how the religious catch a lot of flac for a lot of the same behavior you’ll find in the magical community; backstabbing people with secret vendettas who would rather kick you then pick you up while you’re down.

However, I wasn’t suggesting @Voodooking seeking help from non-Haitians. That could potentially end up being worst in some cases. (like you described). You just gotta be vigilant and meticulous when picking out who’s full of shit. Stay independent.

@anon80443026. I have only met one person who lived the Haitian voodoo life so far. Legba let me meet him or the LWA in general he told me things that helped my practice

Hey voodooking how long have you been involved? Gone the formal route? Did the lave tet,go as far as manzo? Or just work with your met tet and escort independently?

@Chaossentry I’ve been involved for some time now. I’ve done part of the path working in the Haitian voudan course and working my way to different LWA.

Mind if I ask what course you are speaking of? I always wondered why spirits from other Pantheons dont have this level of contact and power on the physical realm. I honestly feel that say for example like the norse gods and entities I work with. Because they are not blooded enough or sacrificed too like the palo and voudon entities are. It leaves them lacking. If the same practices were done today. It would be equal

Nice to see this on here

There is a voodoo course from E.A on his site

How has that worked out for you so far? Anything of interest occur since using his method for working with the lwa?

You work with them often?

Just popping in for role call. I will share a story with you good folks here as it may echo deeply for some.

I was born into a home that is Catholic with an Episcopal touch, despite the heavy Judeo theistic presence there was always room for the supernatural. The truth about root conjure and tradition is that its remedies and medicines are less spoken of as “Hoodoo” with in these homes, and interestingly that term emulates some of the same pejorative aspects as “Santeria” to the Lukumi tradition.
I was taught remedies from my mother and I had no idea for a number of years that I was practicing a lesser known tradition to my region.
Simple things medicine or mojo bags, laying brick dust, spinning several times to confuse the uglies before entering the house these are some of the practices I remember as a child that I have also seen others writing more about in recent years.
A close relative of mine worked in Haiti as a missionary doing “God’s work” which was usually a way to coerce the impoverished and those in dire straights to abandon their ancestral and cultural faith in a trade to adopt Christianity for necessities like food, clothes, and shelter. At the time this individual really thought he was helping not seeing the damage he was partaking in. He had sent an assortment of wood carvings tp the United States, which I still have. This included a Papa Legba statue and two statues of the Ghede twins. When I would get out of hand my mother would take all my toys but she never would take my Legba or Ghedes.

Fast forward to my teens when I first visited a Botanica, the little old lady Rosa who ran her shop had getting strong messages from my spiritual courts and she began giving me details about my past, present, and future. With out consultation from Ifé or Odù she surmised that I was born to become an Olorisha priest, I took it as a compliment but I honestly had my reservations.

So in my teens which was the mid to late nineties, I started to approach the Lwa, I went to an ancient crossroad and market place that the native americans of my region used to trade, a very historical place. I brought my candles, rum, cigar, cornmeal, and Papa Legba statue. I was a little familiar with conjure due to having worked with the Lemegeton, Black Pullet, and the Verum. I would have never expected such a strong response though, I was guided to get close to both Ogu and Simbi but not before working intimately with the Ghede nation. I began mediumship with the Lwa in my teens. It wouldnt be another decade until the next real step would be taken.

Even though one can be found with out guidance or direction its easy for one to get lost, especially in their youth. I took on a very destructive lifestyle, I wasnt a junkie but I was an Alcoholic drug dumpster at one point in my life. I nearly died in a vehicle accident around 2010, that moment I was shown things that would come to pass that I am still figuring out.

My path became clearer, I understood the necessity of properly learning tradition as it was clearly calling out to me. I received my first Rayamiento in 2012 as a Ngueyo, I became a Tata Nkisi in 2013.

I received Kariocha in 2013, crowned to the mysteries Ogun. Ogun is my father and Orisha who owns my head, all my work here on earth I dedicate to his honor. I love the Orisha tradition, just as I love the Congo tradition, and the Creole tradition but I keep them all separate.

To this day I still work with the Lwa, in my own personal way.

@Voodooking I thank you for this thread

I agree with you, but i think what @anon80443026 was referring to was the Charlatans that charge large amounts of money for “Initiation”, he may even be talking about people who gatekeep the practices. Also i would like to point out that we are all humans, what happens to him may not have happened to you.

You got lucky in the sense of you met decent folk who where happy and willing to teach you, some of us arent that lucky.

I mean im Puerto Rican and other Puerto Ricans keep knowledge from me for not being “Full-Blooded”, its all a matter of where and who you meet

That’s exactly what I’m getting at regarding both the Charlatans and gatekeepers. Of course if you’re lucky enough to forge bonds that break down those cultural walls you might end up in great hands. This is rare, however.

Also, my own family refuse to talk about Vodou with me. Everything is shrouded in mystery and they kind of tip toe around it.

@PaterOctavius888 your welcome. There is very few people I’ve seen on the forum about the LWA

Here for example because I have bloackages in my life. I was suggested legba and ogou. So today being legba day. 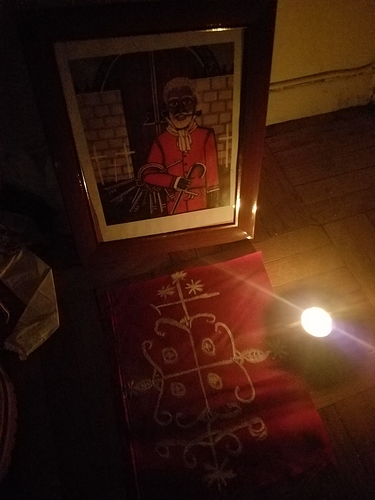