This is one of the coolest astral encounters I’ve had and I’ve been thinking all day about sharing it because I’m still mulling over its’ meaning.
I was at a kitchen counter–in front of me to my left were 5 statues of Buddha (the laughing, Buddha with the big belly) to my right were 5 crystal formations that looked phallic. I was looking at a paper regarding finances and the largest Buddha on the far left had come to life with living flesh…the Buddha was smiling large at me and laughing silently. He was ancient. His right hand that had been touching his temple in a mudra symbol moved and opened- and extended to me. I was very happy and told the Buddha ‘thank you’ for something that happened for me and I gave his hand, which had grown very large a high five. He smiled even larger at me, his eyes remained closed because he was fully smiling with his mouth open, but the Buddha was living.
As I went over this during the day it occurred to me that when I ‘see’ Belial in my mind’s eye, He’s always been short, smiling and laughing with a big belly. I’m feeling more and more like I had this interaction with Belial and He chose to take the form of Buddha, because phallic shaped crystals don’t really go with Buddha but I can see that coming from Belial.

Take in mind that is not the Buddha. Is Maitreya, is what today’s society has reach. Is the symbolism of the right hand path. So yeah, is the dormant state of folk.

thanks I didn’t know that

5 statues of Buddha (the laughing, Buddha with the big belly) 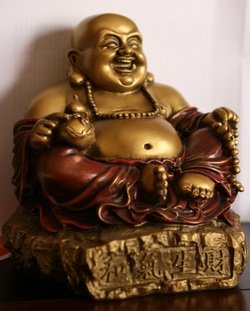 I think this is the statue you mean. Contrary to popular belief, this is not Gautama Buddha, but a Zen Monk named Budai who became incorporated into the Zen Buddhist Pantheon. Being a Theravada Buddhist myself, while I do believe in a historical Budai, who may have entered Nirvana, I don’t believe that he’s of any much use to us now.

Take in mind that is not the Buddha. Is Maitreya, is what today’s society has reach. Is the symbolism of the right hand path. So yeah, is the dormant state of folk.