Hello all! To make a very long and complicated story short, I channeled an odd symbol today. This symbol was relayed to the paper by my own hands, but I wasn’t in the drivers seat if you’re catching my drift. During my journeys beyond, I often see and hear strange things. This one is different. It doesn’t seem like much, but I attempted to recreate it many times and failed. It may be nothing, it may be something of my own subconscious creation, but then again it may not be. Has anyone seen anything like it before? Once again, I’m not claiming to have discovered the holy grail or anything. But maybe it’s something new, maybe not. 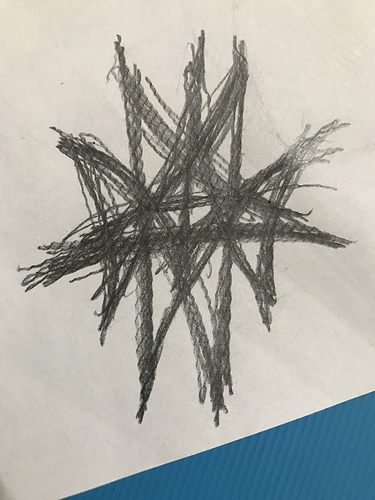 Was this channeled as an automatic-drawing or did it appear to you then you drew it afterwards?

Automatic drawing. It was almost like something was drawing it for me during the channeling.

Have you tried meditating on it’s meaning?
I do know that people have had sigils Drew out for them by spirits before but I dont have much info on your case

What spirit did you channel?

You should meditate on the sigil and search for its meaning if it was an automatic drawing.

It was almost like something was drawing it for me during the channeling.

If you felt like a spirit guided your hand while drawing this you should charge it and ask who was with you.