@Teras390 sorry to bug you but have you had the chance to type up what you were talking about?

I got mine a few weeks ago. It’s really awesome and no @Fallen_Human When I got mine and just placed it on the ground it was amazing. I felt so much energy from it. It felt extremely charged and good!

I had multiple experiences with mine from just energy to things manifesting. It diffidently helps with the evocations that’s for sure! So happy I was poked by Belial to get it. 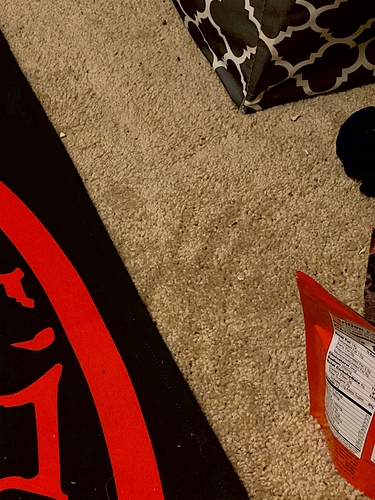 Just an example I saw when I woke up one morning. Sorry for the mess though, I just moved and was organizing stuff.

Just an up date for those that are curious, I decided to do a meditation/evocation to Azazel and as soon as I got his sigil in the circle it charged it 3 fold. Something about him and that circle really amplified things.
When I first gotten this yes I had experiences including seemly being in a different world entirely (really odd feeling) but this was my first time putting his sigil in the circle and welp definitely a interesting mix! 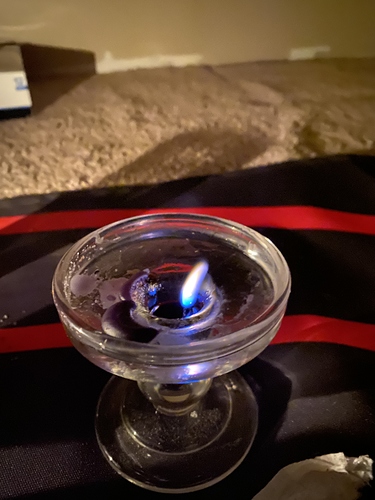 And another interesting tib bit to add is when I was doing this the flame on my right turned almost completely blue and had a completely different feel to it compared to the others.

I really want it now lol.

Trust when I say it’s worth it

Like I have said, I was skeptical about this. Even after watching three videos on this I still didn’t know. But Belial poked me about three in the morning and welp if he damned it into my existence it must be good and well he is right.

Something about him and that circle

The UC is based on the Circle of Pacts from the Book of Azazel. Azazel had a hand in making it so that would make sense

But at the same time the Qliphoth Circle looks so appealing too! Ughhhhhhhhh!

AND I’m working with the Qliphoth Right now

I have more or less, here’s the thing with these two according to me:

The universal circle - amplifies your energy more or less and also seemingly amplifies your psyhic abillities when you are in it. It also works as a direct gateway to the crossroads if you know how to go there.

Like the the name suggests it can be used for pretty much anything as far as evocation goes and I am willing to be say invocations too. It can be used to for consecration as well irregardless of path as far as I am concerned, I say this as I’ve used it in many workings within the Norse Tradition as well as many others, it, so far, works like a charm.

Doesn’t anchor the energy you are trying to summon in the circle, neither does it hold the energy that’s being summoned in place; inside the circle and you, as well as outside the circle. It works for pretty much any entity but if you want to summon very specific entities for invocative work, it works… meaning it does the trick but the effect is not as potent as that of f.e. the Qliphothic Circle. In terms of anything related to the Qliphoth I recommend;

Pro’s sepcifrically made for the Qliphoth and its denizens along with their legions, works as minor portals to gain access to the individuial spheres. It also works for Invocation as well as Evocation of Qliphoth and facilitate the manifestation of their energy, and unlike the Universal Circle; anchors the energy of the speicific Qlipha inside the circle and in your temple at the point of evocation/invocation/ transvocation.

Using this circle for any oher than the Qliphoth yields so and so results, it works ok, for entities belonging to the “demon” class, however it is more or less optmized for the Qliphoth and really works strongly to manifest their current efficiently. It can be also be used as a means for soul travel to the specific spheres unlike the univeral circle, which you you have to bring a gateway into it, in order to go wherever you wanna go.

So what you choose between is more or less a general solid circle that can be used for a broad variety of things, but can’t anchor energy in or outside the ciricle; vs a highly specialized powerful circle for a specific current that works really well for that.

Hopefully this review helps you decide which circle to choose. Let me know what your choice is.

I’m currently working the Qliphoth and I’ll be working demon class spirits for the rest of my life afaik.

But soon enough I’ll be in the Egyptian current too but from the perspective of the Draconian Tradition.

So then the UC is probably best even still huh?

For Qliphothic work go with the Qliphothic circle, for just about anything else, go with the universal one. They both have their very unique pro’s and cons sort of.

I’d say that if you are planning to finish the Qlphothic pathworking @Dragon_Witch , then get that circle for now, if you plan on to move on into other paths soon enough, then the UC is the better option for now according to me.

However, you are your own master indeed

Then UC it is

If it weren’t pricey I would get both, honestly.

As a draconian practitioner I love the stuff Asenath puts out and the QC is appealing for those reasons.