Undiscovered Part of The Astral Plane

Hey guys, I’m currently doing Flame Sixteen from EAs Initiation of the 18 flames and the assignment is…

Through Astral travel and evocation, discover a undiscovered part of the astral plane inhabited by powerful entities. Obtain their hierarchy, powers, names, and sigils of no less than 33 spirits.

So I have just done the first one, and want to share it with you guys:

The Wegans
A group of Demonic beings who are Destroyers. 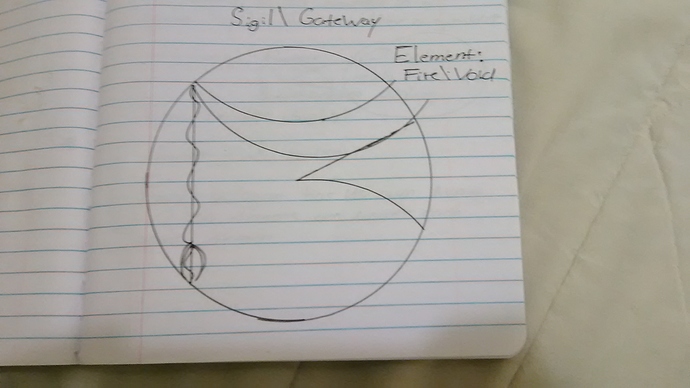 Incantation: (Name of Demon), by the power of Naos, rise!

Appearance: Wendigo like creatures with red eyes. Bodies covered in a black liquid. Similar to the symbiote in Spiderman 3.

Hierarchy: They behave like a pack of wolves so their hierarchy is a bit undefined. But Each Wegan has its own army of 2,500 Demons are under each head demon.

Appearance: Red eyes with body made of darkness. Holds a sword in his Hand.

Power: He is a war demon Who wreaks absolute destruction. But unlike the demons of Mars, Hey does not kill with/from passion, but with absolute non attachment. He can teach the Black Magician to do the Same.

Command power: He commands an entire legion of non attached demons that excell in killing in cold blood.

Appearance: a beautiful Queen wearing red robes with Red eyes. Sits on a black throne in the middle of what looks to be a entire plain of molten Lava.

Powers: Can help with matters of love. Keep in mind that this “love” is a more political kind of love with absolute non attachment. A playing for keeps kind of thing. It will only have a strategic advantage, like in war.

Can help in War by strategic thinking. Manipulating the emotions to your advantage. Your Adversary having a change of heart, then striking them in the chest. Fatal blows.

Authority. Teaches how to rule with an Iron Fist letting Karma effect the others that are still attached to morals.

Personality: She is the embodiment of “all is fair in love and war”. Having transcended all ethics, she will go to the most ruthless means to tame your enemies. She embodies Ascent: doing what is necessary at any time, for any reason, at any place. She is loving, and ruthless at the same time.

Energy: She has a Very feminine, loving energy at the surface. But underneath that is the cold calculating ire that drives military generals to kill the opposition at all costs.

Incantation: “Use the gateway to call me.”

Vision: A tomb with the Gateway inscribed on the Stone. The stone rolls away by itself and I see a dark cave. I enter and find a Armored Werewolf sitting on a golden throne, in a golden palace, soaked in blood. Women that have been killed are set up as living fountains forever regergitating their own blood. Blood runs down the pillars forming into rivers in either side. Xarach sits on his throne with red eyes that have no pity and can strike at any time.

Appearance: A muscular werewolf in blood stained armor. With sharp fangs and claws. A very blank, plutonian stare covers his face as if time stopped and he is drunk with the blood of his enemies.

Parting Words: Seek it (Ascent) out with the same Murderous rage I use to sacrifice my foes upon the cold altar of Pluto. Instinct is your key, as is non attachment.

Appearance: Shifts forms through the darkness. Once he solidifies, Hey Appears as a Werewolf warrior in golden armor with a body of Darkness, and Dark Violet eyes. He is Ancient and powerful.

Command power: He has a legion of servitors that are not weak in the least. His servitors are 800 in number and carry swords and spears. When summoned, they swarm the black magicians enemies like flies and run through his spiritual bodies with their weapons causing leakage of Prana/vital life force.

Powers: Metallurgy. The use of the energies of Plutonium. Science and the Arts. How they can be used to destroy your enemies. The use of Plutonian energies in sync with the Moon. Conjunctions of the Sun and Pluto to put an end to currents that have up to this point been unstoppable. Time travel.

Energy: A scientific mind that is completely non attached to the outcome. A Dr. Jekyll/Mr Hyde kind of vibe. The ideal combination of a Warlord and a Mad Scientist. Plutonian energy knows no bounds or limits and when applied to the arts, what once was pure and gentle becomes deadly. Music is used to kill. Science is used to kill. Pluto is the farthest from the Sun because spiritually, plutonian things are farthest from the light of reason, compassion, etc. “Once you leave your mark, you never know where to stop”

Note: Im scrying/structuring the knowledge from the Astral so it may sound a little disjointed till I get the hang of directly getting knowledge lol.

Appearance: A thick, blue holographic angel with a black/white Aura. A serious, evil look on his face. No smile.

Energy: Has transcended morals and anything that can be called Human. Has no connection to the Human condition whatsoever.

Powers: Can teach the magician to transcend and control the streams of power called Karma, which normally work against him. You must be very specific about a time limit for Timels influence. If left unchecked, He will literally destroy you and your life as you know it. But he will grant you all the power necessary to rebuild it back up in a day.

Embodies emotional detachment. If there is a goal you have, there will be no “but I can’t!” or “something is stopping me” you will know what to do and will have no qualms about doing it.

Command Power: He is a force unto himself. He has no need of legions.

Demon of Poverty and Ascent

Appearance: A nebulous blob at first. Then materializes into a Golden angel holding a ball and chain in his right hand, representing the limitations that bind you, and a two tailed whip in the Left hand, representing the slavery that you put your self under And the drive toward Ascent. He then materializes finally into a Red and black Demon with a form of a man and a Violet crown of Authority on his head.

Nature: The epitome of the negative emotional principle. Absolute coldness. A dry, barren, Icy wasteland. A aura that kills all blossoming of emotional Life as emotions are seen as a petty hindrance to Ascent because of the attachments it brings.

Power: Can give the magician a cold stealth like nature. His greater power, however, is to show the magician how to awaken the Ancient God, himself, within using Violet light of Darkness. How to attain a deep connection with spirituality without the emotional attachment. Plutonian balance. Becoming Limitless.

Connor Kendalls new turf might be a good spot to discover a new part of the astral plane.